We seek out world-class entrepreneurs so they can mentor you in a power-packed interview full of strategies, stories, and insights. Visit: 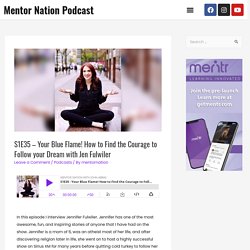 Jennifer has one of the most awesome, fun, and inspiring stories of anyone that I have had on the show. Jennifer is a mom of 6, was an atheist most of her life, and after discovering religion later in life, she went on to host a highly successful show on Sirius XM for many years before quitting cold turkey to follow her passion of being a standup comedian.

YES.. You heard that right. Following her passion led her to write her new best selling book, Your Blue Flame: Drop the Guilt and Do What Makes you Come Alive. Resources: jenniferfulwiler.com. S1E34 - Develop Children into Entrepreneurs with Cameron Herold. Apple | Google | Stitcher | Spotify In this episode I interview Cameron Herold.Cameron almost has too many accolades to cover in the notes. 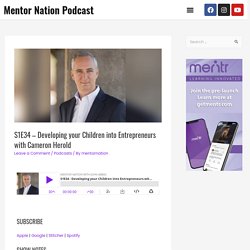 For starters he helped build 3 companies into the largest of their kind including 1800-GOT-JUNK and Gerber Collision. He has written 5 best selling books including Free PR, Meetings Suck, and The Miracle Morning for Entrepreneurs. He founded the COO Alliance which is the largest mastermind the the second in command of large companies. S1E33 - Zero to $20 Million in 1 year with Kevin Zhang. Apple | Google | Stitcher | Spotify In today’s episode I interview Kevin Zhang. 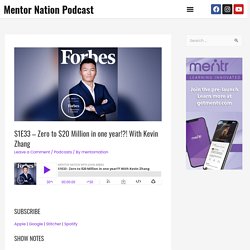 Kevin is one of the brightest people I have ever spoken with for being in his early 20s. After watching his parents struggle working multiple jobs trying to provide for the family as Chinese immigrants, he decided to do some thing different in order to reach the American Dream. S1E30 - How to create an environment to bring out your best self with John Abbas - Mentor Nation Podcast. Apple | Google | Stitcher | Spotify In this special 30th episode, I go solo and speak about something that has been more instrumental to my own success than anything else.. 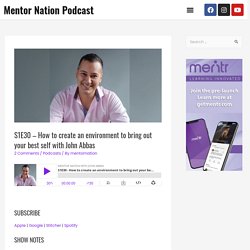 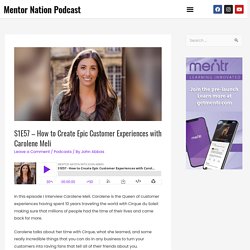 Carolene is the Queen of customer experiences having spent 10 years traveling the world with Cirque du Soleil making sure that millions of people had the time of their lives and came back for more. Carolene talks about her time with Cirque, what she learned, and some really incredible things that you can do in any business to turn your customers into raving fans that tell all of their friends about you. Resources: How to Rewire Your Mind for Success with Richard Brooke - Mentor Nation Podcast. In this episode I interview Mr. 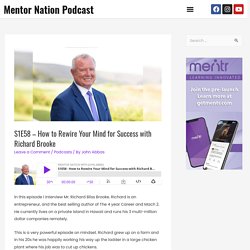 Richard Bliss Brooke. Richard is an entrepreneur, and the best selling author of The 4 year Career and Mach 2. He currently lives on a private Island in Hawaii and runs his 3 multi-million dollar companies remotely. This is a very powerful episode on mindset. S1E53 - The Mindset and Habits of a Self Made Millionaire with Rory Douglas - Mentor Nation Podcast. In this episode I interview Rory Douglas. 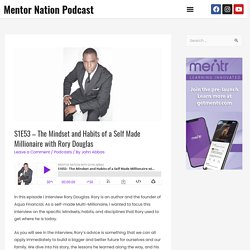 Rory is an author and the founder of Aqua Financial. As a self-made Multi-Millionaire, I wanted to focus this interview on the specific Mindsets, habits, and disciplines that Rory used to get where he is today. As you will see in the interview, Rory’s advice is something that we can all apply immediately to build a bigger and better future for ourselves and our family. We dive into his story, the lessons he learned along the way, and his specific strategies that led to a breakthrough in his bank account. Take good notes and enjoy the episode!!! Resources: Rory Douglasrorydouglas.net Instagram @Rorykdouglas. S1E08 - Chase Your Impossible Dream - Mentor Nation Podcast. Apple | Google | Stitcher | Spotify Today’s episode is a fantastic story about chasing a dream despite the difficulty, and getting creative despite the setbacks. 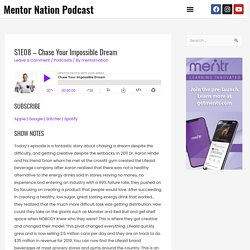 In 2011 Dr. Aaron Hinde and his friend Orion whom he met at the crossfit gym created the Lifeaid beverage company after Aaron realized that there was not a healthy alternative to the energy drinks sold in stores. Having no money, no experience and entering an industry with a 99% failure rate, they pushed on by focusing on creating a product that people would love. After succeeding in creating a healthy, low sugar, great tasting energy drink that worked… they realized that the much more difficult task was getting distribution. Zero to $20 Million in one year!?! With Kevin Zhang. S1E01 - The Origin Story - Mentor Nation Podcast. S1E02 - From Jail to Juggernaut: The road to 8 figures - with Chris Cavallini - Mentor Nation Podcast. Far Beyond a ‘Rags to Riches’ Story… This episode turned out to be much more powerful and in depth than I expected. 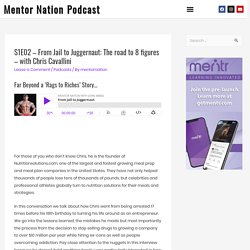 Chris has one of the most incredible rags to riches stories I have ever heard. For those of you who don’t know Chris, he is the founder of Nutritionsolutions.com, one of the largest and fastest growing meal prep and meal plan companies in the United States. They have not only helped thousands of people lose tens of thousands of pounds, but celebrities and professional athletes globally turn to nutrition solutions for their meals and strategies. S1E03 - The Keys to Building a World Class Culture in any Organization - with Erin Krueger - Mentor Nation Podcast. Scaling World Class Culture from Solopreneurship I was so excited to interview Erin personally because of her insane reputation and accomplishments, but more importantly, who she is as a person. 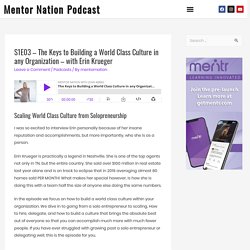 Erin Krueger is practically a legend in Nashville. She is one of the top agents not only in TN, but the entire country. She sold over $100 million in real estate last year alone and is on track to eclipse that in 2019 averaging almost 80 homes sold PER MONTH! What makes her special however, is how she is doing this with a team half the size of anyone else doing the same numbers. In the episode we focus on how to build a world class culture within your organization.