NZ in the 19th Century 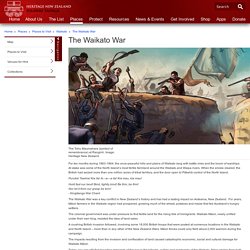 At stake was some of the North Island’s most fertile farmland around the Waikato and Waipa rivers. When the smoke cleared, the British had seized more than one million acres of tribal territory, and the door open to Pākehā control of the North Island. Purutia! Tawhia! Kia ita! Maori TV: The Prophets. NZ Historic Places Trust: A journey through the Waikato War. Topic specific resources available in the Memorial Library.