Attorney Melvin A Cook is a skilled lawyer, qualified business expert, and a deeply personal advocate for Utah families suffering through separation and divorce.

UNCONTESTED DIVORCE IN UTAH EXPLAINED. Back to School can Mean Less Time with your Child - Melvin. The beginning of a new school year is an exciting time for kids and can be a stressful time for parents especially for divorced parents attempting to co-parent. 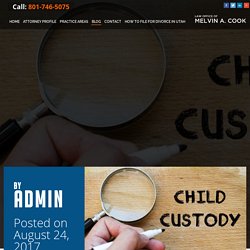 Many questions arise concerning visitation, expenses and even the first day of school. These are all things that need to be discussed prior to the first day. During the summer, kids schedules are more flexible because they do not have to go to school and there are less activities to worry about. When school starts, that all changes.

The best thing you can do is to review your custody and visitation agreement at the beginning of the year with your Salt Lake City child custody attorney. Kids ask Questions. Understanding the requirements for alimony in Utah. Salt Lake City Social Security and Disability Benefits Attorney. How do you know when is a good time to untie the knot? Salt Lake City Domestic Violence Attorney. Living together and your property rights - Melvin A. Cook. Signs that You are Dating an Abuser - Melvin. Can adultery impact alimony in Utah? Countless of marriages in Utah end up in divorce because one of the spouses was unfaithful. 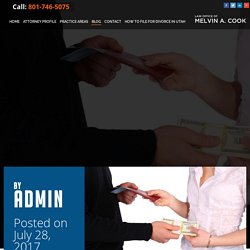 Infidelity will definitely affect alimony if you can prove to the judge that your spouse was unfaithful. A Salt Lake City alimony attorney can help you gather the necessary evidence and explain in more details how laws in Utah may favor your case. However, if you have been together for a long time, chances are cheating will not become a factor that determines alimony.

Define adultery in Utah It’s basically when someone married has sexual intercourse with someone else other than the spouse. Gathering evidence. How Prenuptial Agreement Attorney Help To Salt Lake Citizens. Paternity is Not a Dirty Word - Melvin. Having a child can be an exciting time for not just the mother, but the father as well. 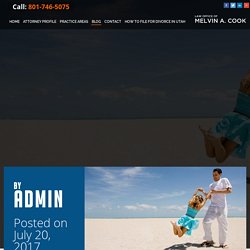 Bringing new life into the world; a life that depends on you can give you great pride. Most fathers dream about playing catch with their sons, or taking their daughters to the daddy-daughter dance. Most men truly enjoy being fathers and love every moment of it, good times and bad. But when they are forced to stay away from their kids by the mother, it raises a whole new set of problems. Failure to Pay Child Support Brings Severe Consequences - Law office of Melvin A. Cook. Paying child support is a responsibility any decent parent would do without thinking twice. 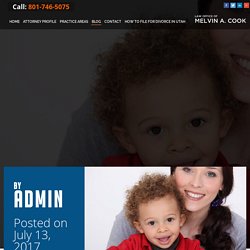 The well-being of your child trumps your personal feelings towards the other parent. All good parents want to see their children taken care of, and are happy to provide for them the resources they need in order to make that happen. Yes, it can be painful knowing that your money will be entrusted to a person you probably do not get along with at this point, but being a responsible parent is job number one in your child’s eyes.

They are not at fault for any bad blood between you and the other parent, and they should not have to suffer because of it. Common mistakes to avoid during a divorce - Melvin A. Cook. Divorce is a difficult journey for many couples. 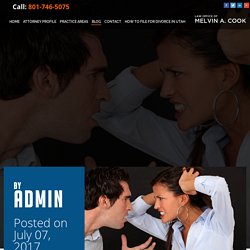 They build their lives together and shared so many things over the years. Now that things are over, it’s heartbreaking taking a more individualistic approach to life but it’s the best thing you can do for yourself and your children. While the circumstances surrounding a divorce can be different, there are some general things you should keep in mind when taking that big step. Nobody said it’ll be easy but it’ll get easier as you walk. When in doubt, contact a Salt Lake City divorce attorney to advise you on the best course of action. Common Law Marriage and Widow’s Social Security Benefits - Melvin. 20 C.F.R. 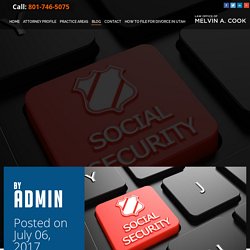 Section 404.726 provides that Social Security recognizes common law marriages if they are valid under certain State laws. Common law marriages are marriages that are recognized by the law of a state even though no formal marriage ceremony was conducted. Utah recognizes common law marriage; however, one must go through certain steps to have it judicially or administratively recognized. Utah Code Section 30-1-4.5 provides that a marriage that is not solemnized shall be legal and valid if established by a court or administrative order during the relationship, or within one year after termination of the relationship.

Salt Lake City Adoption Attorney. Though they can sometimes be bittersweet, most of the adoptions I have seen over the years are happy occasions. 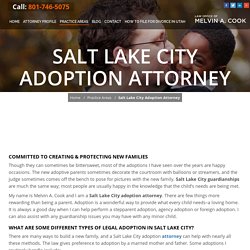 The new adoptive parents sometimes decorate the courtroom with balloons or streamers, and the judge sometimes comes off the bench to pose for pictures with the new family. Salt Lake City guardianships are much the same way; most people are usually happy in the knowledge that the child’s needs are being met. Salt Lake City Workers Compensation Attorney. Committed to Protecting the Rights of Injured Workers in Utah Ever since the early 1900s and the Great Trade-Off, when laborers gave up the right to sue employers for workplace injuries in exchange for no-fault insurance, workers compensation insurance law has effectively protected workers in Davis, Weber and the surrounding counties. 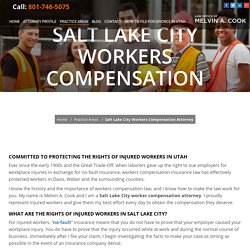 I know the history and the importance of workers compensation law, and I know how to make the law work for you. My name is Melvin A. Cook and I am a Salt Lake City worker compensation attorney. I proudly represent injured workers and give them my best effort every day to obtain the compensation they deserve. Things to Consider Before a Private Adoption - Melvin A. Cook. Deciding to adopt is a major decision for all parties involved. 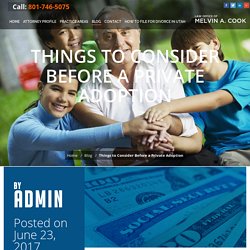 The birth parents are giving up a child and the adoptive parents are taking on the responsibility of welcoming a new child into their home. It can be an emotional time for everyone involved, especially if the child is older. The process involves a lot of legal paperwork that is best explained by an Salt Lake City adoption attorney who can ensure everyone’s best interests are met. Biological Parents. Grandparents Visitation Rights in Utah. Children are always looking forward to spending time with family. 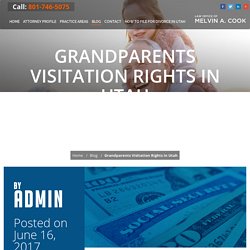 Whether parents, siblings, cousins or grandparents, they are all important to them, specially grandparents, as in most cases they provide a tremendous amount of emotional support and care for their grandchildren. The Effect of a Second Adoption on Childhood Disability Benefits - Melvin. A person may qualify for childhood disability benefits based on the work record of a parent who is receiving social security retirement benefits.

Many instances like this occur based off of looks, or when two people happen to be in close quarters together for a certain time period (eg, camping or weekend ski trip with friends). While having fun and being totally relaxed, you may have an instant physical attraction to someone. That attraction may blur your judgment and try to pass itself off as love. Then three months down the line you realize you have no clue who the other person is! Lack of Communication Couples often go through a phase where they barely talk to each other. Cheating – Physical and Emotional It’s one of the main reasons people hire a divorce attorney – their spouse cheated on them.

Salt Lake City No-Fault Divorce Attorney. In 1969, California broke new ground by allowing no-fault divorces. In 2010, New York became the last of the 50 states to allow them. Build Healthy Relationship with the Advice of Paternity Attorney Salt Lake City. Utah has a national reputation for being a place with very limited paternity rights. Until recently, a wife could even put a child up for adoption without giving notice to the husband.

While the state legislature is just now becoming aware of this inequity, I have been fighting for fathers’ rights my entire career. An Individualized Determination in Childhood Disability Claims - Melvin. The former regulatory approach to childhood disability cases provided that children needed to meet or equal one of the “listed” impairments promulgated by the Commissioner of Social Security (formerly the Secretary of Health and Human Services) in order to qualify for benefits. The “listings” for adult impairments are a defined set of medical criteria for each body system that are conclusively presumed to qualify a person for disability benefits. Under Social Security’s five-step sequential evaluation process for adult disability, the listings come into play at step three.

Salt Lake City Alimony Lawyer. Utah courts award alimony if one spouse earns less than the other. That rule seems simple enough, but setting both the amount and length of alimony payments can be very complicated. Joint Custody and Child Support - Melvin. Unfortunately, for some, marriages don’t work out. When that happens it’s emotional enough. But when there are children involved, emotions can run even higher, and in some cases become volatile. Not Paying Child Support Can Land You in Jail - Melvin. When a judge tells you to pay child support, it is considered an order by the court. Failing to do so is known as being in contempt of court. If you are late or refuse to pay child support, the other parent can ask for a hearing and request the judge hold you in contempt of court.

Salt Lake City Social Security Disability Attorney. Child Custody Attorney Salt Lake City. Children are by far the most important asset in any marriage. Studies consistently show that children fare much better when they have consistent contact with both parents, provided they can each maintain a loving, supportive environment. Utah law recognizes this principle and encourages joint custody if at all possible. What is Paternity? - Melvin. When you hear the word “paternity” you most likely think of three-ring circus episode of Maury Povich where the mother is “accusing” different men of being the “baby daddy.” The results come out, Maury opens the envelope and once again reads the verdict – “In the case of little Samantha, tests shows that Dominic is 99.99 percent … NOT the father!”

Salt Lake City Child Support Attorney. If you are taking care of children, the other spouse nearly always pays child support. Setting the amount is generally a matter of applying a formula, although there are some deviations in some circumstances. Collecting and enforcing child support in Salt Lake City can be an entirely different matter. Reduction of Social Security Disability Benefits Due to Receipt of State Disability Benefits - Melvin. A disability claimant from Colorado was found to be disabled as of August 20th, 1984.