The 50 Most Porn-y American Apparel Ads Of All Time. It’s hard to argue with the fact that American Apparel has built an empire on little more than moderately good underwear, T-shirts, and other basics–sold via their incredibly racy ad campaigns.

The Los Angeles-based company regularly depicts young women in sexually-charged positions, topless, pantsless, and borderline naked. MORE: The 40 Most Naked Celebrity Instagrams of All Time Certain ads are harmless, while others—like the one that depicts a model named Maks who hails from Bangladesh, a part of the world consistently embroiled in hot water because of poor working conditions for factory laborers, and is shown completely topless. The NSFW History of American Apparel's Ads. Update, 8/19/16: Despite declaring bankruptcy and ceding ownership to its former creditors, industry site Business of Fashion reports that American Apparel is still having a rough go of it. 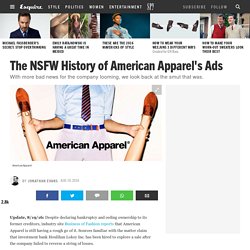 Sources familiar with the matter claim that investment bank Houlihan Lokey Inc. has been hired to explore a sale after the company failed to reverse a string of losses. It's more bad news for a company that's dealt with a lot if over the course of the last year. So, just like we did when news of the bankruptcy first hit, let's take a look back at the glory days. The porny days. The whole NSFW history of American Apparel's egregiously over-sexualized advertising. Questia. Sex sells why do consumers buy o walsh. Scent Beyond Sex: How Luxury Fragrance Marketing Is Changing. The marketing behind luxury fragrances is progressively being adapted to the new era, as appealing to the senses becomes paramount, writes Mark Izatt of Cream UK. 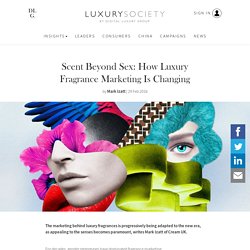 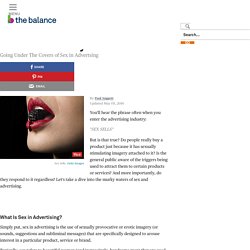 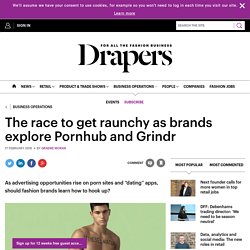 And it’s safe to say that the fashion industry has certainly explored its sexuality. Who can forget Calvin Klein’s suggestive ads featuring a topless “Marky” Mark Wahlberg posing with a “handful” of his CK underwear, or Armani’s steamy shots of a semi-naked Victoria and David Beckham with a cameo from “golden balls”, or Tom Ford’s controversial Gucci images featuring pubic hair shaved into the brand’s logo?

We’re constantly confronted by the gender power asymmetry afforded by the male gaze: where women are faceless, personality-lacking creatures of body parts for consumption, and where women seem to have no control over their portrayal. Simone Steenberg is a young photographer who’s reinventing the patriarchal representation of the female body with her book Tales of Girls. “I explore the female body in interaction with clothes in a sculptural and performative way,” explains Steenberg. “I produce hyper-sexualized images of women that function in a subverting and confronting way, giving empowerment to the photographed women, their bodies and sexualities.”

“Everything is reaction inducing.

The fashion industry and advertorial regulation standards have endured a rather volatile relationship for quite some time. The desire to seduce, sell and garner attention has lead many a fashion label to resort to suggestive, even extreme visual methods – be it via sex, violence or social commentary – to get their product noticed and make headlines in the process, for one reason or another. American Apparel Embroiled in Legal Battle Over Anti-Objectification of Women Campaign. Earlier this year, Badger & Winters Group embarked on a gender equality in advertising initiative. 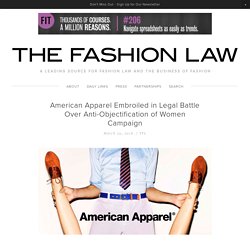 As part of the campaign, the New York-based advertising agency released the “We Are #WomenNotObjects” video on YouTube, which calls attention to a number of big-name brands that Badger & Winters believe have been exploiting women in their ad campaigns. And troubled Los Angeles-based retailer, American Apparel, is not amused. "The Prevalence of Sexual Imagery in Ads Targeted to Young Adults" by Reichert, Tom - The Journal of Consumer Affairs, Vol. 37, Issue 2, Winter 2003. Badger and Winters founder condemns sexist ads with #WomenNotObjects campaign.

From food companies to fashion brands to Hollywood movies, marketers have breached the final frontier in their search for bigger, more affordable audiences. Sex Sells? Not According To Madonna Badger 06/21/2016. CANNES, FRANCE -- Advertising has the power to effect change both good and bad. Unfortunately, there are far too many ads that objectify women in today's media. Beer ads show only breasts. Shoe ads feature naked models. This Brand Puts Porn on Hoodies. Malcolm Bracey says he’s just your typical 23-year-old living in Madison, Wisconsin. The Midwestern college town isn’t known for being a style capital, despite being the homebase for several fashion retailers like Shopbop, East Dane, and Context Clothing.

Indeed, new research from market intelligence agency Mintel reveals that half (50%) of all men say they don’t pay much attention to advertising, whilst more than one quarter (26%) agree that men are sexualised in adverts just as much as women are. LSN : Briefing : Ab-free zone. FASHION OR PORN?: THE HYPER-SEXUALIZATION OF WESTERN CULTURE AND THE COMMODIFICATION OF SEX. Playboy sales have INCREASED by 30% since magazine stopped publishing naked pictures. Publication launched first issue without any nude pictures in March 2016 Newsstand sales of the magazine have increased in six months since But paid base subscriptions have dropped 23.2 percent Representatives from Playboy says the numbers are according to planThey are encouraged by signs they are attracting new readers.