Either on WAG or ancillary group!!

Profanity Pack. Bill Clinton. The great unraveling of the great American oligarchy. Dropbox. Photo editing. Ramdass. How to Write Effective Letters to Congress. So, you're going to write a letter to Congress? 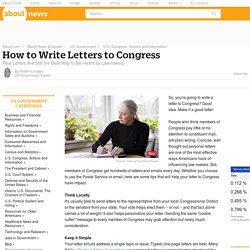 Good idea. Make it a good letter. People who think members of Congress pay little or no attention to constituent mail, are plain wrong. Concise, well thought out personal letters are one of the most effective ways Americans have of influencing law-makers. But, members of Congress get hundreds of letters and emails every day. Think Locally It's usually best to send letters to the representative from your local Congressional District or the senators from your state. Keep it Simple Your letter should address a single topic or issue. Say why you are writing and who you are. Addressing Members of Congress To Your Senator: The Honorable (full name) (Room #) (Name) Senate Office Building United States Senate Washington, DC 20510 Dear Senator: To Your Representative: The Honorable (full name) (Room #) (Name) House Office Building United States House of Representatives Washington, DC 20515 Dear Representative: U.S.

Write Your U.S. U.S. Etsy - Your place to buy and sell all things handmade, vintage, and supplies. A northern white rhino has died. There are now five left in the entire world. This video from the San Diego Zoo Safari Park shows Angalifu, a 44-year-old northern white rhinoceros, who died of natural causes on Sunday. 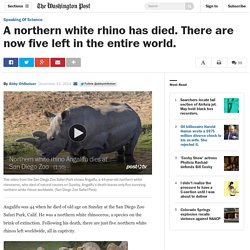 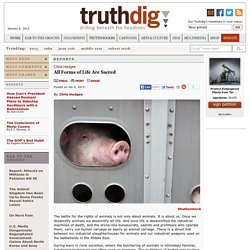 It is about us. Once we desanctify animals we desanctify all life. And once life is desanctified the industrial machines of death, and the drone-like bureaucrats, sadists and profiteers who operate them, carry out human carnage as easily as animal carnage. There is a direct link between our industrial slaughterhouses for animals and our industrial weapons used on the battlefields in the Middle East. Why Are Yellowstone's Elk Disappearing? According to the popular logic, the wolves preyed on elk, keeping the grazers’ populations in check, which allowed dwindling aspen populations, and the beavers that fed on them, to rebound. 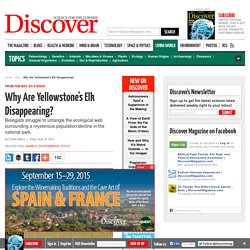 This logic was affirmed in 2007 when Scott Creel, an ecologist at Montana State University, published a study suggesting that the presence of wolves stressed the elk, leading to poor female health and fewer pregnancies. Jim Gath: Horses are always talking to us. After giving up his job as a founding member of USA Today, and holding a succession of stressful jobs, Jim Gath found his passion helping horses. 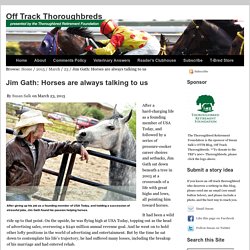 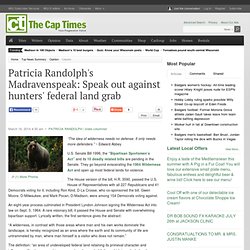 It only needs more defenders.” ~ Edward Abbey U.S. Senate Bill 1996, the “Bipartisan Sportsmen’s Act” and its 10 deadly related bills are pending in the Senate. They go beyond eviscerating the 1964 Wilderness Act and open up most federal lands for violence. The House version of the bill, H.R. 3590, passed the U.S. An eight-year process culminated in President Lyndon Johnson signing the Wilderness Act into law on Sept. 3, 1964. Bold Visions Blog - Conservation in the 21st Century.

Stephen Capra Many people continue to wonder about the fate of our planet and how the conservation community can best be equipped to deal with the realities in America of a congress that is not just broken but angry. 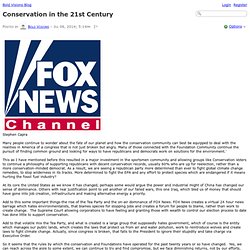 Many of those connected with the Foundation Community continue the pursuit of finding common ground and looking for ways to have republicans and democrats work on solutions for the environment.' This as I have mentioned before this resulted in a major investment in the sportsmen community and allowing groups like Conservation Voters to continue a philosophy of supporting republicans with decent conservation records, usually 60% who are up for reelection, rather than a more conservation-minded democrat. As a result, we are seeing a republican party more determined than ever to fight global climate change remedies, to stop wilderness in its tracks. Pope Francis calls destruction of nature a modern sin. Pope Francis called for more respect for nature on Saturday, branding the destruction of South America's rain forests and other forms of environmental exploitation a sin of modern times. 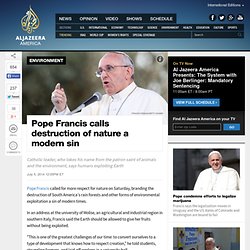 In an address at the university of Molise, an agricultural and industrial region in southern Italy, Francis said the Earth should be allowed to give her fruits without being exploited. "This is one of the greatest challenges of our time: to convert ourselves to a type of development that knows how to respect creation," he told students, struggling farmers, and laid-off workers in a university hall.