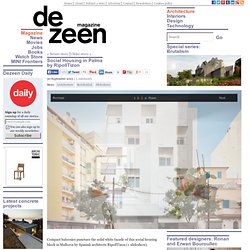 RipollTizon designed the building for low income families in Palma de Mallorca's Pere Garau neighbourhood. It contains 18 apartments, ranging between 35 and 68 square metres, and includes a mixture of one, two and three bedroom apartments. The corner block forms a six-storey tower, but drops down to three storeys on one side to meet the height of surrounding buildings. "The result is a solid column with excavated voids where the openings are presented as scenes stacked upon each other," said architect Pablo Garcia. The building is divided into two different halves - separating apartments for rent from those for sale. The apartments have simple interiors, with white walls and tiled floors, plus each one has its own private balcony. The building replaces a former block of courtyard houses. Photography is by José Hevia. North Star Apartments by Nice Architects features angular balconies. This social housing block in Slovakia by Bratislava studio Nice Architects features a series of protruding balconies that angle towards sunlight whilst blocking out the noise of car traffic below (+ slideshow). 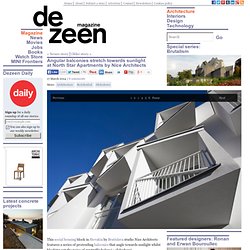 Nice Architects shaped the balconies in accordance with the sun's trajectory across the facade of the four-storey North Star Apartments building, which is located in Senec, a small town outside of Bratislava. The architects were tasked with creating social housing situated on a busy street that would be visually appealing but came at a low cost - €500 Euros per square metre. "The goal was to enrich this locality and create an iconic, easy to remember and original building, as an opposite to the patchy and chaotic surrounding development," said architect Tomas Zacek. 15240_10154506612170603_555502502968063951_n. Hidden Lines by Studio JVM. Amsterdam designer Jeroen van Mechelen of Studio JVM has created a vaulted, cardboard guest room inside a villa carved out of a mountain in Vals, Switzerland. 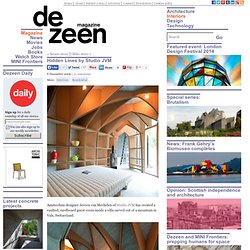 Called Hidden Lines, the angles of the cardboard panels are defined by radials from the circular patio and the contours of the mountain. These were converted into two vaulted rooms and the resulting profiles transferred to the 40mm cardboard panels, then CNC-cut. The design was inspired by a medieval painting and incorporates a guest bedroom and bathroom. Search. Résultats Google Recherche d'images correspondant à. Shotgun House Paintings for Sale. 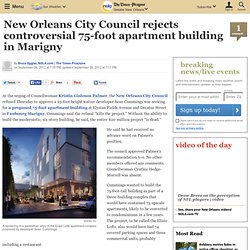 Cummings said the refusal "kills the project. " Without the ability to build the modernistic, six-story building, he said, the entire $20 million project "is dead. " ekistics inc.A rendering of a pedestrian alley in the Elisio Lofts apartment complex proposed by developer Sean Cummings. He said he had received no advance word on Palmer's position. The council approved Palmer's recommendation 6-0. 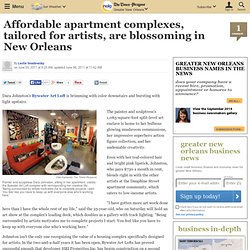 Eliot Kamenitz,The Times-PicayunePainter and sculptress Dara Johnston, sitting in her apartment, credits the Bywater Art Loft complex with reinvigorating her creative life. 'Being surrounded by artists motivates me to complete projects I start. You feel like you have to keep up with everyone else who's working here.' The painter and sculptress's 1,085-square-foot split-level art enclave is home to her bulbous glowing mushroom commissions, her impressive superhero action figure collection, and her undeniable creativity. 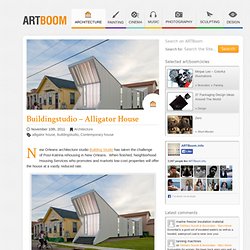 When finished, Neighborhood Housing Services who promotes and markets low-cost properties will offer the house at a vastly reduced rate. “The design is an 872 SF, two-bedroom, bath-and-a-half scheme for Central City, an impoverished inner-city neighborhood situated between the CBD and the Uptown Garden District. Though Central City’s infrastructure was severely deteriorating before the storm and it’s had more than its share of drug-related crime a tough community fortitude abounds. Infill housing is actively taking place on several fronts. Non-profits and faith-based groups have built several dozen homes for new residents hoping to move back.” 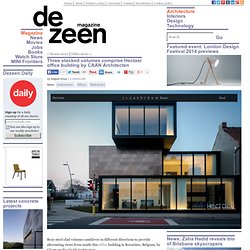 Property developer Hectaar asked CAAN Architecten to design its new offices on a small site next to a busy crossroads, which was formerly occupied by a petrol station. According to the architects, the stacked arrangement of the three storeys is a response to the diverse architecture surrounding the site, including townhouses that abut the street and detached homes set back behind gardens. The cantilevered volumes also help to break up what could otherwise have been a rigid corner by projecting out in different directions to strengthen the building's relationship with the perpendicular roads. Westerdok Apartment Building by MVRDV. Rotterdam architects MVRDV have completed an apartment building at the docklands in Amsterdam, the Netherlands. 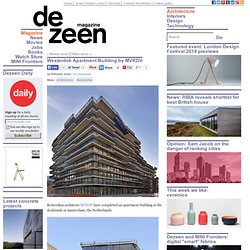 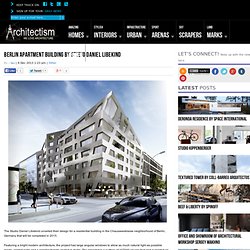 Featuring a bright modern architecture, the project has large angular windows to allow as much natural light as possible inside, canted walls and a ceramic façade coated in metal. The project has a surface of 107000 square feet and is located on the corner of a block offering 73 apartments of various sizes ranging from one to four rooms. The ground floor will accommodate retail areas, there will be a common outdoor area and an underground parking.

The top floor hosts a penthouse apartment offering the ultimate urban living experience with a double-height living room and a patio overlooking Berlin. Access to the living area is made via a stairway and the bedrooms are in the back area leaving enough space for the open plan social areas. Ginko Eco-Quarter / La Nouvelle Agence. 24 Housing Units / Zanon + Bourbon Architects. Architects: Zanon, Bourbon Architects Location: Nancy, France Area: 980.0 sqm Year: 2013 Photographs: Olivier Dancy From the architect. 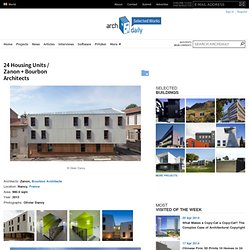