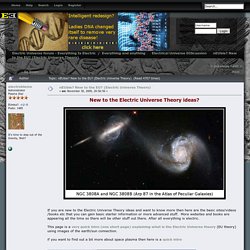 If you are new to the Electric Universe Theory ideas and want to know more then here are the basic sites/videos/books etc that you can gain basic starter information or more advanced stuff. More websites and books are appearing all the time so there will be other stuff out there. After all everything is electric.This page is a very quick intro (one short page) explaining what is the Electric Universe theory (EU theory) using images of the earth/sun connection.if you want to find out a bit more about space plasma then here is a quick intro. Suspicious0bservers - Space Weather. Space Weather News. Magnetic Reversal. Historical Declination Viewer. Magnetic declination is an important concept for accurate navigation. 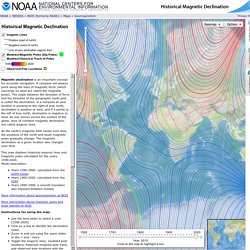 Earth Breathing. It has come to my attention that various companies are using my research to sell their products, claiming they emit the Schumann Frequency. I want to make it clear that I do not endorse any such products and have no connection with the companies selling them. James Russell's excellent film production trailer (above), in full (below) When we consider that the ionosphere surrounding our planet is electrically positive charged whilst the earth's surface carries a negative charge, we must conclude that this amounts to a prevailing electrical tension within the earth/ionosphere cavity.

This tension is discharged when thunderstorms develop in this cavity. The Earth Hums - And Now We Know Why. You can't feel it, but there's a constant, low frequency vibration that's reverberating throughout the planet. 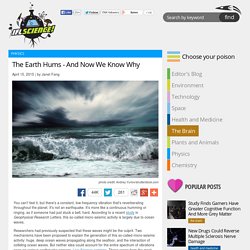 It's not an earthquake. It’s more like a continuous humming or ringing, as if someone had just stuck a bell, hard. According to a recent study in Geophysical Research Letters, this so-called micro-seismic activity is largely due to ocean waves. Researchers had previously suspected that these waves might be the culprit. Two mechanisms have been proposed to explain the generation of this so-called micro-seismic activity: huge, deep ocean waves propagating along the seafloor, and the interaction of colliding ocean waves.

A trio of French researchers led by Fabrice Ardhuin of Laboratoire d'Océanographie Spatiale thought that perhaps the two kinds of waves together could account for the plant’s constant hum. "I think our result is an important step in the transformation of mysterious noise into an understood signal," Ardhuin says. Ecolingual. Crows could be the key to understanding alien intelligence. But seriously, Annalee.... 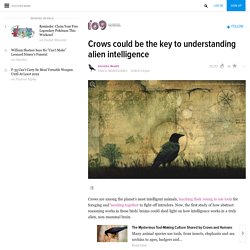 We're all ready for you to write the definitive science fiction novel about crows. In fact, you've been teasing us all far too long now :-) Write it already! Flagged I'm just gonna leave this here.... How to Get High on Soil. M. vaccae, a living creature that resides in your backyard compost pile, acts like a mind-altering drug once it enters the human body, functioning like antidepressant pills to boost your mood. 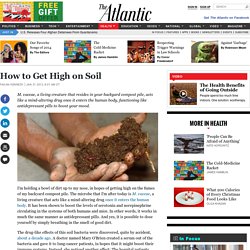 I'm holding a bowl of dirt up to my nose, in hopes of getting high on the fumes of my backyard compost pile. The microbe that I'm after today is M. vaccae, a living creature that acts like a mind-altering drug once it enters the human body. It has been shown to boost the levels of serotonin and norepinephrine circulating in the systems of both humans and mice. In other words, it works in much the same manner as antidepressant pills. And yes, it is possible to dose yourself by simply breathing in the smell of good dirt. The drug-like effects of this soil bacteria were discovered, quite by accident, about a decade ago.

Scientists call it "geosmin," this dirt smell that lends the earthy taste to beets and carrots. The Unity of the Sun, Earth and Moon. NASA illustration Keywords: solar influences on weather, lunar influences on weather, Field-dynamical Earth Model, ozone, glaciation, glacial advance, solar triggers on earthquakes, lunar triggers on earthquakes, solar triggers on volcanic eruptions, lunar triggers on volcanic eruptions, solar-terrestrial physics, alterations in the length of day, alterations in the Earth's rotation, polar wander, polar reversals, polar jerks As with all the web pages on the Living Cosmos web site, this web page is a fully referenced work, and is only a portion of the factual, empirical support for the ideas presented. 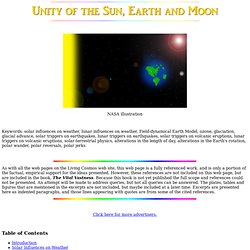 However, these references are not included on this web page, but are included in the book, The Vital Vastness. Because this book is not yet published the full scope and references could not be presented. An attempt will be made to address queries, but not all queries can be answered. Click here for more advertisers. Table of Contents Return to Home Page Introduction. The Need For a New Model of the Earth The Living and Dynamic Earth. Keywords: Field-dynamical Earth Model, geophysics, dynamo theory, terrestrial electricity, geophysical anomalies, polar reversals, polar wander, polar jerks, solar neutrinos, Gaia theory, deep ecology, life and the Earth, latitudes and phenomena, anomalies As with all the web pages on the Living Cosmos web site, this web page is a fully referenced work, and is only a portion of the factual, empirical support for the ideas presented. 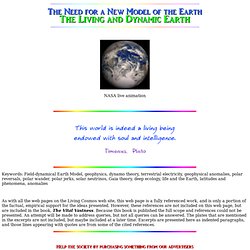 'Memories' pass between generations. Behaviour can be affected by events in previous generations which have been passed on through a form of genetic memory, animal studies suggest. 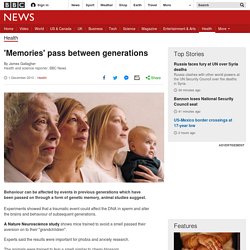 Experiments showed that a traumatic event could affect the DNA in sperm and alter the brains and behaviour of subsequent generations. A Nature Neuroscience study shows mice trained to avoid a smell passed their aversion on to their "grandchildren". Experts said the results were important for phobia and anxiety research. The animals were trained to fear a smell similar to cherry blossom.

Scientists Discover That Plants Communicate via Mycorrhizae. By Dr. 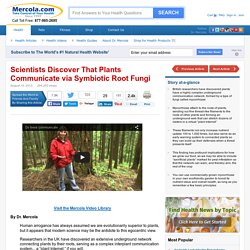 Mercola Human arrogance has always assumed we are evolutionarily superior to plants, but it appears that modern science may be the antidote to this egocentric view. Researchers in the UK have discovered an extensive underground network connecting plants by their roots, serving as a complex interplant communication system... a “plant Internet,” if you will. One organism is responsible for this amazing biochemical highway: a type of fungus called mycorrhizae. Researchers from the University of Aberdeen devised a clever experiment to isolate the effects of these extensive underground networks.

Underground Communications Network Thwarts Infestation The aphid-infested plants were able to signal the other plants, connected through mycorrhizae, of an imminent attack—giving them a “heads up” and affording them time to mount their own chemical defenses in order to prevent infestation. Miles of Mycorrhizae in One Thimbleful of Soil Making Farming More Eco-friendly.