Figures - APA Citation Style, 6th edition - Research Guides at George Washington University. When you use a figure in your paper that has been adapted or copied directly from another source, you need to reference the original source. 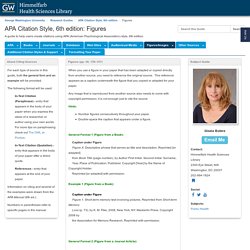 This reference appears as a caption underneath the figure that you copied or adapted for your paper. Any image that is reproduced from another source also needs to come with copyright permission; it is not enough just to cite the source. Hints: Number figures consecutively throughout your paper.Double-space the caption that appears under a figure. General Format 1 (Figure from a Book): Caption under Figure Figure X. From Book Title (page number), by Author First Initial. Year, Place of Publication: Publisher. Reprinted [or adapted] with permission. Example 1 (Figure from a Book): Figure 1. Loss (p. 73), by K. The Association for Memory Research. General Format 2 (Figure from a Journal Article): from “Title of Article,” by Author First Initial. Volume(issue), page number.

Example 2 (Figure from a Journal Article) Figure 1. The choice task (b). Task," by S. 20090212013008 560. Itled. Library catalog. Another view of the SML card catalog The card catalog was a familiar sight to library users for generations, but it has been effectively replaced by the online public access catalog (OPAC). 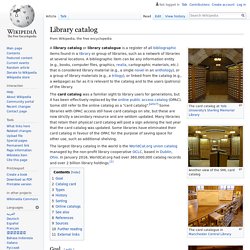 Some still refer to the online catalog as a "card catalog". [who?] Some libraries with OPAC access still have card catalogs on site, but these are now strictly a secondary resource and are seldom updated. Many libraries that retain their physical card catalog will post a sign advising the last year that the card catalog was updated. Joint Steering Committee for Development of RDA: A Brief History of AACR. Early English Language Cataloguing Codes British Museum Rules The first major English-language cataloguing code was that developed by Sir Anthony Panizzi for the British Museum catalogue. 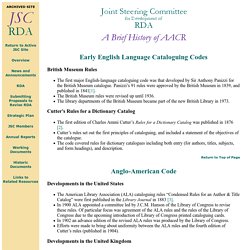 Panizzi’s 91 rules were approved by the British Museum in 1839, and published in 1841[1]. The British Museum rules were revised up until 1936. Criticism of Cataloging Code Reform, as Seen in the Pages of Library Resources and Technical Services (1957–66) The library historian Wiegand has said, “We are all prisoners of our own discourses,” meaning that the stories we tell about ourselves influence our views of our place in culture and society.1 For librarians in the United States, that means that they often consider their institutions “cornerstones of the communities they serve” because “free access to the books, ideas, resources, and information in America’s libraries is imperative for education, employment, enjoyment, and self-government.”2 What librarians tell themselves and each other about their professional values plays an important part in how they perceive their own history. 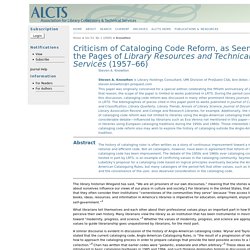 Many librarians view the library as an institution that has been instrumental in moving society toward “modernity, progress, and science.”3 Whether the values of modernity, progress, and science are appropriate values to guide librarianship goes unquestioned by librarians, for the most part. Tribute to Seymour Lubetzky Held During Midwinter in San Diego. The traditional Saturday evening ALCTS membership reception, held January 10, 2004 at the Manchester Grand Hyatt Hotel, was re-christened ALCTS Presidential Assembly and Reception and honored the memory of Seymour Lubetzky, who died at the age of 104 in April 2003. 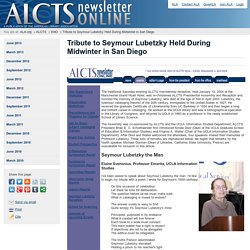 Lubetzky, the foremost cataloging theorist of the 20th century, immigrated to the United States in 1927. He received the graduate Certificate of Librarianship from UC Berkeley in 1934 and then began a long and brilliant career in cataloging. He worked at the UCLA library and was a bibliographical specialist in the Library of Congress, and returned to UCLA in 1960 as a professor in the newly established School of Library Science. The Assembly was co-sponsored by ALCTS and the UCLA Information Studies Department. ALCTS President Brian E. FRBR and Fundamental Cataloguing Rules. Do not use this old essay. 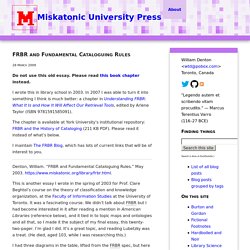 Please read this book chapter instead. I wrote this in library school in 2003. In 2007 I was able to turn it into something I think is much better: a chapter in Understanding FRBR: What It Is and How It Will Affect Our Retrieval Tools, edited by Arlene Taylor (ISBN 9781591585091). The chapter is available at York University’s institutional repository: FRBR and the History of Cataloging (211 KB PDF). Please read it instead of what’s below.

I maintain The FRBR Blog, which has lots of current links that will be of interest to you. Seymour Lubetzky, 104, Librarian, Dies. Seymour Lubetzky, who helped librarians channel the rising tide of information with his ingenious transformation of cataloging, died last Saturday in Los Angeles. 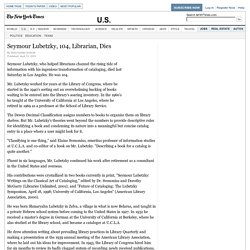 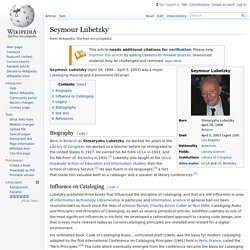 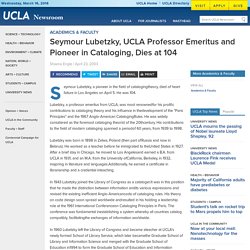 He was 104. Lubetzky, a professor emeritus from UCLA, was most renownedfor his prolific contributions to cataloging theory and his influence in thedevelopment of the "Paris Principles" and the 1967 Anglo-American CatalogingRules.