Wait But Why. The Histomap. What are some mind-expanding books to read? The Greatest Literature of All Time. What's the greatest literature ever? 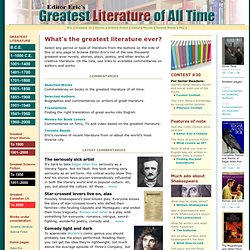 Select any period or type of literature from the buttons on the side of this or any page to browse Editor Eric's list of the one thousand greatest-ever novels, stories, plays, poetry, and other works of creative literature. On the lists, see links to available commentaries on authors and works. Selected Works Commentaries on books in the greatest literature of all time. Selected Authors Biographies and commentaries on writers of great literature. Translations Finding the right translation of great works into English. Movies for Book Lovers Commentaries on films, TV and video based on the greatest literature. Toronto Reads Eric's reviews of recent literature from or about the world's most diverse city. The seriously sick artist It's hard to take Edgar Allan Poe seriously as a literary figure. 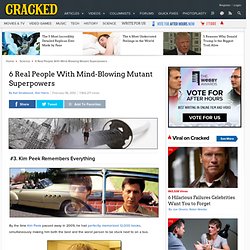 Kim Peek Remembers Everything By the time Kim Peek passed away in 2009, he had perfectly memorized 12,000 books, simultaneously making him both the best and the worst person to be stuck next to on a bus. Dmadeo"Anyone up for a stirring monotone recitation of Finnegan's Wake? " One reason he was able to put away so many books is that he could read them two pages at once, one page with each eye, because apparently that's something you can do. It is claimed Peek had an eidetic memory, or photographic memory, something that people aren't even sure actually exists. Peek's story was also the inspiration for the film Rain Man. In your face, Hoffman. So What's Going on Here? Many assumed Peek was, like the guy in the last entry, an autistic savant, because Americans think "autism" means "Xavier's School for Gifted Youngsters. " Throughout it all, Peek only wanted to share his gift with the world. Richard Green, Salinas Valley Memorial Healthcare SystemAnd then stole his goddamn car. #2. 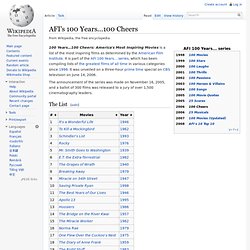 It is part of the AFI 100 Years… series, which has been compiling lists of the greatest films of all time in various categories since 1998. It was unveiled on a three-hour prime time special on CBS television on June 14, 2006. The announcement of the series was made on November 16, 2005, and a ballot of 300 films was released to a jury of over 1,500 cinematography leaders. The List[edit] Criteria[edit] Feature-length film: Narrative format, typically over 60 minutes long. American film: English language film with significant creative and/or production elements from the United States. Cheers: Movies that inspire with characters of vision and conviction who face adversity and often make a personal sacrifice for the greater good. Legacy: Films whose "cheers" continue to echo across a century of American cinema. 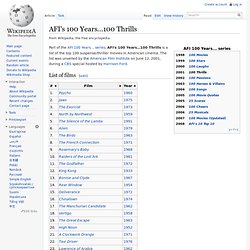 The list was unveiled by the American Film Institute on June 12, 2001, during a CBS special hosted by Harrison Ford. List of films[edit] Criteria[edit] Feature-Length Fiction Film: The film must be in narrative format, typically more than 60 minutes long.American Film: The film must be in the English language with significant creative and/or financial production elements from the United States.Thrills: Regardless of genre, the total adrenaline-inducing impact of a film’s artistry and craft must create an experience that engages our bodies as well as our minds.Legacy: Films whose "thrills" have enlivened and enriched America’s film heritage while continuing to inspire contemporary artists and audiences. External links[edit] Why I Read (+ a Dozen Book Recommendations) By Leo Babauta In the quiet morning hours, or as I fade off to sleep at night, I cuddle up with a good novel. 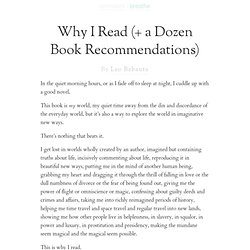 This book is my world, my quiet time away from the din and discordance of the everyday world, but it’s also a way to explore the world in imaginative new ways. There’s nothing that beats it. This is why I read. Reading has been shown to make us more empathetic people, but it also helps us learn to sit still for longer without distractions, and gives us a break from the pull of smartphones and the online world. Reading is one of my favorite habits, and though once in awhile I slip away from it, I always come back.

Leo’s Book Recommendations If you’d like to read more fiction, here’s a list of some of my favorite books to get you started (in no means comprehensive): Ideas - Globe. Sweatshop. 3rd World Farmer: A simulation to make you think.