Literary Tourism: Sherlock Holmes. For the average bibliophile, popping over to 221B Baker Street while in London or strolling past the statue of Sherlock Holmes in Arthur Conan Doyle’s hometown of Edinburgh will probably satisfy your Sherlock-related travel cravings. 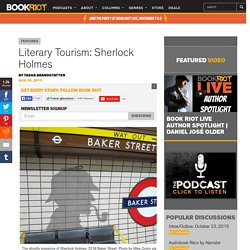 But if you’re a Sherlockian, that’s not even the tip of the iceberg. You don’t want to just say hey to the character of Sherlock, you want to walk with him along the mist-shrouded streets of Victorian London. And, despite the damage the Blitz rendered to the city he called home, you definitely can. According to one estimate, there’s approximately 200 Sherlock sites in London alone, and there are even more Sherlock Holmes attractions all around the world. 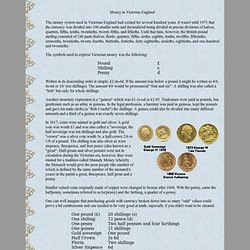 It wasn't until 1971 that the currency was divided into 100 smaller units and decimalized being divided in precise divisions of halves, quarters, fifths, tenths, twentieths, twenty-fifths, and fiftieths. Until that time, however, the British pound sterling consisted of 240 parts (halves, thirds, quarters, fifths, sixths, eighths, tenths, twelfths, fifteenths, sixteenths, twentieths, twenty-fourths, thirtieths, fortieths, forty-eightieths, sixtieths, eightieths, and one-hundred and twentieths. The symbols used to express Victorian money was the following: Written in its descending order is simple: £2-4s-6d.

Another monetary expression is a "guinea" which was £1-1s-od or £1.05. In 1817, coins were minted in gold and silver. Smaller valued coins originally made of copper were changed to bronze after 1860. Sherlock Holmes: Baker Street Dozen - Table of Contents. Beacon Society: I'm a Sherlockian. I’m a busy person, but I enjoy reading about Sherlock Holmes. 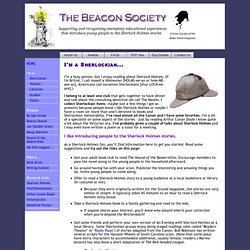 (If I'm British, I call myself a Holmesian [HOLMS-ee-an or hole-ME-see-an], Americans call ourselves Sherlockians [shur-LOCK-ee-ans].) I belong to at least one club that gets together to have dinner and talk about the consulting detective we call The Master. I collect Sherlockian items: maybe just a few things I got as presents because people know I like Sherlock Holmes or maybe I have a room (or more than one!) Devoted to books and Sherlockian memorabilia. I’ve read almost all the Canon and I have some favorites. I like introducing people to the Sherlock Holmes stories. As a Sherlock Holmes fan, you’ll find information here to get you started. No Place Like Holmes - News. The Baker Street Babes. Doyleockian. The Consulting Detective. Sherlock Holmes Fan? Find Loads of Interesting Holmes Info Here!

My Particular Friend. I Hear of Sherlock Everywhere. Sherlock Holmes Encyclopedia. Unofficial Homepage. Storyline Formula and Typology of the Sherlock Holmes Stories by Herbert Holeman and Strand Magazine Publishing History by Author of Switcheroo. Sherlock Holmes' Resume. REALLY Cool Facts. The Diogenes Club: Required Readings. Sherlock Peoria Main. The View from Sherlock Peoria By Brad Keefauver A Blog From The Outskirts of Sherlockland If you want the guarded words of the old school, old world Holmes fans, it's not hard to find the classic journals. 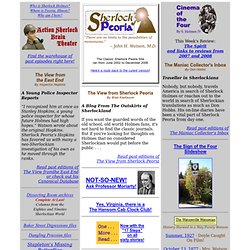 But if you're looking for thoughts on Holmes that no considered Sherlockian would put before the public . . . Read past editions of The View from Sherlock Peoria Yes, Virginia, there is a The Hansom Cab Clock Club! Here's the whole scoop: Hobbs Account One - - Hobbs Account Two Keefauver Account One - - Keefauver Account Two "Comfortable Chairs and the Latest Periodicals" Glimpses of Sherlockian publications of the past . . . Be sure to visit our Periodicals Archive The Chronology Corner Eccentric studies of the dating Dr. Read more now . . . Our Last Issue! The Dark Lantern League Electro-graphic Monthly This Week's Review: The Spirit and links to reviews from 2007 and 2008 The Maniac Collector's Inbox By Don Hobbs Traveller in Sherlockiana. Stanford Sherlock. Sherlockian. Sherlock Crime Scene Pictures.

I am enthusiastic about CRIME SCENE SKETCHES: about its concept of expanding the reader's knowledge of The Watsonian Canon, about its filling a need in the understanding of Holmes and his methods and results that we all want, and about the fact that this book is in the grand tradition of strict, careful, basic explication of The Sixty stories. 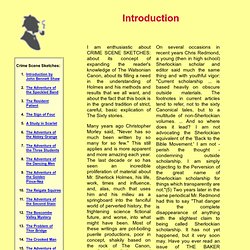 Many years ago Christopher Morley said, "Never has so much been written by so many for so few. " This still applies and is more apparent and more amazing each year. The last decade or so has seen an incredible proliferation of material about Mr. Sherlock Holmes, his life, work, times and influence, and, alas, much that uses him and his milieu as a springboard into the fanciful world of perverted history, the frightening science fictional future, and worse, into what might have been.

I should mention that I have been reading, expounding on and collecting Holmesiana for over forty years. It is still as Edgar W. John Bennett Shaw, B.S.I. Sherlock Holmes Quotes. Sherlockian Atlas: GLOR Index. Sherlock Holmes dates and terms. Cool New Sherlock Comprehensive site.