Inspired by the tragic and senseless death of Megan Kanka, MegansLaw.com was created to educate parents about the potential threats sexual predators and registered sex offenders pose to our children. MegansLaw.com is not associated with any government agency or department.

Sexual Predator Statistics Everyone Should Know. Sexual predators are one of the uglier faces of humanity. 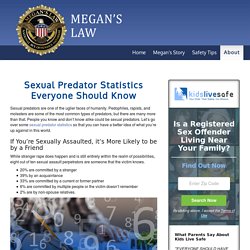 Pedophiles, rapists, and molesters are some of the most common types of predators, but there are many more than that. People you know and don’t know alike could be sexual predators. Let’s go over some sexual predator statistics so that you can have a better idea of what you’re up against in this world. If You’re Sexually Assaulted, it’s More Likely to be by a Friend While stranger rape does happen and is still entirely within the realm of possibilities, eight out of ten sexual assault perpetrators are someone that the victim knows. 20% are committed by a stranger 39% by an acquaintance 33% are committed by a current or former partner 6% are committed by multiple people or the victim doesn’t remember 2% are by non-spouse relatives.

A Predator is Most Likely to be White and Over 30 Years Old Half of all predators are over 30, and about 57% of all sexual predators are white. What is the Definition of Child Abduction? According to a reliable source, the child abduction definition is; “When a child is abducted or stolen it is the unauthorized seizure of a minor (a child under the age of legal adulthood) from the custody of the child's parents or legal guardians.” 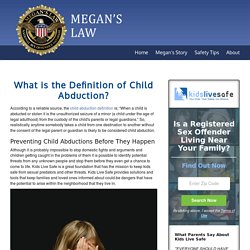 So, realistically anytime somebody takes a child from one destination to another without the consent of the legal parent or guardian is likely to be considered child abduction. Preventing Child Abductions Before They Happen Although it is probably impossible to stop domestic fights and arguments and children getting caught in the problems of them it is possible to identify potential threats from any unknown people and stop them before they even get a chance to come to life. Kids Live Safe is a great foundation that has the mission to keep kids safe from sexual predators and other threats. Some Chilling Child Abduction Facts Quickly Discover Threats In Your Neighborhood Finding sexual predators in your area is much easier than you might think. Ugly Facts about Sexual Predators. Sexual predator facts are ugly.

There is nothing pretty about them. Over the years things seem to have gotten worse because of the easy means of communication via social media. As disgusting as it is, the facts are that they exist and it doesn’t look like they will ever go away. How to Find a Sex Offender By Name. If you would like to find a sex offender by name, we have a few tips for you.

Finding sex offender information is easy to do these days. Thanks to modern technology and the laws that require sex offenders to register their offenses in the state, every concerned citizen the nation can get the truth about people, even when they don’t want them to. Not only can you search for sex offenders by name, but you can also see if there are any sex offenders that live near you or your family. Sex Offender Registry Search US. Inspired by the tragic and senseless death of Megan Kanka, MegansLaw.com was created to educate parents about the potential threats sexual predators and registered sex offenders pose to our children. 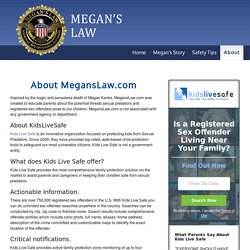 MegansLaw.com is not associated with any government agency or department. About KidsLiveSafe Kids Live Safe is an innovative organization focused on protecting kids from Sexual Predators. Since 2009, they have provided top-rated, web-based child protection tools to safeguard our most vulnerable citizens. Kids Live Safe is not a government entity. 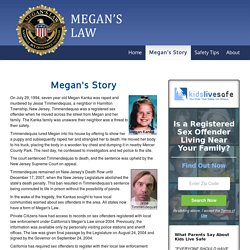 Timmendequas was a registered sex offender when he moved across the street from Megan and her family. The Kanka family was unaware their neighbor was a threat to their safety. Timmendequas lured Megan into his house by offering to show her a puppy and subsequently raped her and strangled her to death. He moved her body to his truck, placing the body in a wooden toy chest and dumping it in nearby Mercer County Park. The next day, he confessed to investigators and led police to the site. The court sentenced Timmendequas to death, and the sentence was upheld by the New Jersey Supreme Court on appeal. Timmendequas remained on New Jersey's Death Row until December 17, 2007, when the New Jersey Legislature abolished the state's death penalty.

In the wake of the tragedy, the Kankas sought to have local communities warned about sex offenders in the area. MegansLaw.com: Find out about Megans Law and Protect Children from Sexual Offenders.