Subscribe to read. Luxury industry in Britain is worth up to £54bn. The British luxury market is forecast to be worth up to £54bn in the next four years according to a new report into the value of the sector. 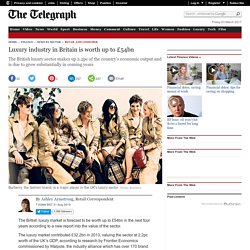 The luxury market contributed £32.2bn in 2013, valuing the sector at 2.2pc worth of the UK’s GDP, according to research by Frontier Economics commissioned by Walpole, the industry alliance which has over 170 brand members including Burberry, Claridges and Harrods. The analysis has put a much higher value on Britain’s luxury industry as previous estimates have valued it at around £8bn. How Burberry is Operationalising 'See Now, Buy Now'. LONDON, United Kingdom — Burberry will unveil its first ever “see now, buy now” show at London Fashion Week today, heralding a new era for the industry in which fans can get their hands on "seasonless" items immediately after they are presented on the runway. 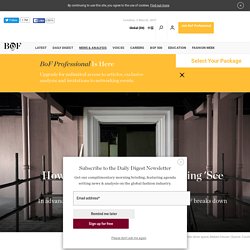 But the new approach has significant implications for production and supply chains, which were out of sync with communications and marketing departments, and all eyes remain on the brand to see how it has executed the changes needed to adapt towards a fashion immediacy model. When the company announced its new consumer-facing concept in February, it was held up as a solution to long-standing problems with the traditional fashion calendar. Fashion shows had long been strictly industry events for press and buyers to preview collections.

Burberry admits its customer loyalty is ‘lagging’ and marketing needs ‘rebalancing’ - Marketing Week. Pre-tax profits fell 10% to £415.6m for the year to 31 March, while revenues dropped 1% on an underlying basis to £2.5bn. 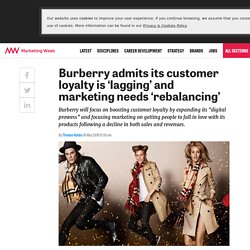 The iconic luxury brand primarily blamed the decline on Asia, citing falling consumption levels, a slowdown in Chinese tourists visiting European stores and weaker demand in Hong Kong. And Burberry expects growth in the luxury sector to continue to slow, with its CEO Christopher Bailey stating that the luxury sector will grow sales by around 2% this year, down from the 7% growth it has experienced over the last five years.

Read more: Luxury brands lose their ‘cool’ status as digital challengers climb the ranks Speaking during a presentation to analysts this morning (18 May), Bailey said changes to marketing would play a big role as Burberry looks to return to growth. He explained: “There will be a big effort to rebalance our marketing activity to tell the stories of our products more powerfully. 10 Trends That Will Define the Fashion Agenda in 2017. LONDON, United Kingdom — After a slowdown in 2016 marked by volatility and uncertainty, our analysis suggests a slight recovery in 2017, to a point where the industry may see 2.5-3.5 percent growth next year. 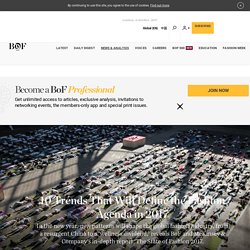 This slight recovery stems from a range of sources. First, macroeconomic indicators, including global GDP growth forecasts, are projected at 3.4 percent compared with 3.1 for 2016; however, at the time of printing, these had not been adjusted to reflect the ongoing impact of political shifts in the United States and the United Kingdom. Second, the investment community expects improvements across the entire fashion industry, particularly driven by the behemoths within these segments, which are reorganising and divesting non-performing, non-core brands. This is confirmed by the key executives in the BoF-McKinsey Global Fashion Survey, who also expect increasing growth across categories and sentiments: 40 percent of respondents expect conditions for the industry to improve in 2017.

The Rise of a Digital Marketing Icon: Burberry. Inside Burberry's restructuring plan. Burberry, in the midst of a massive restructuring, has yet to reap financial benefits from its efforts to right the ship. 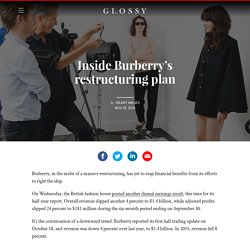 On Wednesday, the British fashion house posted another dismal earnings result, this time for its half-year report. Overall revenue slipped another 4 percent to $1.4 billion, while adjusted profits slipped 24 percent to $181 million during the six-month period ending on September 30. It’s the continuation of a downward trend: Burberry reported its first half trading update on October 18, and revenue was down 4 percent over last year, to $1.4 billion. Subscribe to read. BURBERRY ANNOUNCES BRAND RESTRUCTURING AND NEW PRODUCTION FACILITY - MR Magazine. Since 1990, retailers, designers, menswear execs and fashion insiders have turned to MR Magazine for accurate information, insightful analysis, innovative ideas and trend spotting, as well an inside look at the people who drive the menswear business. 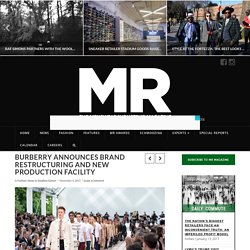 Published six times a year, MR has become the primary source on everything from denim and sportswear to suits and furnishings. MR-Mag.com (formerly MRketplace.com), which launched in 2006, is the industry’s hub for the latest breaking menswear news and fashion trends. MR and MR-Mag.com have offices in Manhattan’s Fashion District and in Norwalk, Conn. MEET THE TEAM Click here to learn about the talented MR Magazine and MR-Mag.com team. For general inquiries please email: info@mr-mag.com For more information about our website, MR Magazine, or Business Journals, Inc. please visit our contact page. Glossy: Fashion, Luxury, Technology.