Why You Need Emotional Intelligence to Succeed. We’re All Terrible at Understanding Each Other. How To Win An Argument Every Time. Harvard Biz Review sur Twitter : "Why Certain Managers Thrive in Tough New Jo... A well-designed environment motivates staff and can help your business thrive... An increasing number of industries and organisations are beginning to explore the way office space affects business culture. 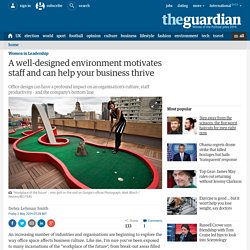 Amazon Jobs: AMZN Hiring for AWS Cloud in Cambridge & Boston. Starbucks Guarantees Jobs And College To 10,000 Unemployed Youths As Next #Ra... Netflix Plans To Enter Chinese Market Independently. In a move that will have China-technology watchers shaking their heads in disbelief, American video website Netflix bravely plans to enter the Chinese market independently without cooperating with local companies. 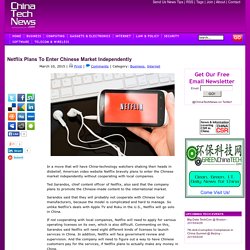 Ted Sarandos, chief content officer of Netflix, also said that the company plans to promote the Chinese-made content to the international market. Sarandos said that they will probably not cooperate with Chinese local manufacturers, because the model is complicated and hard to manage. So unlike Netflix's deals with Apple TV and Roku in the U.S., Netflix will go solo in China. Netflix speeds soar on Comcast following controversial deal. The past few months have been very active for Netflix, as it's faced new challenges with getting its video streams into homes. 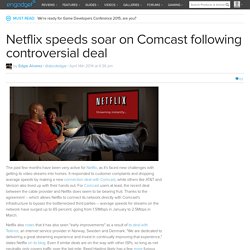 It responded to customer complaints and dropping average speeds by making a new connection deal with Comcast, while others like AT&T and Verizon also lined up with their hands out. For Comcast users at least, the recent deal between the cable provider and Netflix does seem to be bearing fruit. Thanks to the agreement -- which allows Netflix to connect its network directly with Comcast's infrastructure to bypass the bottlenecked third parties -- average speeds for streams on the network have surged up to 65 percent, going from 1.51Mbps in January to 2.5Mbps in March. Netflix also notes that it has also seen "early improvements" as a result of its deal with Telenor, an internet service provider in Norway, Sweden and Denmark. Facebook Through The Lens Of Porter's Five Forces. The tyranny of Netflix: you must watch this movie. Now! Netflix and video-on-demand and Hulu have created immense new pressures on hardcore movie lovers. 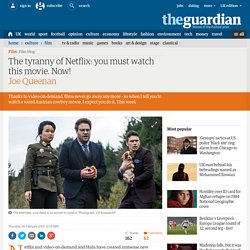 Google Needs To Search For New Brand Values. Google is looking to reposition itself. 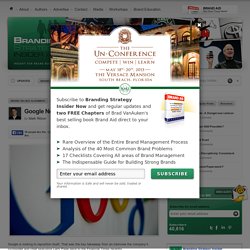 That was the key takeaway from an interview the company’s co-founder and chief executive Larry Page gave to the Financial Times recently. IDEO’s Culture of Helping. Artwork: Freegums, Celestial Plane, 2010, fully tileable ink drawing, 24″ x 36″ Few things leaders can do are more important than encouraging helping behavior within their organizations. 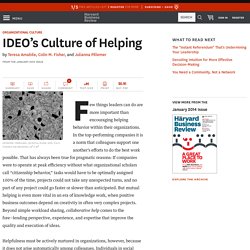 In the top-performing companies it is a norm that colleagues support one another’s efforts to do the best work possible. That has always been true for pragmatic reasons: If companies were to operate at peak efficiency without what organizational scholars call “citizenship behavior,” tasks would have to be optimally assigned 100% of the time, projects could not take any unexpected turns, and no part of any project could go faster or slower than anticipated.

But mutual helping is even more vital in an era of knowledge work, when positive business outcomes depend on creativity in often very complex projects. Beyond simple workload sharing, collaborative help comes to the fore—lending perspective, experience, and expertise that improve the quality and execution of ideas. Leadership Conviction. Altered States: Why to Change Your Organizational Culture and How  Peter Senge, called the "Strategist of the Century" by the Journal of Business Strategy, popularized the concept of the learning organization nearly a decade ago. 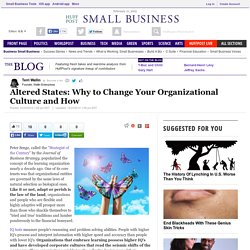 One of its core tenets was that organizational entities are governed by the same laws of natural selection as biological ones. Like it or not, adapt or perish is the law of the land; organizations and people who are flexible and highly adaptive will prosper more than those who shackle themselves to "tried and true' traditions and lumber ponderously to the financial boneyard. IQ tests measure people's reasoning and problem solving abilities. Behavior Theory Can Predict Driving Patterns. By Rick Nauert PhD Senior News Editor Reviewed by John M. 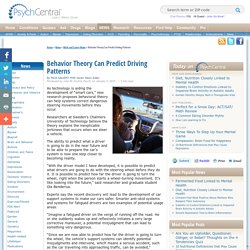 Grohol, Psy.D. on January 5, 2015 ~ 3 min read As technology is aiding the development of “smart cars,” new research proposes behavioral theory can help systems correct dangerous steering movements before they occur. Researchers at Sweden’s Chalmers University of Technology believe the theory explains the inexplicable jerkiness that occurs when we steer a vehicle. From Science Fiction to Reality: The Evolution of Artificial Intelligence. Getty Images What was once just a figment of the imagination of some our most famous science fiction writers, artificial intelligence (AI) is taking root in our everyday lives. 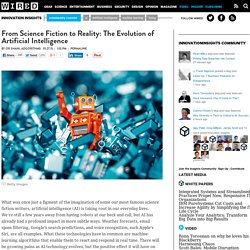 We’re still a few years away from having robots at our beck and call, but AI has already had a profound impact in more subtle ways. Weather forecasts, email spam filtering, Google’s search predictions, and voice recognition, such Apple’s Siri, are all examples. Plan for Success – Why Leadership Skills Matter to Event Organizers. By Emma Nelson I recently attended a leadership course where I learned that the key to being an effective leader is to determine what motivates the people you are trying to lead. 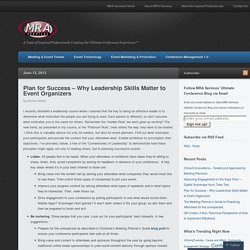