Medical Job is one stop platform to find government and private medical jobs and healthcare jobs in India. 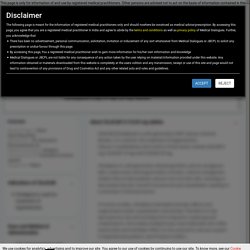 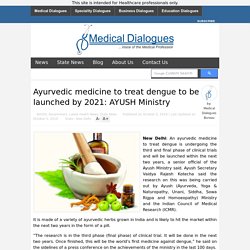 Advertisement ................................ New Delhi: An ayurvedic medicine to treat dengue is undergoing the third and final phase of clinical trials and will be launched within the next two years, a senior official of the Ayush Ministry said. Ayush Secretary Vaidya Rajesh Kotecha said the research on this was being carried out by Ayush (Ayurveda, Yoga & Naturopathy, Unani, Siddha, Sowa Rigpa and Homoeopathy) Ministry and the Indian Council of Medical Research (ICMR). 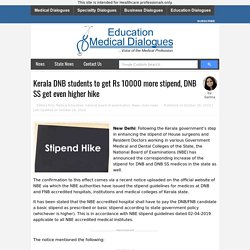 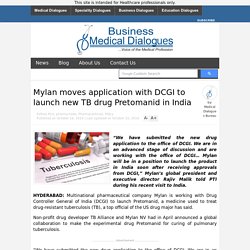 Advertisement ................................ “We have submitted the new drug application to the office of DCGI. We are in an advanced stage of discussion and are working with the office of DCGI… Mylan will be in a position to launch the product in India soon after receiving approvals from DCGI,” Mylan’s global president and executive director Rajiv Malik told PTI during his recent visit to India. HYDERABAD: Multinational pharmaceutical company Mylan is working with Drug Controller General of India (DCGI) to launch Pretomanid, a medicine used to treat drug-resistant tuberculosis (TB), a top official of the US drug major has said. Tranexamic Acid may reduce head injury-related deaths upto 20% finds Lancet study.

Tranexamic Acid may reduce deaths in traumatic brain injury patients by as much as 20%, depending on the severity of the injury, according to a major study published in The Lancet. 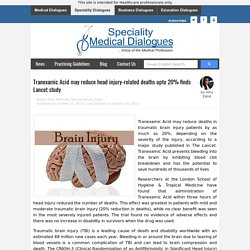 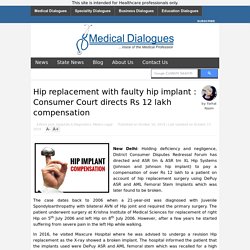 Advertisement ................................ New Delhi: Holding deficiency and negligence, District Consumer Disputes Redressal Forum has directed and ASR tm & ASR tm XL Hip Systems (Johnson and Johnson hip implant) to pay a compensation of over Rs 12 lakh to a patient on account of hip replacement surgery using DePuy ASR and AML Femoral Stem Implants which was later found to be broken. The case dates back to 2006 when a 21-year-old was diagnosed with Juvenile Spondyloarthropathy with bilateral AVN of Hip joint and required the primary surgery. The patient underwent surgery at Krishna Institute of Medical Sciences for replacement of right Hip on 5th July 2006 and left Hip on 8th July 2006. Terazosin- Drug for treating enlarged prostate also beneficial in Parkinson's disease.

Delhi: Terazosin (TZ) — a drug used for the treatment of enlarged prostate — could also be beneficial for Parkinson’s disease (PD), suggests a recent study published in the Journal of Clinical Investigation. 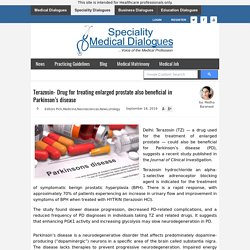 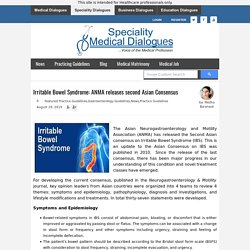 This is an update to the Asian Consensus on IBS was published in 2010. Since the release of the last consensus, there has been major progress in our understanding of this condition and novel treatment classes have emerged. For developing the current consensus, published in the Neurogastroenterology & Motility journal, key opinion leaders from Asian countries were organized into 4 teams to review 4 themes: symptoms and epidemiology, pathophysiology, diagnosis and investigations, and lifestyle modifications and treatments. 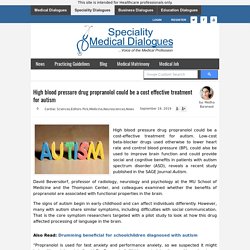 Low-cost beta-blocker drugs used otherwise to lower heart rate and control blood pressure (BP), could also be used to improve brain function and could provide social and cognitive benefits in patients with autism spectrum disorder (ASD), reveals a recent study published in the SAGE Journal Autism. David Beversdorf, professor of radiology, neurology and psychology at the MU School of Medicine and the Thompson Center, and colleagues examined whether the benefits of propranolol are associated with functional properties in the brain.

The signs of autism begin in early childhood and can affect individuals differently. However, many with autism share similar symptoms, including difficulties with social communication. That is the core symptom researchers targeted with a pilot study to look at how this drug affected processing of language in the brain. PGIMER Neurosurgeons develop first ever endoscopic classification of Dandy-Walker Syndrome. New Delhi: Team of neurosurgeons from the department of Neurosurgery at the Post Graduate Institute of Medical Education and Research (PGIMER), Chandigarh, have developed first ever endoscopic classification of pediatric posterior fossa cysts also known as Dandy-Walker Syndrome, DWS, in children younger than 5 years. 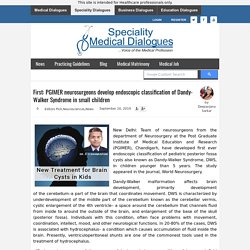 The study appeared in the journal, World Neurosurgery. Dandy-Walker malformation affects brain development, primarily development of the cerebellum–a part of the brain that coordinates movement. DWS is characterized by underdevelopment of the middle part of the cerebellum known as the cerebellar vermis, cystic enlargement of the 4th ventricle– a space around the cerebellum that channels fluid from inside to around the outside of the brain, and enlargement of the base of the skull (posterior fossa). Individuals with this condition, often face problems with movement, coordination, intellect, mood, and other neurological functions. This new classification proposed by Dr. For refractory severe tinnitus- Deep brain stimulation safe and effective treatment option. Charlottesville, VA. Researchers from the University of California San Francisco and Veterans Affairs Health Care System, San Francisco have found deep brain stimulation to be safe and effective in the treatment of refractory severe tinnitus.

Detailed findings of the study have been published today in the Journal of Neurosurgery. Dr Steven W. Occupational exposure to high levels of pesticides may raise the risk of heart disease and stroke. Use of pesticides has increased tremendously over the years in agriculture as well as in industry. The term pesticide covers a wide range of compounds including insecticides, fungicides, herbicides, rodenticides, molluscicides, nematicides, plant growth regulators and others.

BCG vaccine offers protection from Lung Cancer, reports 60-year follow-up of a clinical trial. In a 60 years follow-up clinical trial, scientists have come up with surprising results which shows that childhood bacille Calmette-Guérin vaccination (BCG)– used for immunization against tuberculosis (TB)– may also offer protection from lung cancer. The results were published in the Journal of the American Medical Association (JAMA). In this 60-year follow-up of a clinical trial of the BCG vaccine that included 2963 participants vaccinated at a median age of 8 years, those who received the BCG vaccine had a subsequent lung cancer rate of 18.2 cases per 100 000 person-years. Participants who received the placebo had a lung cancer rate of 45.4 cases per 100 000 person-years. BCG vaccine is the only World Health Organization (WHO) approved vaccine indicated for use in infants and children to provide protection against tuberculosis (TB).

As prostate cancer and many forms of infertility are male sex hormone-related, a possible link between them has been investigated previously. But study weaknesses have so far prevented researchers from drawing any firm conclusions. Inclisiran has sustained LDL-C lowering potential with twice a year dosing: JAMA Study. London, England: Lowering low density lipoprotein cholesterol (LDL-C) is key to a healthy heart and preventing cardiovascular disease. Statins are the mainstay treatment for lowering of the bad cholesterol as supported by all lipid guidelines. Cardiac MRI scan can be read in 4 seconds now with help of Artificial Intelligenec, finds study.

Omega 3, Vitamin D may help fight cancer and provide protection from heart attack: VITAL clinical trial. FDA clears new pain management device for chronic and traumatic pain. Alfa Plus has been manufactured in Israel and has completed three years of research and development, conducted by Dr. Eyal Behrbalk, Head of the Orthopedic Department at The Hillel Yaffe Medical Center.

The study evaluated Alfa Plus technology together with a trigger-point treatment on over 100 patients who suffered from chronic lower back pain. The results were excellent, with more than 90 percent of patients reporting significant relief from pain after treatment. Solio Alfa Plus received Food and Drug Administration clearance in early 2019, and has already sold more than 3000 units,” said Solio Founder, Shahak “Chuck” Cohen. “So, in addition to clinical success, and excellent patient testimonies regarding the relief from different types of pain — especially chronic pain, sports related injuries, pain from traumatic injury, as well as menstrual pain — we are quite confident in Alfa Plus’s effectiveness.” Madhya Pradesh gets new Super-speciality hospital. Medical Education Minister had inspected the facility constructed at an expense of approximately Rs 150 crore and boasting a world-class modular operation theatre, high-level catheterisation laboratory, biplane digital subtraction angiography, and a 30-bed intensive care unit.

47 lakh people got treatment in 1st year under Modicare. Job Alert: ESIC Hospital Delhi releases Vacancies for Faculty posts; APPLY NOW. Delhi – The Employees’ State Insurance Corporation Dental College & Hospital, (ESIC Delhi) has released 15 vacancies for Faculty posts. The Selection will be done based on Interview. Govt reviewing parameters used to measure stunting in children. New Delhi: The government is reviewing parameters used to measure stunted growth in children to see how they can be “Indianised” according to anthropology of Indians, sources said.

Stunting is the impaired growth and development that children experience from poor nutrition, repeated infection, and inadequate psychosocial stimulation. AIIMS publishes Schedule for MSc, MSc Nursing professional exams; Details. Novo Nordisk wins USFDA nod for oral diabetes drug Rybelsus. Novo Nordisk did not disclose what it plans to charge for the new oral treatment, called Rybelsus, but said it would be “competitively priced” with other drugs in the same “GLP-1” class of medicines.

Medical Dialogues is a daily news portal for medical professionals and other people associated with the healthcare sector, or pharma sector in India, to get the latest medical news. Critical care Intensivist. Find all medical jobs and healthcare jobs in India.