Getting Your Website Health In Check for 2015 - MediaVision Blog. While 2014 may have ended either in a flurry of rushed deadlines or a slow, lethargic wind down, it’s a brand new year which means it’s time for a fresh start and an injection of new energy into your website. 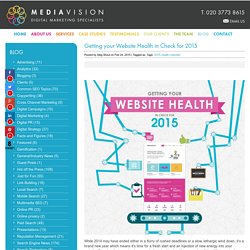 Ensuring that you check your website is looking healthy can make all the difference to the year’s work ahead. There’s no point getting complicated with your website’s health if you’ve skipped the basics. Make sure you have installed the following without fail: Google Analytics This an absolute must for any marketer. Use filters to remove internal traffic.An ecommerce site needs ecommerce tracking – no exceptions! Google Webmaster Tools This tool helps Webmasters monitor and maintain site visibility and indexation and has a number of handy reports for diagnosing issues. SEO for WordPress WordPress plugins such as Yoast by Joost De Valk make the implementation of basic SEO elements easy and Yoast is one of our favourites.

XML Sitemaps Ensure that your XML Sitemap is intact. Indexation. The Little Birdy that Bellows; Marketing Challenges in an Age of Social Media. Social Media Day (yes, it’s a thing) is just around the corner. 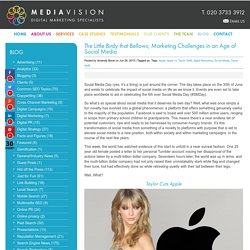 The day takes place on the 30th of June and exists to celebrate the impact of social media on life as we know it. Events are even set to take place worldwide to aid in celebrating the 6th ever Social Media Day (#SMDay). So what’s so special about social media that it deserves its own day? Well, what was once simply a fun novelty has evolved into a global phenomenon; a platform that offers something genuinely useful to the majority of the population. Facebook is said to boast well over 500 million active users, ranging in scope from primary school children to grandparents. When Competition Shifts From the Known to the Unknown. Research highlights the ever-growing digital divide between those that collect, analyze and gain insight — aka power — from data analytics, and those that don’t. 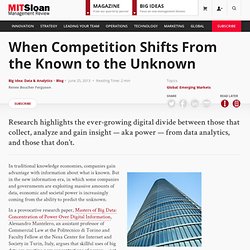 In traditional knowledge economies, companies gain advantage with information about what is known. But in the new information era, in which some companies and governments are exploiting massive amounts of data, economic and societal power is increasingly coming from the ability to predict the unknown. In a provocative research paper, Masters of Big Data: Concentration of Power Over Digital Information, Alessandro Mantelero, an assistant professor of Commercial Law at the Politecnico di Torino and Faculty Fellow at the Nexa Center for Internet and Society in Turin, Italy, argues that skillful uses of big data are creating new concentrations of power — not simply among corporations, but also among nation-states and other groups.

The Importance of Brand Building in the Digital Age. As a digital marketer who approached the industry from the ‘digital’ side of things (SEO to be exact) as opposed to ‘marketing’ in the traditional sense, I can definitely say that my biggest learning curve has been understanding the true concept and value of the brand. 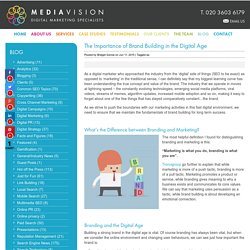 The industry that we operate in moves at lightning speed – the constantly evolving technologies, emerging social media platforms, viral videos, streams of memes, algorithm updates, increased mobile adoption and so on, making it easy to forget about one of the few things that has stayed comparatively constant…the brand. Digital Marketing Resolutions in 2015. As if January wasn’t already the most judgmental month, the dreaded *Fail Friday is upon us and shaking its disapproving head.

Waistlines are refusing to conceal the damage of the holidays and for many of us, resolutions aren’t looking too good either. Digital Marketing Predictions for 2015 by the Experts. Back in 2007, a really disgruntled blogger on PC Mag said that ‘Twitter’s demise will certainly come before we hit 2011’. 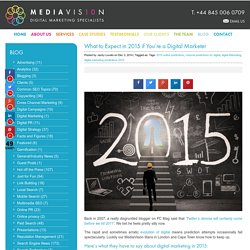 We bet he feels pretty silly now. The rapid and sometimes erratic evolution of digital means prediction attempts occasionally fail spectacularly. How Has Digital Marketing Evolved in 10 Years? After 10 glorious years in the digital marketing industry, there’s really only one thing we can say for certain: TECH-GEEKERY MOVES AT THE SPEED OF LIGHTNING AND YOU DON’T WANT TO LOOK LIKE A MONKEY BEING LEFT BEHIND. 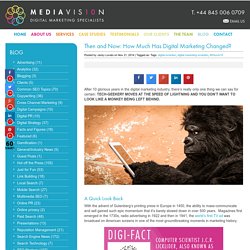 A Quick Look Back With the advent of Gutenberg’s printing press in Europe in 1450, the ability to mass-communicate and sell gained such epic momentum that it’s barely slowed down in over 500 years. Magazines first emerged in the 1730s, radio advertising in 1922 and then in 1941, the world’s first TV ad was broadcast on American screens in one of the most groundbreaking moments in marketing history. [Tweet this] Getting Connected In 1965, a computer in Massachusetts connected with another in California via dial-up and in 1973 the first hand-held mobile phone call was made. 3 Steps to Refresh your Digital Marketing Strategy - MediaVision. As 2014 comes to an end, it is time to reflect on what went wrong, what went right and what changes happened in digital marketing this past year. 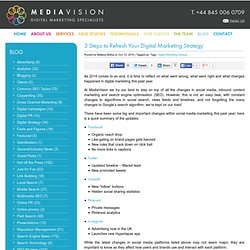 At MediaVision we try our best to stay on top of all the changes in social media, inbound content marketing and search engine optimisation (SEO). However, this is not an easy task, with constant changes to algorithms in social search, news feeds and timelines, and not forgetting the many changes to Google’s search algorithm, we’re kept on our toes! There have been some big and important changes within social media marketing this past year; here is a quick summary of the updates: FacebookOrganic reach dropLike-gating on brand pages gets bannedNew rules that crack down on click baitNo more links in captionsTwitterUpdated timeline – filtered feedNew promoted tweetsLinkedInNew “follow” buttonsHidden social sharing statisticsPinterestPrivate messagesPinterest analyticsInstagramAdvertising now in the UKLaunches new Hyperlapse app 1. 2.

Why Most Startups Don't 'Get' Press. 12 Types of Blog Posts to Drive More Traffic to Your Blog. Need more blog post ideas? 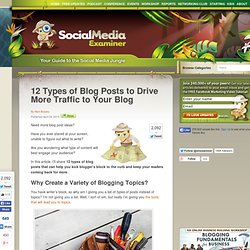 Have you ever stared at your screen, unable to figure out what to write? A Quick (but Thorough) Guide to YouTube Optimization. Though many companies have succeeded in reaching their audiences via social networks such as Facebook and Twitter, only a fraction have explored the option of marketing via YouTube. 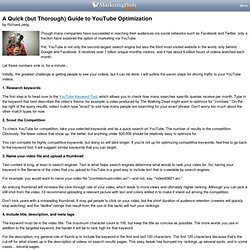 Yet, YouTube is not only the second-largest search engine but also the third most-visited website in the world, only behind Google and Facebook. It receives over 1 billion unique monthly visitors, and it has about 6 billion hours of videos watched each month. Let those numbers sink in, for a minute... Initially, the greatest challenge is getting people to see your videos, but it can be done.

Vodafone to create play from tweets. Raúl Arévalo: gears up for Vodafone's Twitter campaign Next Friday Vodafone will encourage people to suggest lines and directions to the actors using the hashtag #firstteatrotuits. Tweets sent from all over the world will be incorporated into the two-hour play. Arévalo will perform the play alongside the Spainsh actors Juanma Díez and Paula Galimberti at the Capitol Theatre in Madrid at 8pm GMT next Friday (11 July).

Free tickets are available at www.firstteatrotuits.com. 5 Marketing Tips for a Successful Content Strategy. On 25 and 26 June, London’s Olympia Grand hosted the Marketing Week Live 2014 conference. An Agile Approach to Integrated Marketing for Agencies.