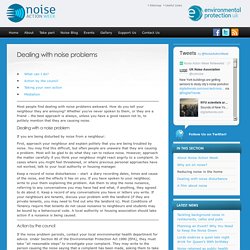 How do you tell your neighbour they are annoying? Whether you’ve never spoken to them, or they are a friend – the best approach is always, unless you have a good reason not to, to politely mention that they are causing noise. If you are being disturbed by noise from a neighbour: First, approach your neighbour and explain politely that you are being troubled by noise. You may find this difficult, but often people are unaware that they are causing a problem.

Keep a record of noise disturbances – start a diary recording dates, times and cause of the noise, and the effects it has on you. If the noise problem persists, contact your local environmental health department for advice. Resolving neighbour disputes. 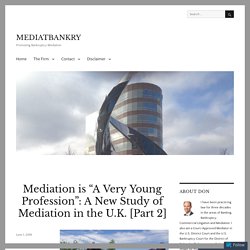 Swanson “Commercial mediation is firmly established in the dispute resolution landscape. Audible. Mediation in Maryland. Anthonygold.co. I am often instructed by tenants who wish claimants who to bring claims against their landlords for injuries suffered at home or in the common parts of a building (ie the parts shared with other tenants such as the entrance hall or garden). Usually, the circumstances leading up to these accidents are either poor or inadequate repairs. Most landlords have a duty under the Landlord and Tenant Act 1985 to keep in good repair the structure and exterior of a dwelling house/flat. This is in addition to any obligations under the Occupiers Liability Act 1957 to ensure the premises are safe for lawful visitors. Whilst the accident circumstances in most cases are fairly obvious, getting admissions of liability from landlords for these types of claims can be quite difficult. 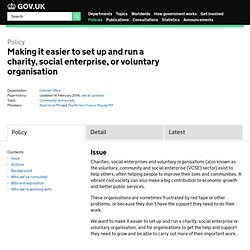 A vibrant civil society can also make a big contribution to economic growth and better public services. These organisations are sometimes frustrated by red tape or other problems, or because they don’t have the support they need to do their work. Part Two: Ten Tips to a Successful Mediation: From the Mediator's Perspective. In part one of my article, I discussed five tips you should follow prior to the mediation conference to best achieve a successful result. 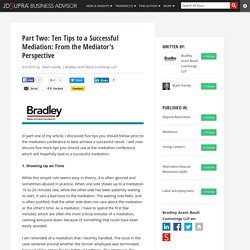 I will now discuss five more tips you should use at the mediation conference which will hopefully lead to a successful mediation. 1. Showing Up on Time While this simple rule seems easy in theory, it is often ignored and sometimes abused in practice. Study: Friendly Neighborhoods Reduce Risk of Heart Attack. Knowing your neighbors may be good for your heart — and not just emotionally — according to a new study by psychologists at the University of Michigan. 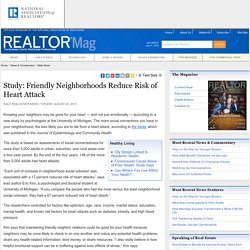 The more social connections you have in your neighborhood, the less likely you are to die from a heart attack, according to the study, which was published in the Journal of Epidemiology and Community Health. Healthy Living The study is based on assessments of social connectedness for more than 5,000 adults in urban, suburban, and rural areas over a four-year period. By the end of the four years, 148 of the more than 5,000 adults had heart attacks. “Each unit of increase in neighborhood social cohesion was associated with a 17 percent reduced risk of heart attacks,” says lead author Eric Kim, a psychologist and doctoral student at University of Michigan. Home. Mediation North Surrey. Comments (0) If you have neighbourly issues Mediation North Surrey can help by mediating between you and your neighbour. 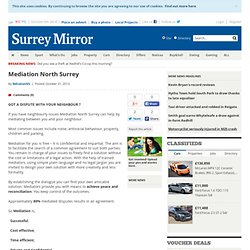 Most common issues include noise, antisocial behaviour, property, children and parking. Mediation for you is free – It is confidential and impartial. The aim is to facilitate the search of a common agreement to suit both parties. Neighbour dispute: Faidi v Elliott Corp [2012] EWCA Civ287 Appeal dismissed, parties critised for not mediating sooner. Neighborhood Mediation versus Code Enforcement. Neighbor To Neighbor Mediation. Médiation. The Australian Dispute Resolution Research Network. I would like to draw your attention to a new UK journal: Mediation Theory and Practice, to be published by the College of Mediators. 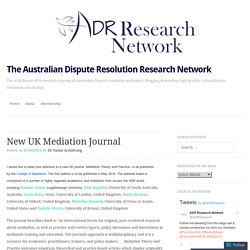 The first edition is to be published in May 2016. The editorial board is comprised of a number of highly regarded academics and mediators from across the ADR world, including Elizabeth Stokoe, Loughborough University, Dale Bagshaw, University of South Australia, Australia, Samia Bano, SOAS, University of London, United Kingdom, Mavis Maclean, University of Oxford, United Kingdom, Madeline Maxwell, University of Texas at Austin, United States and Paulette Morris, University of Brunel, United Kingdom The journal describes itself as “an international forum for original, peer-reviewed research about mediation, as well as practice and events reports, policy discussions and innovations in mediation training and education. CSJ-Press-Release. Building a Mediation Practice in a Small Community. I came into mediation almost accidentally. 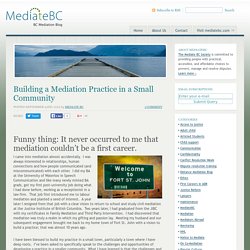 I was always interested in relationships, human connections and how people communicated (and miscommunicated) with each other. I did my BA at the University of Waterloo in Speech Communication and like many newly minted BA grads, got my first post-university job doing what I had done before, working as a receptionist in a law firm. That job first introduced me to labour mediation and planted a seed of interest. A year later I resigned from that job with a clear vision to return to school and study civil mediation at the Justice Institute of British Columbia. A simple breakdown of dispute resolution mechanisms. - Prime Dispute. The traditional method of resolving a dispute, is to go to court. 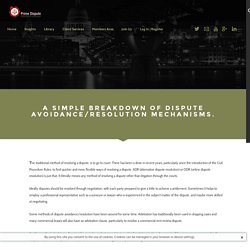 There has been a drive in recent years, particularly since the introduction of the Civil Procedure Rules, to find quicker and more flexible ways of resolving a dispute. ADR (alternative dispute resolution) or ODR (online dispute resolution) is just that. It literally means any method of resolving a dispute other than litigation through the courts. Mediation Overview - Stafford. Mediation is a cheaper alternative to Court proceedings for solving issues relating to divorce, separation, contact, communication, finance and care of children. 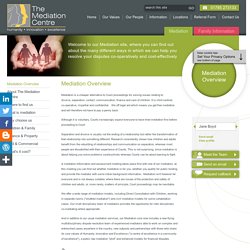 Guy builds a gadget to blast loud music back at neighbors / Boing Boing. YouTuber Matthew Br made a gadget that senses when the rude people in the apartment next to him play loud music and blasts especially annoying music back at them through the wall. The device gives the neighbors a short grace period that stops it from triggering if the neighbors sneeze or drop something heavy, but if the loud music goes on too long, the device kicks into action and punishes them with a high decibel onslaught.

[via] Turkeys attacking cops The above clip from a U.K. television show compiles dashcam footage of turkeys attacking police officers. It continues below: The following video of a terrified reporter being pursued by a turkey is even better. Man has fun pranking email scammers I’m enjoying James Veitch’s weekly video series where he has fun with email scammers. Mediation Agreement - Why it can be a 'red herring' - CAOTICA. This morning I had another talk with the German Chancellor, Herr Hitler, and here is the paper which bears his name upon it as well as mine.

Some of you, perhaps, have already heard what it contains but I would just like to read it to you: ‘ … We regard the agreement signed last night and the Anglo-German Naval Agreement as symbolic of the desire of our two peoples never to go to war with one another again. – Neville Chamberlain 30 September 1938. About Mediation, Conflict Resources/Mediation, Community & Neighborhood Resources, City of Longmont, CO. What is Mediation?

Mediation is an informal voluntary process for parties who have a conflict that they have been unable to resolve. Trained mediators meet with the parties to discuss their concern and the cause of the dispute. They assist the parties in reaching a solution that will work for them and end the dispute. The mediator(s) write down the specifics of the agreement. This agreement is binding and enforceable by those who sign it unless otherwise stated in the agreement. Neighbour dispute: Faidi v Elliott Corp [2012] EWCA Civ287 Appeal dismissed, parties critised for not mediating sooner. Jason Dykstra - Conflict Management Specialist. Mediation: A Litigation Alternative. Mediation4 - Blog. The_role_of_mediation_in_tackling_neighbour_disputes. Defining Mediation: Voluntary Assisted Negotiation.