Vlnky formulář vod povrchových kapitole 1, je Harry Potter + Final Fantasy VII Crossover fanfic. It all started with a ripple on the surface of a black curtain like substance. 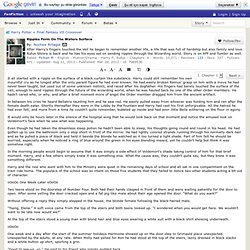 Harry could still remember his own mournful cry as he lunged after the only parent figure he had ever known. He had easily broken Remus' grasp on him with a move he had never been taught, but used out of some unknown instinct, and raced after his dogfather. His fingers had barely touched the surface of the veil, enough to send ripples through the future of the wizarding world, when he was hauled back by one of the other Order members. He hadn't cared who, or why, and after a brief moment more of angst the Order member dragged him from the ancient artifact. In between his cries he heard Bellatrix taunting him and he saw red. It would only be hours later in the silence of the hospital wing that he would look back on that moment and notice the amused look on Voldemort's face when he saw what was happening. oOoOo One Week Later oOoOo Two teens stood on the doorstep of Number Four. Vykoupení padlý anděl kapitole 2, Harry Potter + Final Fantasy VII Crossover fanfic. 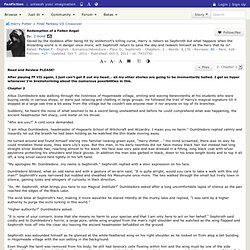 After playing FF VII again, I just can't get it out my head… all my other stories are going to be momentarily halted. I get so hyper whenever I'm brainstorming about the numerous possibilities in this. Chapter 2 Albus Dumbledore was walking through the liveliness of Hogsmeade village, smiling and waving benevolently at his students who were buying candy in various shops, or were just relaxing and chatting in large groups. He followed the trail of Harry's magical signature till it stopped at a large oak tree a bit away from the village but he couldn't see anyone near it nor anyone on top of its branches. Suddenly, he heard the noise of what seemed to be a sword being unsheathed and before he could comprehend what was happening, the ancient headmaster felt sharp, cold metal on his throat. "Who are you? " "I am Albus Dumbledore, headmaster of Hogwarts School of Witchcraft and Wizardry.

"My apologies Mr. "So, Mr. "Higher authority? " A week later… Donum DEAE Kapitola 1: Prolouge, Harry Potter + Final Fantasy VII Crossover fanfic. AN: I got put up to this by one of my readers of Snow day when I reviewed her story. 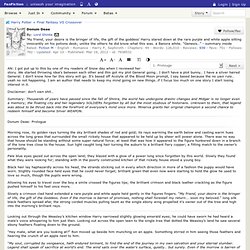 We started throwing idea's between each other and this got my plot General going.. I don't have a plot bunny.. I have a silver haired General. I don't know how far this story will go. It's based off Acolyte of the Blood Moon prompt, I say based because the no yaoi rule.. yeah no not happening. Disclaimer: don't own shit.. Summary: Thousands of years have passed since the fall of Shinra, the world has undergone drastic changes and Midgar is no longer even a memory; the floating city and her legendary SOLDIERs forgotten by all but the most studious of historians. Donum Deae: Prologue Morning rose, its golden rays turning the sky brilliant shades of red and gold; its rays warming the earth below and casting warm hues across the long grass that surrounded the small rickety house that appeared to be held up by sheer will power alone.

"Hey mate, what are you looking at? " Sephiroth Potter a Ohnivý pohár kapitole 1, je Harry Potter + Final Fantasy VII Crossover fanfic. Disclaimer I don't own Final Fantasy, nor am I JKR. 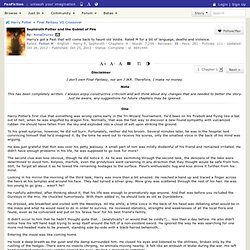 Therefore, I make no money. Note This has been completely written. I always enjoy constructive criticism and will think about any changes that are needed to better the story. One Harry Potter's first clue that something was wrong came early in the Tri-Wizard Tournament. To his great surprise, however, he did not burn. He was just grateful that Ron was over his petty jealousy. The second clue was less obvious, though he did notice it. Looking in his mirror the morning of the third task, Harry was more than a bit amazed. He ruefully admitted, after thinking about it, that his life was enough to prematurely age anyone.

He dressed, ate breakfast and visited with the Weasleys. It didn't occur to him that he hadn't thought quite that... Entering the maze was like coming home. He took a deep breath as the quiet and the damp surrounded him. Sephiroth Potter a Fénixův řád kapitole 1, je Harry Potter + Final Fantasy VII Crossover fanfic. Disclaimer If I owned this, I wouldn't write it for free. 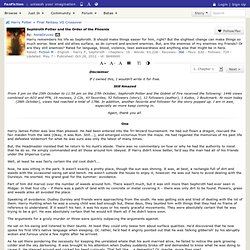 Still Amazed From 5 pm on the 25th October to 11.59 pm on the 27th October, Sephiroth Potter and the Goblet of Fire received the following: 1446 views combined on AO3 and FFN, 19 reviews, 2 C2s, 43 favorites, 52 followers (story), 12 followers (author), 1 Kudos, 1 Bookmark. At noon today (28th October), views had reached a total of 1786. In addition, another favorite and follower for the story popped up. Again, thank you all. One Harry James Potter was less than pleased.