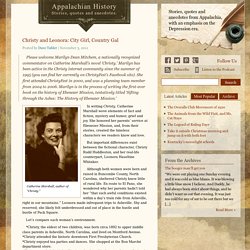 Marilyn has been active in the Christy internet community since the summer of 1995 (you can find her currently on ChristyFest’s Facebook site). She first attended ChristyFest in 2000, and was a planning team member from 2004 to 2006. Marilyn is in the process of writing the first-ever book on the history of Ebenezer Mission, tentatively titled ‘Sifting through the Ashes: The History of Ebenezer Mission.’ Catherine Marshall, author of "Christy.

" In writing Christy, Catherine Marshall wove elements of fact and fiction, mystery and humor, grief and joy. But important differences exist between the fictional character, Christy Rudd Huddleston, and her real-life counterpart, Leonora Haseltine Whitaker. Although both women were born and raised in Buncombe County, North Carolina, sheltered Christy knew little of rural life. Let’s compare each woman’s environment. The proud heritage of the Cherokee Indian. There are very few people in America today who have not heard of the Cherokee Indian Nation. 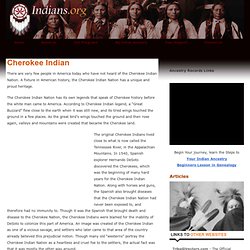 A fixture in American history, the Cherokee Indian Nation has a unique and proud heritage. The Cherokee Indian Nation has its own legends that speak of Cherokee history before the white man came to America. According to Cherokee Indian legend, a “Great Buzzard” flew close to the earth when it was still new, and its tired wings touched the ground in a few places. As the great bird’s wings touched the ground and then rose again, valleys and mountains were created that became the Cherokee land. The original Cherokee Indians lived close to what is now called the Tennessee River, in the Appalachian Mountains. Today the Cherokee Indian Nation still survives as a proud and honorable institution, despite the hardships it was put through by explorers and settlers. Related Article Links American Indian Articles Index | Indigenous Peoples' Literature. Inside Townsend. Posted by insider on Jun 9th, 2011 in Events | 0 comments For a good, healthy dose of Appalachian history, you’ll want to be in Townsend, TN next month for the town’s 15th Annual ChristyFest, a celebration of southern heritage dating back to before the founding of the Great Smoky Mountains National Park. 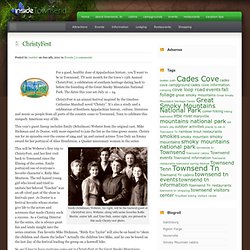 The dates this year are July 21 – 24. ChristyFest is an annual festival inspired by the timeless Catherine Marshall novel “Christy”. It’s also a study and a celebration of Southern Appalachian history, culture, literature and music as people from all parts of the country come to Townsend, Tenn to celebrate this uniquely American way of life. This year’s guest lineup includes Emily (Schulman) Webster from the original cast, Mike Hickman and Jo Doster, with more expected to join the list as the time grows nearer. Emily (Schulman) Webster, far right, will be the featured guest at ChristyFest 2011. Christy's Fan Site. Cherokee Legends (Folklore, Myths, and Traditional Indian Stories) Indigenous languages in the US American Indian people What's new on our site today! 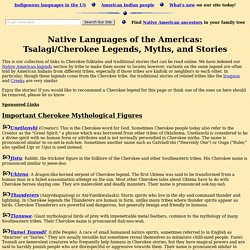 This is our collection of links to Cherokee folktales and traditional stories that can be read online. We have indexed our Native American legends section by tribe to make them easier to locate; however, variants on the same legend are often told by American Indians from different tribes, especially if those tribes are kinfolk or neighbors to each other. In particular, though these legends come from the Cherokee tribe, the traditional stories of related tribes like the Iroquois and Creeks are very similar.

Enjoy the stories! Sponsored Links Important Cherokee Mythological Figures Unetlanvhi (Creator): This is the Cherokee word for God. Jistu: Rabbit, the trickster figure in the folklore of the Cherokee and other Southeastern tribes. Uktena: A dragon-like horned serpent of Cherokee legend. Thunderers (Aniyvdaqualosgi or Ani-Yuntikwalaski): Storm spirits who live in the sky and command thunder and lightning. The world's top Christy websites. Related articles Edit | Discuss Article The film was based on a book (the first in a trilogy) has anyone written anything on these? In the movie K-PAX Kevin Spacey portrays a man claiming to be an alien being named "Prot" from a distant star.

Prot comes under psychiatric care after lending assistance to a woman in distress. He is treated by a Manhattan psychiatrist, Mark Powell (portrayed by Jeff Bridges) who ends up with the intriguing task of "curing" Prot of his delusions. Prot's sometime seemingly naive nature and remarks reveal a lot about humanity and "normal" behavior as we know it. The exceptional performances offered by both Kevin Spacey and Jeff Bridges, not forgetting to mention the wonderful co-players, combined with a unique soundtrack really sets the mood and makes K-PAX a movie one can watch time and time again, each time discovering details that shed new light on the possible interpretations of the events that are encompassed in the movie.