'I Belonged Nowhere': 'Salt Houses' Is A Story Of Displacement, From A Novelist Who Knows. Hala Alyan is the author of three poetry collections. 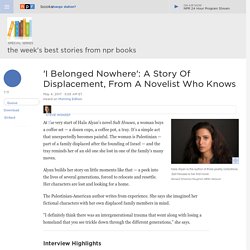 Salt Houses is her first novel. Beowulf Sheehan/Houghton Mifflin Harcourt hide caption toggle caption Beowulf Sheehan/Houghton Mifflin Harcourt Hala Alyan is the author of three poetry collections. At the very start of Hala Alyan's novel Salt Houses, a woman buys a coffee set — a dozen cups, a coffee pot, a tray. Alyan builds her story on little moments like that — a peek into the lives of several generations, forced to relocate and resettle. The Palestinian-American author writes from experience. "I definitely think there was an intergenerational trauma that went along with losing a homeland that you see trickle down through the different generations," she says. Interview Highlights On the importance of objects I've always been really interested in the meaning we imbue [in] objects.

On not having heirlooms On her own family's story On whether her family discusses their past It sort of depends on who you talk to. What should you read this summer? A mega reading list. Illustrations by Maya Sariahmed/TED OK, so it’s not summer everywhere right now. 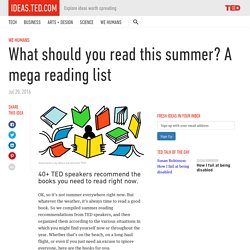 But whatever the weather, it’s always time to read a good book. So we compiled summer reading recommendations from TED speakers, and then organized them according to the various situations in which you might find yourself now or throughout the year. Whether that’s on the beach, on a long-haul flight, or even if you just need an excuse to ignore everyone, here are the books for you. When you’re by the beach What a Fish Knows by Jonathan Balcombe “Our fishy ancestors emerged from the watery depths around 400 million years ago, and this beautiful book connects us back to that time.

The Summer Book by Tove Jansson “The quintessential celebration of summer in Scandinavia — 22 vignettes of a girl and a grandmother on an island. Zen and the Art of Motorcycle Maintenance by Robert M. Lab Girl by Hope Jahren “Scientists rarely write beautifully, but Dr. Einstein’s Brilliant and Unusual Life, in a Graphic Novel. By Maria Popova Albert Einstein (March 14, 1879–April 18, 1955) is celebrated as “the quintessential modern genius” and his groundbreaking discoveries have changed the course of science, but he was also a man of enormous and thus inescapably fallible humanity, whose confusion and conflictedness were inseparable from his genius. 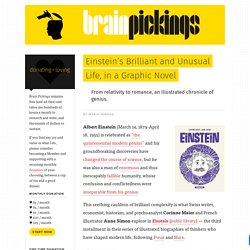 This seething cauldron of brilliant complexity is what Swiss writer, economist, historian, and psychoanalyst Corinne Maier and French illustrator Anne Simon explore in Einstein (public library) — the third installment in their series of illustrated biographies of thinkers who have shaped modern life, following Freud and Marx. From Einstein’s formative childhood experiences to his arrival in America, from his annus mirabilis to his Nobel Prize, from his views on religion to his civil rights activity, the graphic novel unfolds with elegant simplicity of language and intelligent playfulness that would have delighted Einstein, who was known for his irreverent wit. 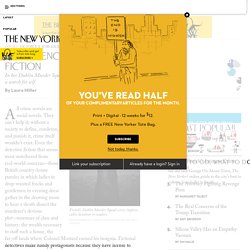 They can’t help it; without a society to define, condemn, and punish it, crime itself wouldn’t exist. Even the detective fiction that seems most untethered from real-world concerns—those British country-house puzzles in which ladies in drop-waisted frocks and gentlemen in evening dress gather in the drawing room to hear a sleuth dissect the murderer’s devious plot—murmurs of class and history: the wealth necessary to staff such a house, the far-off lands where Colonel Mustard earned his insignia.

Fictional detectives make handy protagonists because they have license to explore milieus that are off limits to other characters. This is part of the genre’s allure: the windows it opens onto the street life of Victorian London, the sordid fringes of postwar Hollywood, the doldrums of Sweden’s welfare state, and the sooty haunts of working-class Edinburgh. The 10 Best History Books This Fall. A good grasp of history can help us all understand the issues, conflicts, and discussions of the present moment with that much more clarity. 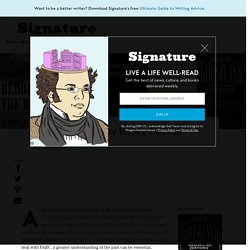 And in a year in which history has led to unexpected events across the globe, from the deeply contentious nature of the current U.S. presidential election to the Brexit vote to Colombia’s voters rejecting a peace deal with FARC, a greater understanding of the past can be essential. Buy The Book Ghostland by Colin Dickey. Log In. “White Teeth,” by Zadie Smith (2000) Photo Zadie Smith’s debut novel can serve as an inspiration to anyone in their 20s, since it was published to worldwide acclaim when Smith was just 24 years old. 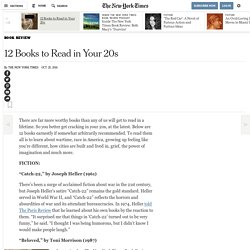 Havana: The City of the Unfinished – in Pictures. 10 Books Our Editors Won't Shut Up About. Though we’re all pretty much self-proclaimed book nerds around these parts, sitting down to read a novel after spending ten or twelve hours editing and writing articles isn’t always our go-to. 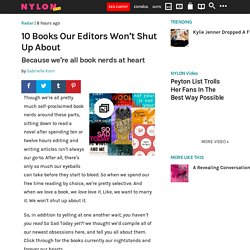 After all, there’s only so much our eyeballs can take before they start to bleed. So when we spend our free time reading by choice, we’re pretty selective.