Will We See The Apple Electric Vehicle On September 9? - Apple Inc. (NASDAQ:AAPL) Summary Much has been written about the Apple EV here on Seeking Alpha and elsewhere. 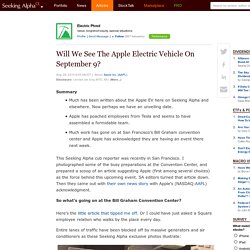 Now perhaps we have an unveiling date. Apple has poached employees from Tesla and seems to have assembled a formidable team. Much work has gone on at San Francisco's Bill Graham convention center and Apple has acknowledged they are having an event there next week. This Seeking Alpha cub reporter was recently in San Francisco. So what's going on at the Bill Graham Convention Center? Here's the little article that tipped me off. Entire lanes of traffic have been blocked off by massive generators and air conditioners as these Seeking Alpha exclusive photos illustrate: Photo credit: Electric Phred via iPad Air, Polk Street side of arena Photo credit: Electric Phred via iPad Air, Larkin Street side of arena Lots of SFPD and rent a cops are posted at every entrance and at the air conditioners in the first picture.

What sort of unveiling needs a 7000 seat venue, weeks of work, and likely millions of dollars? Could you imagine. Got scholarship? Renault will fund electro-mobility classes in France. The Renault Foundation launches the first professional "electric vehicle and electro-mobility" diploma The Renault Foundation is proposing financing for holders of a two-year diploma in further education to complete a training course in future professions in the electric transport and automobile sector. 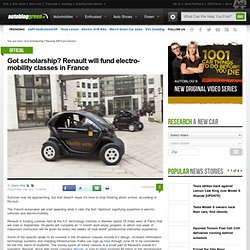 Organized on a work-study basis at the Mantes IUT technology institute west of Paris, the professional diploma in "Electric Vehicle and Electro-mobility" can be obtained at the company of the student's choice. Registration is open through June 16, 2012 on the IUT website at www.iut-mantes.uvsq.fr (on the training course page). The first class of 20 students will start up in September. Trainees will be supported and coached all year long by Foundation members. Post. <div class='noindex'>You may be trying to access this site from a secured browser on the server. Please enable scripts and reload this page. </div> Turn on more accessible mode Skip Ribbon Commands Skip to main content 1 Net Avenu. Aptera closes its doors. A few months ago the electric car startup stopped taking orders and returned customer deposits for its three-wheeled vehicle, and today Aptera closed its business for good. 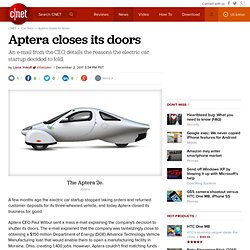 Aptera CEO Paul Wilbur sent a mass e-mail explaining the company's decision to shutter its doors. The e-mail explained that the company was tantalizingly close to obtaining a $150 million Department of Energy (DOE) Advance Technology Vehicle Manufacturing loan that would enable them to open a manufacturing facility in Moraine, Ohio, creating 1,400 jobs. However, Aptera couldn't find matching funds from the private market to execute on those plans. With its curvy body and pointed tail, the Aptera 2e was one of the more visually striking EVs slated to enter the market. Made of a space-age composite that was reportedly so strong you couldn't dent it with a sledgehammer, the vehicle was expected to have an electric range of 206 miles, according to simulated EPA testing. 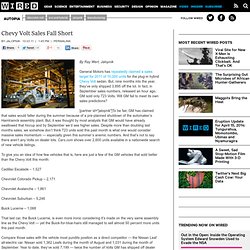 But, nine months into the year, they’ve only shipped 3,895 off the lot. In fact, in September sales numbers, released an hour ago, GM sold only 723 Volts. Swappable Battery News: Better Place Opens Its First European Station, and the Renault Fluence is Cheap in the U.K. - Car and Driver Blog. Better Place, an Israeli company that developed an automated electric-vehicle-battery swap station, expanded beyond the Middle East this week, opening its first station in Europe. 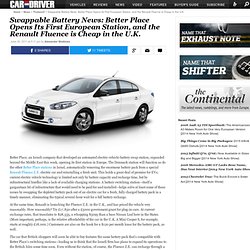 The Denmark station will function as do the other Better Place stations in Israel, automatically removing the enormous battery pack from a special Renault Fluence Z.E. electric car and reinstalling a fresh unit. This holds a great deal of promise for EVs; current electric vehicle technology is limited not only by battery capacity and recharge time, but by infrastructural hurdles like a lack of available charging stations. A battery switching station—itself a gargantuan bit of infrastructure that would need to be paid for and installed—helps solve at least some of these issues by swapping the depleted battery pack out of an electric car for a fresh, fully charged battery pack in a timely manner, eliminating the typical several-hour wait for a full battery recharge.

Last stop before EV. #Cleantech #EV #getridoffossiloil. Smartgrid. Nissan Unveils the All-Electric LEAF to the World (Exclusive Pho. Nissan drew back the curtain today on its ambitious all-electric LEAF. Along with a small parade of international journalists, I've been in Yokohama for the past three days meeting with executives, getting technology briefings, and driving the electric platform. Although we had been given a chance to see the LEAF with our own eyes the day before, we went camera-less and all images were embargoed until this morning when, at Nissan's glimmering new super-green headquarters, the car was revealed.

It was driven onstage by Nissan CEO Carlos Ghosn and other notables, including the former Japanese Prime Minister Junichiro Koizumi.