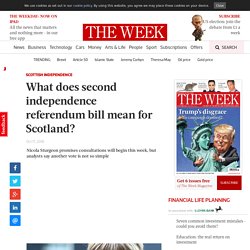 The First Minister made the announcement to cheers at the SNP autumn conference last week and promised the bill would "protect Scotland's ability to choose a better future". However, analysts say another vote on independence will not be quite so straightforward. "Preparing for a second referendum on Scottish independence and actually holding one are not the same thing," says Glenn Campbell, the political correspondent for BBC Scotland. Sturgeon is in "preparation mode" and is "keeping an option open, rather than committing to Indyref2 anytime soon", he adds. Despite announcing the bill, Sturgeon said she might put the pursuit of independence on pause if Westminster handed over greater powers to Scotland and assured the country access to the EU's single market. 13 October 2 September 25 August 26 July.

Scotland Plans New Independence Referendum from U.K. Over Brexit. LONDON — Scotland is drawing up plans for a vote on independence from the rest of Britain over Brexit, deepening the political fallout from the U.K.'s decision to quit the European Union. 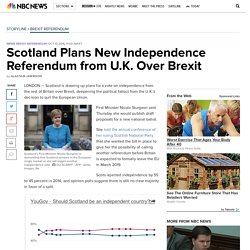 First Minister Nicola Sturgeon said Thursday she would publish draft proposals for a new national ballot. She told the annual conference of her ruling Scottish National Party that she wanted the bill in place to give her the possibility of calling another referendum before Britain is expected to formally leave the EU in March 2019. Scots rejected independence by 55 to 45 percent in 2014, and opinion polls suggest there is still no clear majority in favor of a split. However, Britain's decision in June to quit the EU may shift attitudes in Scotland, which voted to remain in Europe in now faces losing access to the single market because the U.K. as a whole voted to leave.

Scottish referendum: Scotland votes 'No' to independence. Scotland has voted to stay in the United Kingdom after voters decisively rejected independence. 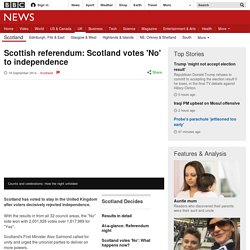 With the results in from all 32 council areas, the "No" side won with 2,001,926 votes over 1,617,989 for "Yes". Scotland's First Minister Alex Salmond called for unity and urged the unionist parties to deliver on more powers. Prime Minister David Cameron said he was delighted the UK would remain together and that commitments on extra powers would be honoured "in full". Mr Cameron said the three main unionist parties at Westminster would now follow through with their pledge of more powers for the Scottish Parliament. He announced that Lord Smith of Kelvin, who led Glasgow's staging of the Commonwealth Games, would oversee the process to take forward the commitments, with new powers over tax, spending and welfare to be agreed by November, and draft legislation published by January. 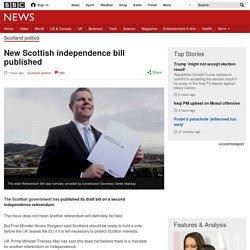 The move does not mean another referendum will definitely be held. But First Minister Nicola Sturgeon said Scotland should be ready to hold a vote before the UK leaves the EU if it is felt necessary to protect Scottish interests. UK Prime Minister Theresa May has said she does not believe there is a mandate for another referendum on independence. If Scottish Ministers decide a referendum is necessary it would then be for the Scottish Parliament - where the SNP and Scottish Greens form a small pro-independence majority - to consider the bill and decide whether a vote should be held. The UK government would then be asked to grant a Section 30 order to make the referendum legally binding. The draft Referendum Bill was formally published by Constitution Secretary Derek Mackay, despite the Scottish Parliament being in recess until next week. Independence or Union: Scotland's Past and Scotland's Present - 01ODU - Old Dominion University.