Sam Altman / Y Combinator, How to Start a Startup. Sam Altman, Startup Advice. In honor of the new YC batch starting tomorrow, here is some of the best startup advice I’ve heard or given (mostly heard): 1. 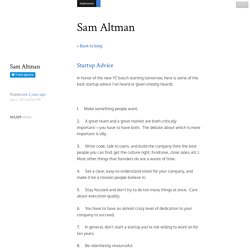 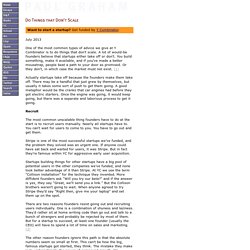 A lot of would-be founders believe that startups either take off or don't. You build something, make it available, and if you've made a better mousetrap, people beat a path to your door as promised. Or they don't, in which case the market must not exist. [1] Actually startups take off because the founders make them take off. Recruit The most common unscalable thing founders have to do at the start is to recruit users manually. Stripe is one of the most successful startups we've funded, and the problem they solved was an urgent one. Startups building things for other startups have a big pool of potential users in the other companies we've funded, and none took better advantage of it than Stripe. James Altucher, Le guide ultime pour démarrer et diriger une entreprise. James Altucher, investisseur, entrepreneur, programmeur et écrivain américain prend la plume. 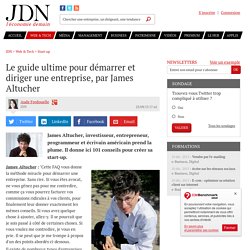 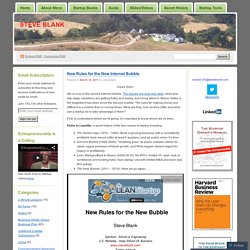 The signals are loud and clear: seed and late stage valuations are getting frothy and wacky, and hiring talent in Silicon Valley is the toughest it has been since the dot.com bubble. The rules for making money are different in a bubble than in normal times. What are they, how do they differ and what can a startup do to take advantage of them? First, to understand where we’re going, it’s important to know where we’ve been. Paths to Liquidity: a quick history of the four waves of startup investing. (If you can’t see the slide presentation above, click here.) If you “saw the movie” or know your startup history, and want to skip ahead click here. 1970 – 1995: The Golden AgeVC’s worked with entrepreneurs to build profitable and scalable businesses, with increasing revenue and consistent profitability – quarter after quarter.

Startups needed millions of dollars of funding just to get their first product out the door to customers. Lessons Learned. Steve Blank (2006), The Four Steps to the Epiphany. Ash Maurya, Running Lean (2ème ed.) Ash Maurya / Lean Canvas, portail. The Family, Startupfood. The Family, le portail. TED, 12 Must Watch TED Talks for Entrepreneurs. We believe passionately in the power of ideas to change attitudes, lives and ultimately, the world. 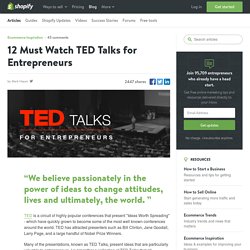 TED is a circuit of highly popular conferences that present "Ideas Worth Spreading" - which have quickly grown to become some of the most well known conferences around the world. TED has attracted presenters such as Bill Clinton, Jane Goodall, Larry Page, and a large handful of Nobel Prize Winners. Many of the presentations, known as TED Talks, present ideas that are particularly valuable to entrepreneurs. I put together a collection of TED Talks that all entrepreneurs, including ecommerce store owners, should find interesting and worthwhile. Since a lot of the presenters below have written books, I have included a link to purchase. Let us know which TED Talk you think should have made the list in the comments. Rory Sutherland: Life Lessons from an Ad Man Entrepreneurs can learn a lot by studying behavioral economics. Simon Sinek: How Great Leaders Inspire Action. Phil Waknell: Secrets of a great Wiki Talk - Wiki Stage ESCP Europe Paris. 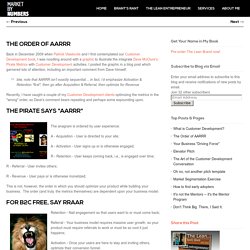 I posted the graphic in a blog post which garnered lots of attention, including an important comment from Dave himself: btw, note that AARRR isn’t exactly sequential… in fact, i’d emphasize Activation & Retention *first*, then go after Acquisition & Referral, then optimize for Revenue Recently, I have caught a couple of my Customer Development clients optimizing the metrics in the "wrong" order, so Dave's comment bears repeating and perhaps some expounding upon.

The Pirate Says "AARRR" The anagram is ordered by user experience: A - Acquisition - User is directed to your site; A - Activation - User signs up or is otherwise engaged; The Definitive Guide to Growth Hacking. What is Growth Hacking? 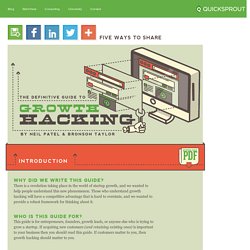