Installation Qt Jambi. Qt Jambi — Deploying Qt Jambi Applications. Java provides a number of different features which makes it easier to deploy applications, such as the Web Start technology, Java Archives (.jar files) and, of course, the virtual machine that enables you to compile your application to bytecode once and run on all architectures. 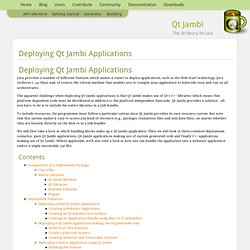 The apparent challenge when deploying Qt Jambi applications is that Qt Jambi makes use of Qt's C++ libraries which means that platform dependent code must be distributed in addition to the platform independent bytecode. Qt Jambi provides a solution - all you have to do is to include the native libraries in a JAR bundle. To include resources, the programmer must follow a particular syntax since Qt Jambi provides its own resource system. But note that this system makes it easy to access any kind of resource (e.g., pixmaps, translation files and xml data files), no matter whether they are located, directly on the disk or in a JAR bundle. Contents Composition of a Deployment Package Class Files Native Libraries Plugins. 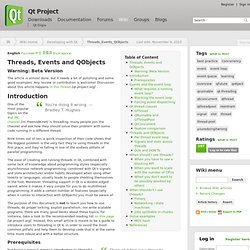 Any review or contribution is welcome! Discussion about this article happens in this thread [qt-project.org] . You’re doing it wrong. — Bradley T. One of the most popular topics on the #qt IRC channel [irc.freenode.net] is threading: many people join the channel and ask how they should solve their problem with some code running in a different thread. Nine times out of ten, a quick inspection of their code shows that the biggest problem is the very fact they’re using threads in the first place, and they’re falling in one of the endless pitfalls of parallel programming. The purpose of this document is not to teach you how to use threads, do proper locking, exploit parallelism, nor write scalable programs; there are many good books about these topics; for instance, take a look to the recommended reading list on this page [qt-project.org].

Prerequisites. QtJambi: QTimer can only be used with threads started with QThread. Qt Jambi — Threading in Qt Jambi. By extension, a class is said to be reentrant if each and every one of its methods can be called simultaneously by multiple threads on different instances of the class. 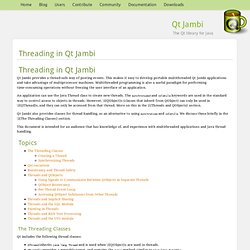 Similarly, the class is said to be thread-safe if the methods can be called by different threads on the same instance. Classes in the documentation will be documented as thread-safe only if they are intended to be used by multiple threads. Note that the terminology in this domain isn't entirely standardized. POSIX uses a somewhat different definition of reentrancy and thread-safety for its C APIs. When dealing with an object-oriented C++ class library such as Qt, the definitions must be adapted. Most Qt Jambi classes are reentrant and not thread-safe, to avoid the overhead of repeatedly locking and unlocking a QMutex.

Threads and QObjects As mentioned previously, when a QObject is to be created in a thread, you need to use the QThread class. QObject Reentrancy. Com/trolltech/examples/ResourceSystem.java in qt-jambi/qtjambi-community:master - Qt by Digia. Java - Setup file for application using QT Jambi. Building_Qt_Jambi_on_Windows_using_MinGW. General The following howto describes the steps neccessary to compile Qt Jambi on Windows using the MinGW development environment. 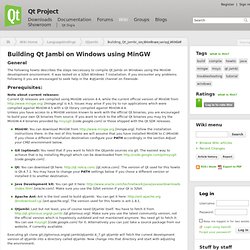 It was tested on a 32bit Windows 7 installation. If you encounter any problems following it you are encouraged to seek help in the #qtjambi channel on freenode. Prerequisites: Note about current releases: Current Qt releases are compiled using MinGW version 4.4, while the current official version of MinGW from [mingw.org] is 4.5. MinGW: You can download MinGW from [mingw.org]. Executing git clone qtjambi will fetch the current development version of qtjambi into a directory called qtjambi. Compile own Qt with MinGW and MSYS 1. 4. exec “make” or “mingw32-make”, which one ever is available 5. Adjust the build properties In the root directory of Qtjambi there are two files named build.properties and buildpath.properties respectively. Adjust your CMD environment: The commands to set up the environment may (depending on your installation paths) look like this: