Malala Youzafzai, a 17 year-old Hero and Nobel Peace Prize Winner. Prologue: The Day my World Changed I come from a country which was created at midnight. When I almost died it was just after midday. One year ago I left my home for school and never returned. I was shot in the head by a Taliban bullet and was flown out of Pakistan unconscious. Some people say I will never return home but I believe firmly in my heart that I will. Now, every morning when I open my eyes, I long to see my old room full of my things, my clothes all over the floor and my school prizes on the shelves.

Here there is any convenience you can imagine. When I stand in front of my window and look out, I see tall buildings, long roads full of vehicles moving in orderly lines, neat green hedges and lawns, and tidy pavements to walk on. Then I remember I am in Birmingham, England. I am Malala, by Malala Youfzafai, 2013. Mandela: Long Walk To Freedom Movie CLIP - Sharpeville Massacre (2013) - Idris Elba Movie HD. Remembering the Sharpeville massacre.

Sharpeville massacre was turning point in anti-apartheid movement. Nelson Mandela What legacy does he leave behind. Nelson Mandela: Mini Biography avec sous-titres. CNN Hero of the Year revealed: Jeison Aristizábal. Hailing from one of the poorest areas of Cali, Colombia, and waging a constant battle with cerebral palsy, the world seemed dead set against him. 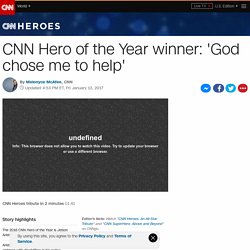 "When I was a young boy, a doctor told my mom that I would amount to nothing," said Aristizábal, 33. Family support and a dogged spirit helped Aristizábal gain independence, and he set out to ensure other disabled youth could do the same. Why We Need Heroes (Whom We Don't Worship) I looked at someone today and thought to myself: This woman isn’t trying to launch her own business in two countries she doesn’t have permanent residency visas in, make her own movies, raise children from a township, run two charities with too little money and survive as a freelance writer at the same time. 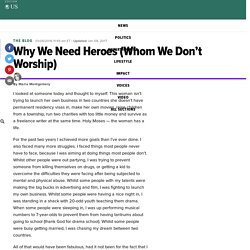 Holy Moses — the woman has a life. For the past two years I achieved more goals than I’ve ever done. I also faced many more struggles. I faced things most people never have to face, because I was aiming at doing things most people don’t. Whilst other people were out partying, I was trying to prevent someone from killing themselves on drugs, or getting a kid to overcome the difficulties they were facing after being subjected to mental and physical abuse. Nelson Mandela, Anti-Apartheid Hero, Dead at 95. Obama: Mandela is a hero for the world. 'Burka Avenger' fights for girls education in Pakistan. 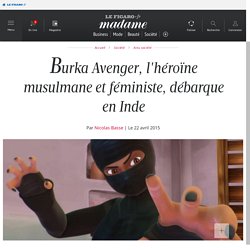 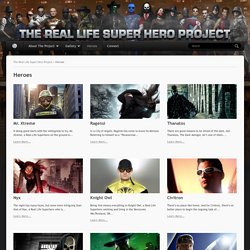 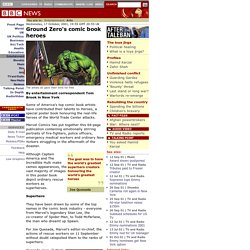 Marvel Comics has put together this 64-page publication containing emotionally stirring portraits of fire-fighters, police officers, emergency medical workers and ordinary New Yorkers struggling in the aftermath of the disaster. Although Captain America and The Incredible Hulk make cameo appearances, the vast majority of images in this poster book depict ordinary rescue workers as superheroes. Superhero They have been drawn by some of the top names in the comic book industry - everyone from Marvel's legendary Stan Lee, the co-creator of Spider-Man, to Todd McFarlane, the man who dreamt up Spawn. Real Life Superheroes.

The best arrest ever, starring Spider-man, Jedi and the Flash "IT SOUNDS like a crazy comic book splot: Spider-man foils a robbery as Jedi knights block the would-be thief's escape and the Flash watches on. 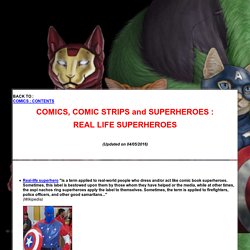 This was just what happened on Saturday morning when a business owner dressed as Spider-man stopped a man from stealing a comic book worth $160... International Free Comic Day is held around the world on the first Saturday of May. Phoenix jones real life superhero. Meet the 'real-life superheroes', Phoenix Jones and Purple Reign. "We are basically a citizen eye witness group. 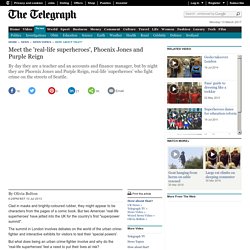 If we see a crime, we run to the victim, see if they want to press charges, at that point we'll go after the bad guy, catch him, and either hold them in position or dial 911 and wait until the cops arrive," Seattle 'superhero' Phoenix Jones says. New York Real life superheroes: Secretive group of men and women help fight crime and poverty. They are usually the stuff of fantasy. 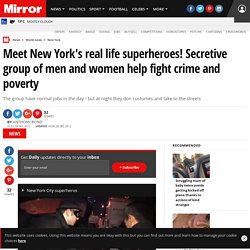 But in New York, there is a real life band of superheroes helping to fight crime and poverty. The collection of men and women do normal jobs in the daytime. But at night, they don costumes and take part in special missions. It is not known how many people are involved with The Real Life Superheroes. However, three members include Nicole Abramovici - otherwise known as The Prowler, who specialises in helping animals and the homeless. Chris Pollak is the Dark Guardian, who patrols areas known to be high in crime. Speaking to Sky News, Ms Abramovici, who dresses in a cat costume - said: "The Real Life Superheroes are amazing. Mr Pollak is a martial arts instructor during the day and says his job is mainly about ensuring trouble does not break out. Phoenix Jones announces disbandment of Rain City superheroes - Seattle 911 — A Police and Crime Blog.

Photo: JOE DYER / seattlepi.com file Phoenix Jones and his posse of Seattle superheroes make an appearance at the Occupy Seattle protests at Westlake Park in October 2011. 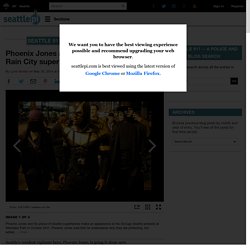 Phoenix Jones said that he understands why they are protesting, but added, "Getting arrested sucks. Bradford Batman is not alone: the real-life superheroes watching over you. In the early hours of 25 February a man dressed as Batman – the classic 1960s Adam West version – walked into a Bradford police station, frogmarching a man accused of burglary in front of him. 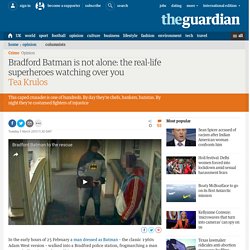 "I've caught this one for you," he reportedly told police officers before disappearing back into the night. The "Bradford Batman", aka Stan Worby, is one of hundreds of people that live a double life. By day they are bankers, hair stylists, chefs, maybe the person who sat next to you on the bus today or served your morning coffee. Meet the real life superheroes. As the sun sets over Seattle, Phoenix Jones straps on his bodysuit and pulls a black and yellow mask over his face. He is getting ready to venture into the night, looking for anyone who may be breaking the law. Captain America: The United States versus Itself, Through the Eyes of a Wartime Fictional Hero. The 1960’s – a crisis of conscience Although, the early 1960 did not see any major changes in the overall structure of comics in regards of narration, there was a conscious effort on the part of some writers to give characters a greater sense of ‘realism’ and ‘individuality’ than had previously attempted.

Stan Lee, founder of Marvel Comics, was breaking new ground: this era witnessed the first real examples of social commentary within comic-books. Some comics as well as reflecting the society and period of creation, actually commented upon social issues of the day. In their search for truth, heroes “found themselves face to face with the reality and the social problems that beset the land” (Comics: Anatomy of a Mass Medium, p.108, by Reitberger, R.). By the same token, Captain America was brought back in 1964, first as a member of The Avengers, then in his own series in Tales of Suspense. Comic Books in the History Classroom. Jul 9 2011 The summer of 2011 offers moviegoers several productions based on superheroes and comic books. Thor. Long walk to freedom trailer. 9-11 in Comics. The comic shows Captain America standing above the skyline of New York City in front of a colourful sky.

In the background, at the bottom, you can see the skyline of New York without the twin towers of the World Trade Center. From the place where they stood, in the middle at the bottom, smoke is rising, which is spreading into the sky in the centre of the picture. Captain America kneels right in the rubble. Captain America: The United States versus Itself, Through the Eyes of a Wartime Fictional Hero. World Trade Center (2006) - trailer. 9/11 Heroes: NewsOne Remembers Unsung Heroes Of 9/11. Eleven years ago on this fateful day of September 11, our confidence as a nation was ripped away, and every year since then, the horror of it all replays and our wounds are reopened. Here, NewsOne remembers some of the unsung heroes who stood on the front lines. RELATED: The 11 Most Compelling 9/11 Conspiracy Theories 1) The stories of 12 African-American firefighters (top from L to R: Leon W.

LYCEE GENERAL CLEMENCE ROYER - Myths &amp; Heroes. Superheroes In Movies - Pt.1/3. What Is A Hero? If superpowers were real: Super strength - Joy Lin. Biographie de Rosa Parks sous-titrée en français. CNN Heroes. Copy of Myths and heroes by de La Ruffie M. on Prezi. A little boy with cystic fibrosis had his dreams come true when he got to be Iron Man for a day. He Named Me Malala Official Trailer 1 (2015) - Documentary HD. What is the Hero's Journey?: Pat Soloman at TEDxRockCreekPark. WHAT IS A HERO? What is a hero? - History's HEROES from E2BN.