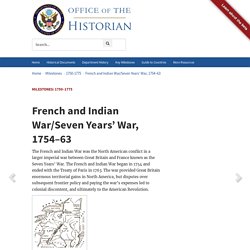 The French and Indian War began in 1754 and ended with the Treaty of Paris in 1763. The war provided Great Britain enormous territorial gains in North America, but disputes over subsequent frontier policy and paying the war’s expenses led to colonial discontent, and ultimately to the American Revolution. French and Indian War Exclusive Videos & Features. My TV provider is not listed. 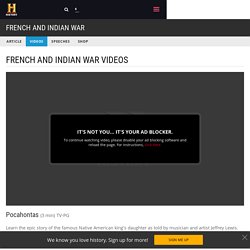 Why not? We are currently working on adding more TV providers. Please check back frequently to see if your TV provider has been added. Why do I need to log in to watch some video content? French & Indian War Facts & Worksheets For Kids - Seven Years War. This worksheet has a free sample available to download. 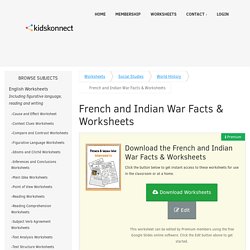 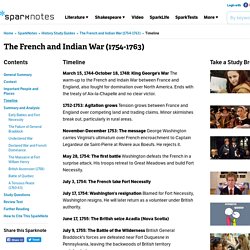 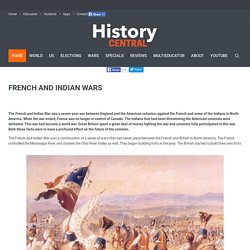 When the war ended, France was no longer in control of Canada. The Indians that had been threatening the American colonists were defeated. This war had become a world war. Great Britain spent a great deal of money fighting the war and colonists fully participated in this war. Both these facts were to have a profound effect on the future of the colonies. American Indian Wars - Wikipedia. The American Indian Wars, or Indian Wars, were the multiple armed conflicts between European governments and colonists, and later American settlers or the United States government, and the native peoples of North America. 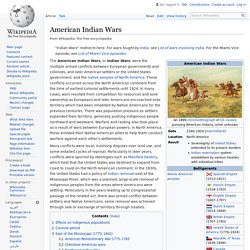 These conflicts occurred across the North American continent from the time of earliest colonial settlements until 1924. In many cases, wars resulted from competition for resources and land ownership as Europeans and later Americans encroached onto territory which had been inhabited by Native Americans for the previous centuries. There was population pressure as settlers expanded their territory, generally pushing indigenous people northward and westward. French and Indian War. Who/What/Where/When French and Indian War Definition: War fought between Great Britain and its two enemies, the French and the Indians of North America. 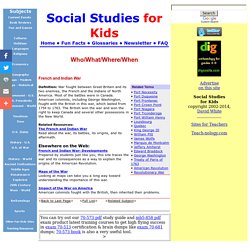 Most of the battles were in Canada. French and Indian War - Wikipedia. This article is about the conflict from 1754 to 1763. 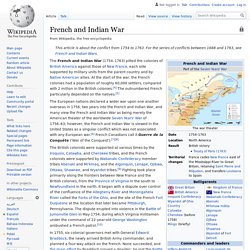 For the series of conflicts between 1688 and 1763, see French and Indian Wars. The name French and Indian War, used mainly in the United States, refers to the two main enemies of the British colonists: the royal French forces and the various indigenous forces allied with them. British and European historians use the term the Seven Years' War, as do English speaking Canadians.[4] French Canadians call it La guerre de la Conquête (the War of the Conquest)[5][6] or (rarely) the Fourth Intercolonial War.[7][not in citation given] Fighting took place primarily along the frontiers between New France and the British colonies, from Virginia in the south to Newfoundland in the north.

It began with a dispute over control of the confluence of the Allegheny and Monongahela rivers, called the Forks of the Ohio, and the site of the French Fort Duquesne (within present-day Pittsburgh, Pennsylvania). Fort Duquesne - Wikipedia. Fort Duquesne (/duːˈkeɪn/, French: [dyken]; originally called Fort Du Quesne) was a fort established by the French in 1754, at the convergence point of the Allegheny and Monongahela rivers in what is now downtown Pittsburgh in the U.S. state of Pennsylvania. 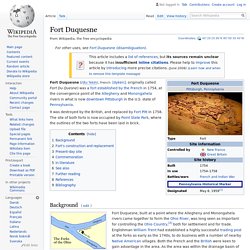 Background[edit] Map indicating the locations of the two forts. Fort Duquesne, built at a point where the Allegheny and Monongahela rivers came together to form the Ohio River, was long seen as important for controlling the Ohio Country,[2] both for settlement and for trade. Englishman William Trent had established a highly successful trading post at the forks as early as the 1740s, to do business with a number of nearby Native American villages. Both the French and the British were keen to gain advantage in the area. French and Indian War - Facts & Summary. The Seven Years’ War (called the French and Indian War in the colonies) lasted from 1756 to 1763, forming a chapter in the imperial struggle between Britain and France called the Second Hundred Years’ War. 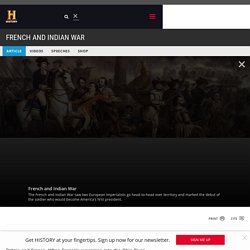 In the early 1750s, France’s expansion into the Ohio River valley repeatedly brought it into conflict with the claims of the British colonies, especially Virginia. During 1754 and 1755, the French defeated in quick succession the young George Washington, Gen. North American history.