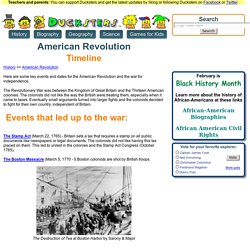 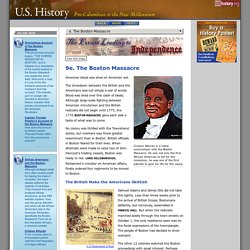 He was not only the first African American to die for the revolution, he was one of the first patriots to give his life for the cause. American blood was shed on American soil. The showdown between the British and the Americans was not simply a war of words. Blood was shed over this clash of ideals. Although large-scale fighting between American minutemen and the British redcoats did not begin until 1775, the 1770 Boston Massacre gave each side a taste of what was to come. 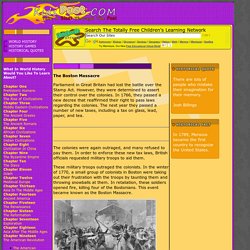 However, they were determined to assert their control over the colonies. In 1766, they passed a new decree that reaffirmed their right to pass laws regarding the colonies. The next year they passed a number of new taxes, including a tax on glass, lead, paper, and tea. Boston Massacre for Kids « The situation in Boston grew more tense by the day. 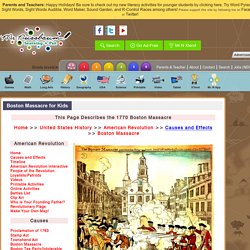 Local skirmishes between townspeople and British soldiers (Redcoats) increased in frequency as did belligerence toward British soldiers. Rumors abounded throughout the city about possible attacks by soldiers or by the Sons of Liberty. Boston Massacre - Wikipedia. Background Boston, the capital of the Province of Massachusetts Bay and an important shipping town, was a major center of resistance to unpopular acts of taxation by the British Parliament in the 1760s.[6] In 1768, the Townshend Acts were placed upon the colonists, by which a variety of common items that were manufactured in Britain and exported to the colonies were subjected to import tariffs. 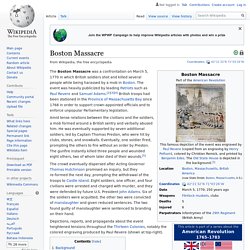 Colonists objected that the Townshend Acts were a violation of the natural, charter, and constitutional rights of British subjects in the colonies.[6] The Massachusetts House of Representatives began a campaign against the Townshend Acts by sending a petition to King George III asking for the repeal of the Townshend Revenue Act. The House also sent what became known as the Massachusetts Circular Letter to other colonial assemblies, asking them to join the resistance movement,[6] and called for a boycott of merchants importing the affected goods.[7]