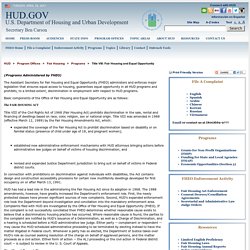 Basic components of the Office of Fair Housing and Equal Opportunity are as follows: The FAIR HOUSING ACT Title VIII of the Civil Rights Act of 1968 (Fair Housing Act) prohibits discrimination in the sale, rental and financing of dwellings based on race, color, religion, sex or national origin. S.557 - 100th Congress (1987-1988): Civil Rights Restoration Act of 1987. Tracker: This bill has the status Became Law Here are the steps for Status of Legislation: IntroducedArray ( [actionDate] => 1987-06-05 [displayText] => Committee on Labor and Human Resources. 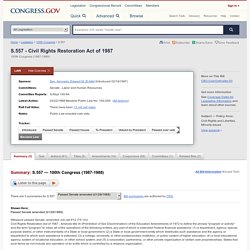 Reported to Senate by Senator Kennedy with an amendment in the nature of a substitute. With written report No. 100-64. A Guide to Disability Rights Laws. This guide provides an overview of Federal civil rights laws that ensure equal opportunity for people with disabilities. 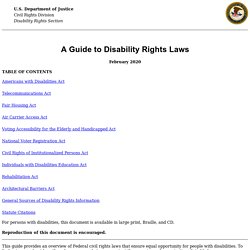 To find out more about how these laws may apply to you, contact the agencies and organizations listed below. Americans with Disabilities Act (ADA) The ADA prohibits discrimination on the basis of disability in employment, State and local government, public accommodations, commercial facilities, transportation, and telecommunications. It also applies to the United States Congress. To be protected by the ADA, one must have a disability or have a relationship or association with an individual with a disability. Passengers with Disabilities. PAIMI fact sheet 2013. Patient Protection and Affordable Care Act - HealthCare.gov Glossary. Employment Opportunities for Disabled Americans Act (1986; 99th Congress S. 2209) When President-elect Trump takes office on January 20, the House, Senate, and White House will be controlled by the same party for the first time in six years. 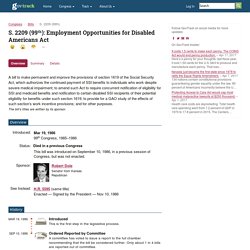 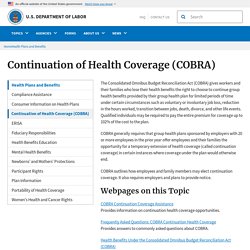 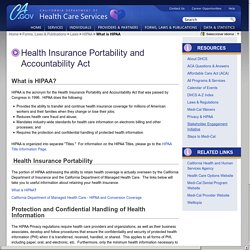 HIPAA is the acronym for the Health Insurance Portability and Accountability Act that was passed by Congress in 1996. HIPAA does the following: Provides the ability to transfer and continue health insurance coverage for millions of American workers and their families when they change or lose their jobs;Reduces health care fraud and abuse;Mandates industry-wide standards for health care information on electronic billing and other processes; and Requires the protection and confidential handling of protected health information.

Canadian Human Rights Act. Voting Accessibility for the Elderly and Handicapped Act. The Voting Accessibility for the Elderly and Handicapped Act of 1984 generally requires polling places across the United States to be physically accessible to people with disabilities for federal elections.Where no accessible location is available to serve as a polling place, a political subdivision must provide an alternate means of casting a ballot on the day of the election.This law also requires states to make available registration and voting aids for disabled and elderly voters, including information by telecommunications devices for the deaf (TDDs) which are also known as teletypewriters (TTYs).Effective September 15, 2015: A polling official may allow a voter who is physically disabled or over the age of 70 to move to the front of the line at a polling place upon request of the voter. 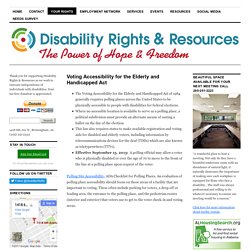 Polling Site Accessibility- ADA Checklist for Polling Places. An evaluation of polling place accessibility should focus on those areas of a facility that are important to voting. Telecommunications Access for People with Disabilities. FCC rules under Section 255 of the Communications Act require telecommunications equipment manufacturers and service providers to make their products and services accessible to people with disabilities, if such access is readily achievable. 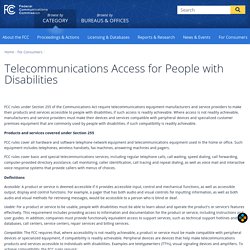 Where access is not readily achievable, manufacturers and service providers must make their devices and services compatible with peripheral devices and specialized customer premises equipment that are commonly used by people with disabilities, if such compatibility is readily achievable. Products and services covered under Section 255 FCC rules cover all hardware and software telephone network equipment and telecommunications equipment used in the home or office. The History of Special Education Law.

In these days, it is doubtful that any child may reasonably be expected to succeed in life if he is denied the opportunity of an education. - Brown v. 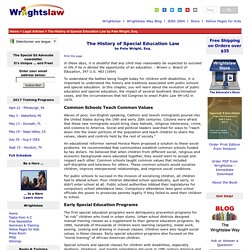 Board of Education, 347 U.S. 483 (1954) To understand the battles being fought today for children with disabilities, it is important to understand the history and traditions associated with public schools and special education. In this chapter, you will learn about the evolution of public education and special education, the impact of several landmark discrimination cases, and the circumstances that led Congress to enact Public Law 94-142 in 1975. Civil Rights Of Institutionalized Persons. Rehabilitation Act of 1973 - United States Access Board. 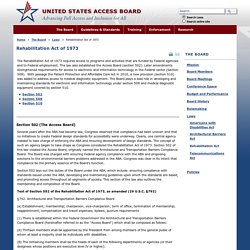 These programs include: State Councils on Developmental DisabilitiesProtection and Advocacy systemsUniversity Centers for Excellence in Developmental Disabilities Education, Research and Service Projects of National Significance. ADA.gov homepage. MSRSOTA. AOTA Practice Advisory on OT in EI Final Draft cw 3. Congressional Affairs. Payment and Delivery System Reform. A combination of factors necessitates reforms to the health care payment and delivery systems. These include unsustainable public and private health care spending growth, an increased prevalence of chronic health conditions, and rising demand for health care services due to the aging of the population and the expected growth in the number of people with health insurance. The goals of reform are aptly summarized by the “Triple Aim”: improving the individual experience of care, improving the health of populations, and reducing the per capita cost of care. The Affordable Care Act and other health care reform initiatives have incentivized increased integration and coordination of care delivery.