Basinski & offthesky: Music to Get Unstuck By - my bad sidemy bad side. Often I get stuck. 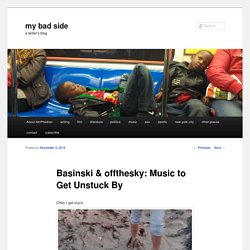 I don’t know how the room is – the stairway or carpet, the door – or what a character sees – the wallpaper, the light from the kitchen – or what she thinks – a dull pain in her calf, a memory of a first-grade teacher – and sit and stare, trying to think it through. Music gets me out. William Basinski and offthesky never fail. William Basinki’s Disintegration Loops – literally the sound of a loop of electronic music slowly disintegrating into other sounds – rises and falls, thick like an ocean.

The front door has been left open, only just, the chain casting a long jeweled shadow on the trim.There is an old wooden banister on the stairs; a narrow carpet runs up it, rolling vines and roots, worn blue, a corner of it bunched at the bottom. Jason Corder’s musical project offthesky is more immediate, starting engines and building long tenuous chords, moving relentlessly to the precipice. She has her keys, holding them low in her hand. Guided by Voices: The Club Has Reopened - my bad sidemy bad side.

Guided by Voices, featuring Robert Pollard on lead vocals, have a full-on sound, murky and raw, a straight shot of indulgence and jolly vice, like nothing else. 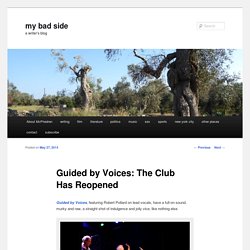 The band has been around for over 30 years and, despite never cracking into a major market, has maintained a loyal following known for their chant of the faithful, “GBV!” The show is made up of some 65-80 songs – 10-14 songs in the encores alone, almost all of which – like the above Alex and the Omegas – are barely 2 minutes in length, all replete with power chords, chants and leg kicks. They are not a traditional band, although oddly enough that is exactly what they seem, a case of beer on stage, bottles of Jack Daniels and plenty of smokes to go around…yes, even today. They have split up and got back together numerous times. An Ominous Sound for an Ominous Future - my bad sidemy bad side. Fripp & Eno started it with The Heavenly Music Corporation, not ambient music but ominous and terrifying sonic explorations, lovely too. 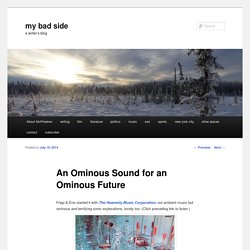 (Click preceding link to listen.) I heard the sound again, years later, at a Grateful Dead show in Miami in 1988; it was like being inside a jet engine, all-encompassing, so very loud. And then, in Steven Spielberg’s War of the Worlds (2006), a new version, low and distant, perhaps over-produced, arrived on screen. (Click preceding link to listen.) It arose again in the trailer for Chris Nolan’s Inception (2010), promising aural profundity; regrettably, the sound was brief and the movie was not. The sound became more realized in Gravity (2013), providing the soundscape for the impending doom of debris. Retribution Ragnar Kaufman ask: Who Are We? - my bad sidemy bad side. Is thinking a specifically singular activity? 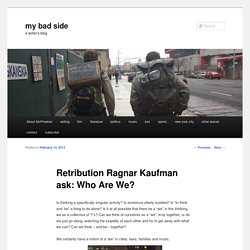 Is existence utterly isolated? Is “to think and be” a thing to do alone? Is it at all possible that there be a “we” in this thinking, we as a collective of “I”s? Can we think of ourselves as a “we”, truly together, or do we just go along, watching the stupidity of each other and try to get away with what we can? Tibet House Benefit 2014 - my bad sidemy bad side. The 2014 Tibet House Benefit, at Carnegie Hall last night, continues to be a musical highlight of the year. 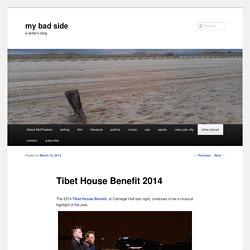 Highlights included the enchanting music of Phillip Glass (accompanied by Nico Muhly & Tim Fain), surprise guest Sufjan Stevens offering two of his Planetarium songs, and New Order front-manned by the raw, seemingly ageless Iggy Pop. Not even Patti Smith could ruin the night with her ego and histrionics, grabbing poor Mr. Glass at the end, dragging him into her spotlight. The good news is that, this time, she didn’t spit on the floor. It is a privilege to attend this event. Top Ten Concerts - my bad sidemy bad side. Yes, I admit this is both anal and childish, but I like to remember the places where my thoughts worked best – even if I didn’t remember much of it at show’s end. 10. 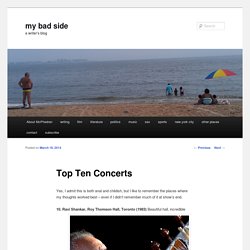 Ravi Shankar, Roy Thomson Hall, Toronto (1983) Beautiful hall, incredible music. 9. The Myth of Absinthe - my bad sidemy bad side. Absinthe has the reputation all bad boys and girls dream of. 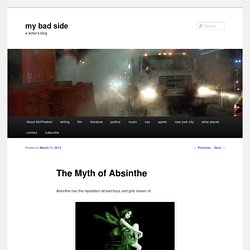 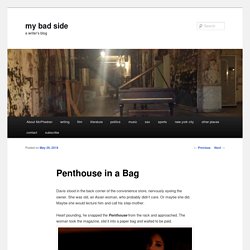 She was old, an Asian woman, who probably didn’t care. Or maybe she did. Maybe she would lecture him and call his step-mother. Heart pounding, he snapped the Penthouse from the rack and approached. The woman took the magazine, slid it into a paper bag and waited to be paid. He walked outside, pausing at the corner of the parking lot to slide the magazine into his pant leg. “Hey.” Davis redid his shoelace. February in Manhattan's Financial District - my bad sidemy bad side. Manhattan's East River Begins to Freeze - my bad sidemy bad side. February 2015 has been reported as the coldest month in 35 years for Manhattan. 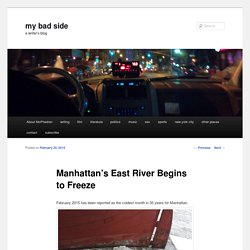 The East River isn’t frozen yet. But it’s getting there. (Click here or the images below for video.) Time for the Trump Shirts? - my bad sidemy bad side. Trump isn’t Hitler. 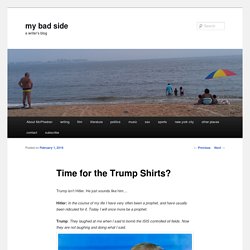 He just sounds like him… Hitler: In the course of my life I have very often been a prophet, and have usually been ridiculed for it. Today I will once more be a prophet. Trump: They laughed at me when I said to bomb the ISIS controlled oil fields. Now they are not laughing and doing what I said. Hitler: As Fuehrer of the German people and Chancellor of the Reich, I can thank God at this moment that he has so wonderfully blessed us in our hard struggle for what is our right.

Trump: We need somebody that can take the brand of the United States and make it great again. Hitler: As a Christian I have no duty to allow myself to be cheated, but I havethe duty to be a fighter for truth and justice. Trump: I have a great relationship with God. Trump: America's Greatest Stand-Up - my bad sidemy bad side. Like anyone with a brain, I have been flummoxed by the sensational rise of Donald Trump as a presidential candidate. In Donald McGrath’s New Yorker piece, We Have a Serious Problem, it was surmised that Trump was trying to bow out of the race asap: “’I said that Megyn Kelly was menstruating. I insulted Carly Fiorina’s face. I did a routine about Ben Carson’s belt that should have provoked a psychiatric intervention. I proposed internment camps for the Muslims already here, and you’re telling me that my numbers are what?’” Others have theorized that the American electorate always oscillates between extremes, making the bombastic Trump an ideal follow-up to Obama’s taciturn manner.

I admit to being transfixed by Trump’s pontificating, his meandering monologues that emphasize ADHD more than repetitive policy. He mused on how he might behave in the White House: The president is calling an air conditioning company. He reflected on the game of politics: They’re all playing games, folks. Ice Friday: Michel Foucault's "The Use of Pleasure" - my bad sidemy bad side. Vaughn & Staples' "Saga": More Sci-Fi Rubbish - my bad sidemy bad side. In the continuing quest for inspiration in writing my science fiction book Aqaara, I was recommended the graphic novel series Saga by Brian Vaughn and Fiona Staples.

I was most interested in its apparently profound treatment of sexual themes and imagery, and yet was disappointed to realize that it is neither thought-provoking nor titillating. The work is nothing more than a morass of simplistic morality propped upon a landscape of superficial sexuality in which – surprise! – a transgender character recently appears. The story-line is vapid, the dialogue interminable to say nothing of the farcical content. But worse of all are the references to the authors’ own process themselves, their love of books and killing off their babies. John Barleycorn - my bad sidemy bad side. John Barleycorn - my bad sidemy bad side. This Too Will Be Gone: Forgetting. - my bad sidemy bad side. This moment matters. This moment right now. I am writing. You are reading. This is it. Maybe more than that. And yet we do just that. People are killed. So right. None of us will remember what it was were not supposed to forget. Pandemic Accomplishments: Week 13 - my bad sidemy bad side.