‘Pits and perverts:’ the legacy of communist Mark Ashton. PETER FROST remembers one of The Sun’s most despicable headlines and how it was taken up as rallying call for working-class unity It has taken three decades for the BBC and the British film industry to tell the amazing story of Mark Ashton. 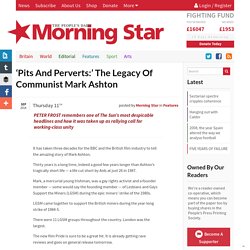 Thirty years is a long time, indeed a good few years longer than Ashton’s tragically short life — a life cut short by Aids at just 26 in 1987. Pits, perverts and the true story behind Pride. The UK in 1984 was a divided country. 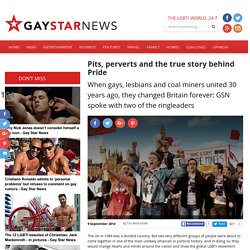 But two very different groups of people were about to come together in one of the most unlikely alliances in political history. And in doing so, they would change hearts and minds around the nation and show the global LGBTI movement anything is possible. This is the true story of Lesbians and Gays Support the Miners – a story which has just been turned into the critically acclaimed film, Pride, out in theaters in Britain on 12 September. The Miners’ Strike was sparked by Margaret Thatcher’s Conservative government announcing in March 1984 it was to close over 70 coal pits. The resulting industrial action lasted for a year. Pits, perverts and the true story behind Pride. The UK in 1984 was a divided country. 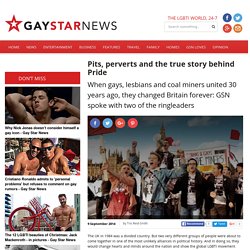 But two very different groups of people were about to come together in one of the most unlikely alliances in political history. And in doing so, they would change hearts and minds around the nation and show the global LGBTI movement anything is possible. Pride, film on British miners-LGBTQ solidarity, review. This video is called Pride, International Trailer 1 (2014). 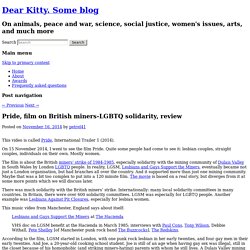 On 15 November 2014, I went to see the film Pride. Quite some people had come to see it: lesbian couples, straight couples, individuals on their own. Mostly women. The Cabinet Papers. Coming out of the dark ages. Forty years ago in Britain, loving the wrong person could make you a criminal. 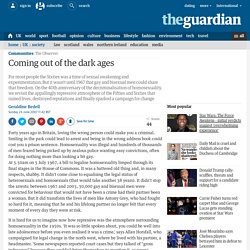 Smiling in the park could lead to arrest and being in the wrong address book could cost you a prison sentence. Homosexuality was illegal and hundreds of thousands of men feared being picked up by zealous police wanting easy convictions, often for doing nothing more than looking a bit gay. At 5.50am on 5 July 1967, a bill to legalise homosexuality limped through its final stages in the House of Commons. It was a battered old thing and, in many respects, shabby. It didn't come close to equalising the legal status of heterosexuals and homosexuals (that would take another 38 years). It is hard for us to imagine now how repressive was the atmosphere surrounding homosexuality in the 1950s. Antony Grey, who later became secretary of the Homosexual Law Reform Society (HLRS), describes having to make 'painstaking circular tours through the dictionary' to articulate the feelings he'd had since he was nine. 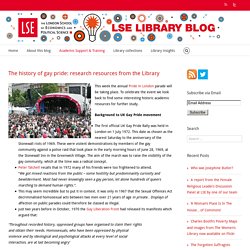 To celebrate the event we look back to find some interesting historic academic resources for further study. Background to UK Gay Pride movement The first official UK Gay Pride Rally was held in London on 1 July 1972. This date as chosen as the nearest Saturday to the anniversary of the Stonewall riots of 1969. ‘Throughout recorded history, oppressed groups have organised to claim their rights and obtain their needs. Contemporary surveys show considerable hostility to gay rights. Come Together. When miners and gay activists united: the real story of the film Pride. In September 2010, the writer Stephen Beresford was about to leave a meeting with film producer David Livingstone when he was asked: "Is there any story you are burning to write? 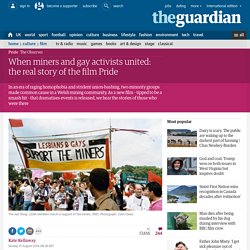 " "Well, there is one," he replied, hesitating at the door, "but no one is ever going to make it. " Lesbians and Gays Support the Miners. History[edit] In November 1984, a group of lesbians broke away from LGSM to form a separate group, Lesbians Against Pit Closures, although some lesbians remained active in the LGSM campaign rather than joining the women-only group. 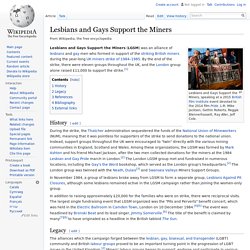 Legacy[edit] An archive of the London group's work is kept at the People's History Museum in Manchester, England. It includes the minutes of the weekly meetings, correspondence, press cuttings, publicity material, enamel badges, photographs and the group's banner. References[edit] Bibliography[edit] External links[edit] All Out! Meet the Real-Life Heroes Who Inspired the Movie Pride. In 1984, striking British miners found an unlikely ally: a London LGBT group. 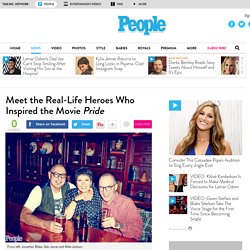 The new movie Pride – which has already sparked whispers of award-season buzz after its crowd-pleasing premieres in Cannes and Toronto – chronicles this bond. PEOPLE sat down at the Toronto International Film Festival with three of the protesters who inspired the film and learned that the partnership didn't end when the strike did. Mike Jackson, 60, co-founded Lesbians and Gays Support the Miners after the miners put out a call for help. LGSM then decided to raise money and back the working-class community of Dulais Valley, in South Wales, where the miners were based – and a lifelong bond began. "It was very interesting sending that first letter," Jackson remembers with a laugh. 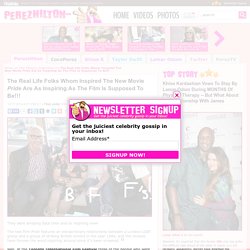