Volkswagen finally on a roll in U.S. Volkswagen is gaining traction in the U.S. after decades of promises and false starts. 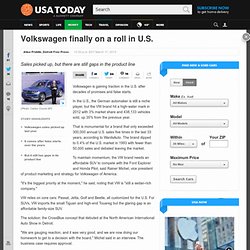 In the U.S., the German automaker is still a niche player, but the VW brand hit a high-water mark in 2012 with 3% market share and 438,133 vehicles sold, up 35% from the previous year. That is monumental for a brand that only exceeded 300,000 annual U.S. sales five times in the last 33 years, according to WardsAuto. The brand dipped to 0.4% of the U.S. market in 1993 with fewer than 50,000 sales and debated leaving the market. To maintain momentum, the VW brand needs an affordable SUV to compete with the Ford Explorer and Honda Pilot, said Rainer Michel, vice president of product marketing and strategy for Volkswagen of America. "It's the biggest priority at the moment," he said, noting that VW is "still a sedan-rich company. 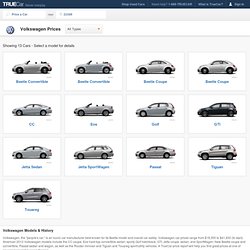 A TrueCar price report will help you find great prices at one of several local Volkswagen Dealers. A total of 15.8 million Volkswagen Beetles were manufactured from 1938 to 1980 in Wolfsburg, Emden, and Osnabrueck, Germany. Of this, nearly 332,000 were Cabriolets, which became a classic dream car right from the start. Volkswagen TSI Engines Explained. While other automakers are playing with the idea of mass-market hybrids and electric cars, Volkswagen Group has continued to rely on its family of petrol engines as it tries to take the no.1 spot in the automotive industry. 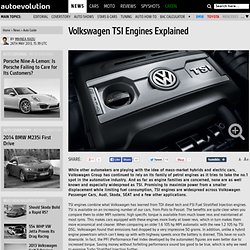 And as far as engine families are concerned, none are as well known and especially widespread as TSI. Promising to maximize power from a smaller displacement while limiting fuel consumption, TSI engines are widespread across Volkswagen Passenger Cars, Audi, Skoda, SEAT and a few other applications. TSI engines combine what Volkswagen has learned from TDI diesel tech and FSI Fuel Stratified Injection engines. TSI is available on an increasing number of our cars, from Polo to Passat. Hybrid Cars - Volkswagen of America. We got a little hyper about mileage. 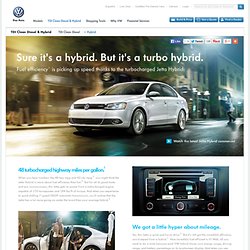 Yes, this Jetta is quick and fun to drive.3 But it's still got the incredible efficiency you'd expect from a hybrid.1 How incredibly fuel-efficient is it? Well, all you need to do is look, because each VW hybrid shows your energy usage, driving range, and battery percentage on its touchscreen display. And when you see how much fuel you're saving, you'll be pleasantly surprised by how economical this little speed demon can be.2 Supercharged Touareg Hybrid. Volkswagen Logo History @ DasTank.com. Trademark News:VW wins Logo Dispute. 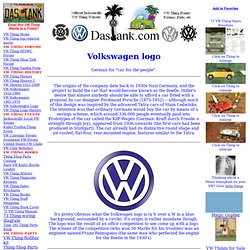 The copyright holder of the internationally-famous VW logo is not to be Nikolai Borg. His suit against the Wolfsburg car concern has been dismissed by the Vienna Business Court. The judges did not deny in any way that Borg had drawn up the design in the 30s and had also delivered it. But the logo itself had already existed for a while prior to this. Automotive Brand Loyalty Winners/Losers – 2012 Year End - Blog Posts by Bashar Cholagh. The automotive industry achieved nearly 14.5 million new vehicle sales in 2012, which resulted in a sales improvement of 13.4% versus 2011. 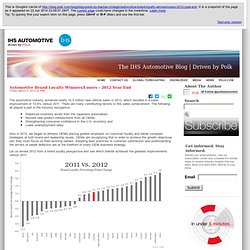 There are many contributing factors to this sales achievement. The following all played a part in the industry resurgence: Stabilized inventory levels from the Japanese automakers Several new product introductions from all OEMs Strengthening consumer confidence in the U.S. economy and Lower unemployment rates. Brand Loyalty: A VW Case Study. Building customer loyalty is critical for businesses. 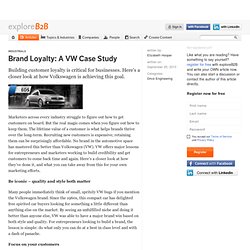 Here's a closer look at how Volkswagen is achieving this goal. Marketers across every industry struggle to figure out how to get customers on board. Volkswagen & Subaru have the highest Brand Loyalty Intent among new car intenders. Source: Roy Morgan Single Source (Australia) May 2009 - April 2010 n=5,690 & May 2011 April 2012 n=6,136. 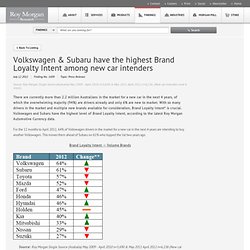 (New car intenders next 4 years). There are currently more than 2.2 million Australians in the market for a new car in the next 4 years, of which the overwhelming majority (94%) are drivers already and only 6% are new to market. With so many drivers in the market and multiple new brands available for consideration, Brand Loyalty Intent* is crucial. VW tops brand loyalty, but Ford also rising. Latest reseach shows which brands we're loving, and which are losing. 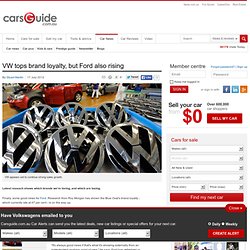 Finally, some good news for Ford. Research from Roy Morgan has shown the Blue Oval's brand loyalty - which currently sits at 47 per cent - is on the way up. The Melbourne car maker sits a few rungs down the ladder from the top - that spot is held down by a 64 per cent customer loyalty percentage by the hard-charging German marque Volkswagen, who has bold global volume plans.

Ford spokesman Neil McDonald says Ford has shown improvements across a lot of our nameplates. "The addition of EcoBoost into the family is resonating strongly with our customers," he says. Volkswagen Moves into the Fast Lane, Launches R Performance Division - Car News. Volkswagen is set to grow its portfolio of sporty models, having just formed a new subsidiary, Volkswagen R GmbH. 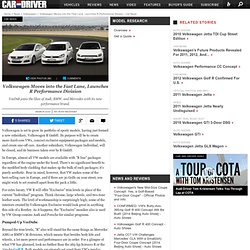 Its purpose will be to create more-hard-core VWs, concoct exclusive equipment packages and models, and create one-off cars. Another subsidiary, Volkswagen Individual, will be closed, and its business taken over by R GmbH. In Europe, almost all VW models are available with "R line" packages regardless of the engine under the hood. There’s no significant benefit to the modified body cladding that makes up the bulk of such packages; it’s purely aesthetic. Bear in mind, however, that VW makes some of the best-selling cars in Europe, and if there are 30 Golfs on your street, you might wish to set yourself apart from the pack a little. For extra luxury, VW R will offer "Exclusive" trim levels in place of the current "Individual" program.

Brand Profiles & Valuations of the World’s Top Brands. Volkswagen SWOT analysis 2013. Demographics Unveiled! Who Succeeds In Attracting Younger Buyers And Who Still Pulls In The Old Farts? We’ve all heard the comments: I don’t want to get a Cadillac, that’s my grandfather’s car! A new study recently completed by TrueCar. com, showed that Mitsubishi, Mazda and Volkswagen have the highest concentration of younger buyers. The study was completed in May 2010 and looked at the last full year of available data. TrueCar also identified the best deals* on models for this demographic based on current actual transactions.

Www.volkswagenag.com/content/vwcorp/info_center/en/talks_and_presentations/2012/01/Global_Auto_Industry_Conference.bin.html/binarystorageitem/file/Volkswagen+in+the+US+-+An+Evolving+Growth+Story.pdf. Volkswagen's Big Game of Risk: The Ambitious Plan for World Domination - Feature. Volkswagen is bold. Bold enough to declare that it will be the No. 1 seller of vehicles in the world by 2018. Think about that. In seven years, about one product cycle, the Volkswagen Group—made up of the VW, Audi, Bentley, Bugatti, Lamborghini, and Porsche brands, as well as a few more not sold in the U.S. —plans to leave Toyota, ­General Motors, and the rest of the industry’s big dogs in the dust. Volkswagen finally on a roll in U.S. Volkswagen’s Next Task: Change Way Americans Picture Brand. CrossBlue critical to VW growth plans.

DETROIT – The brand once defined solely by its bug-like people’s car and flower-power microbus dedicated a perhaps unprecedented amount of its exhibit floor space to trucks at the just-concluded North American International Auto Show here. The centerpiece of this year’s Volkswagen stand was the new CrossBlue midsize cross/utility vehicle concept that appears bound for production in 2015.

But also given prominent play were the sporty CrossCoupe CUV concept originally unveiled at the 2011 Tokyo auto show and R-Line performance versions of the production Tiguan and Touareg CUVs introduced at the NAIAS for the ’14 model year. The positioning was no accident. Volkswagen: Changing perceptions and positioning - Stretching a brand.

Volkswagen (VW) is a famous international brand name that has traditionally been associated with the mass market, its most famous model being the Beetle. Indeed, it is currently exploiting nostalgia with the new Beetle retro-model. However, not content with sticking to the categories where it enjoys success, the company is also attempting to move into the prestige- and luxury-car segments dominated by established brands like Mercedes and BMW. Its first venture into this market segment is with the new Passat V6 Syncro, which is out of the price range of the typical VW buyer. Evidently, other models are planned at higher level segments and prices. Even though VW owns Audi, Bentley, and Lamborghini, amongst other brands, many people are skeptical that it can stretch its own brand upwards, when consumer perceptions still associate the VW-branded cars with smaller and less prestigious vehicles.

BRANDtalk - Think Unique, Think Volkswagen. BRANDtalk - The People's Branded And Wanted Icon. Volkswagen was founded before World War 2 in 1937 by the Nazi trade union – the German Labour Front. It has a colourful history and has survived many milestones, including its factory in Wolfsburg being a major bomb target! Volkswagen: Das auto giant. By Alex Taylor III, senior editor-at-large. Volkswagen Brand Claim < About < Volkswagen South Africa < Volkswagen South Africa. Volkswagen is a strong, enduring brand, with a rich history and heritage. This heritage began with the legendary Beetle, which made motoring history in the 1950s by providing affordable transport to millions of people. Since then, Volkswagen cars have successfully become benchmark vehicles in their respective categories – from six generations of Golf, to the beloved Kombi and the amazing Touareg.