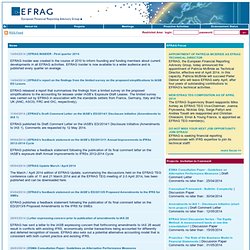 The limited survey was carried out by EFRAG in association with the standards setters from France, Germany, Italy and the UK (ANC, ASCG, FRC and OIC, respectively). 11/04/2014 | EFRAG's Draft Comment Letter on the IASB's ED/2014/1 Disclosure Initiative (Amendments to IAS 1) An online information resource on all things bank board-related. 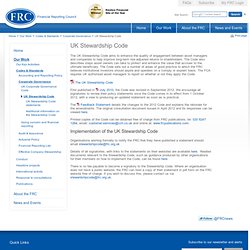 The Code also describes steps asset owners can take to protect and enhance the value that accrues to the ultimate beneficiary. The Code sets out a number of areas of good practice to which the FRC believes institutional investors should aspire and operates on a 'comply or explain' basis. The FCA requires UK authorised asset managers to report on whether or not they apply the Code. The UK Stewardship Code First published in. 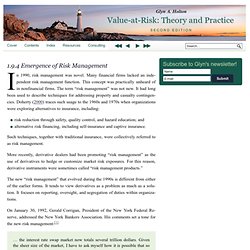 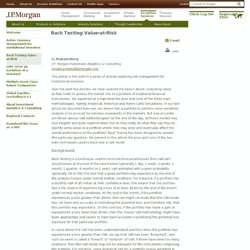 Morgan Investment Analytics & Consulting romain.p.berry@jpmorgan.com This article is the sixth in a series of articles exploring risk management for institutional investors. U.S. Securities and Exchange Commission. The Laws That Govern the Securities Industry. Securities Act of 1933 Often referred to as the "truth in securities" law, the Securities Act of 1933 has two basic objectives: require that investors receive financial and other significant information concerning securities being offered for public sale; and prohibit deceit, misrepresentations, and other fraud in the sale of securities. 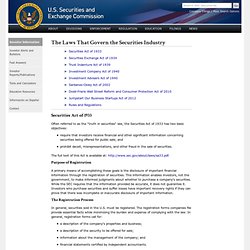 Dodd-Frank and the Law. Dodd–Frank Wall Street Reform and Consumer Protection Act. The Dodd–Frank Wall Street Reform and Consumer Protection Act (Pub.L. 111–203, H.R. 4173; commonly referred to as Dodd-Frank) was signed into federal law by President Barack Obama on July 21, 2010 at the Ronald Reagan Building in Washington, DC.[1] Passed as a response to the Great Recession, it brought the most significant changes to financial regulation in the United States since the regulatory reform that followed the Great Depression.[2][3][4] It made changes in the American financial regulatory environment that affect all federal financial regulatory agencies and almost every part of the nation's financial services industry.[5][6] As with other major financial reforms, a variety of critics have attacked the law, some arguing it was not enough to prevent another financial crisis or more "bail outs", and others arguing it went too far and unduly restricted financial institutions.[7] Origins and proposal[edit] Share in GDP of U.S. financial sector since 1860[9] 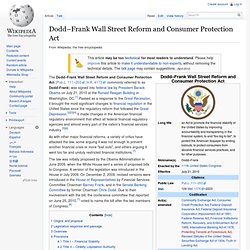 Dodd-Frank Act. Sarbanes-Oxley Act Forum. The Sarbanes-Oxley Act 2002. Sarbanes–Oxley Act. The bill was enacted as a reaction to a number of major corporate and accounting scandals including those affecting Enron, Tyco International, Adelphia, Peregrine Systems and WorldCom. 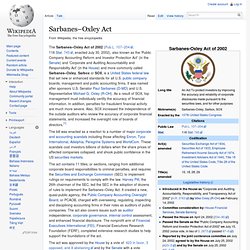 These scandals cost investors billions of dollars when the share prices of affected companies collapsed, and shook public confidence in the US securities markets. The act was approved by the House by a vote of 423 in favor, 3 opposed, and 8 abstaining and by the Senate with a vote of 99 in favor, 1 abstaining. President George W. Bush signed it into law, stating it included "the most far-reaching reforms of American business practices since the time of Franklin D. Roosevelt. Sarbanes-Oxley Basics. Value-at-Risk (VaR) EmailShare Value-at-risk (VaR) is a prob­a­bilis­tic met­ric of mar­ket risk (PMMR) used by banks and other or­ga­ni­za­tions to mon­i­tor risk in their trad­ing port­fo­lios. 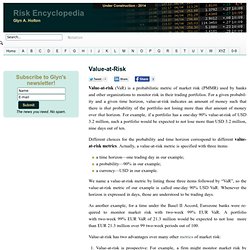