Choose MyPlate. Panera Nutrition. Report examines antibiotics in meats on fast food menus. Most top U.S. restaurant chains have no publicly available policy to limit regular use of antibiotics in their meat and poultry supply chains, according to the "Chain Reaction" report by Friends of the Earth, the Natural Resources Defense Council and four other consumer interest, public health and environmental organizations. 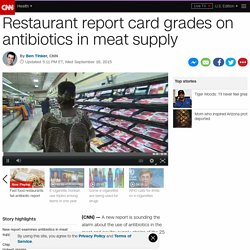 "When livestock producers administer antibiotics routinely to their flocks and herds, bacteria can develop resistance, thrive and even spread to our communities, contributing to the larger problem of antibiotic resistance," the authors wrote in the report, which was released Tuesday. "The worsening epidemic of resistance means that antibiotics may not work when we need them most: when our kids contract a staph infection (MRSA), or our parents get a life-threatening pneumonia. " As people are eating out more than ever, the researchers behind the report wanted to look closely at "industry leaders and laggards.

" How did your favorite food fare? National Institute of Diabetes and Digestive and Kidney Diseases (NIDDK) About Overweight and Obesity This publication describes the prevalence of overweight and obesity in the United States. 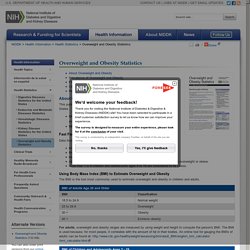 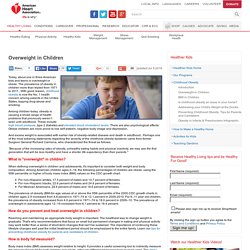 The prevalence of obesity in children more than tripled from 1971 to 2011.. With good reason, childhood obesity is now the No. 1 health concern among parents in the United States, topping drug abuse and smoking. Among children today, obesity is causing a broad range of health problems that previously weren’t seen until adulthood. These include high blood pressure, type 2 diabetes and elevated blood cholesterol levels.

There are also psychological effects: Obese children are more prone to low self-esteem, negative body image and depression. And excess weight is associated with earlier risk of obesity-related disease and death in adulthood.. “Because of the increasing rates of obesity, unhealthy eating habits and physical inactivity, we may see the first generation that will be less healthy and have a shorter life expectancy than their parents. " Fast Food Nation. Learn The Facts. "The physical and emotional health of an entire generation and the economic health and security of our nation is at stake. 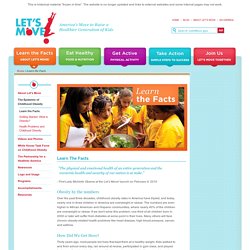 " - First Lady Michelle Obama at the Let’s Move! Launch on February 9, 2010 Obesity by the numbers Over the past three decades, childhood obesity rates in America have tripled, and today, nearly one in three children in America are overweight or obese. The numbers are even higher in African American and Hispanic communities, where nearly 40% of the children are overweight or obese. How Did We Get Here? Thirty years ago, most people led lives that kept them at a healthy weight. Today, children experience a very different lifestyle. Thirty years ago, kids ate just one snack a day, whereas now they are trending toward three snacks, resulting in an additional 200 calories a day.

Portion sizes have also exploded- they are now two to five times bigger than they were in years past. Now that’s the bad news. Childhood obesity, prevalence and prevention. Although definition of obesity and overweight has changed over time [13, 14], it can be defined as an excess of Body Fat (BF). 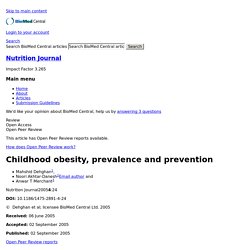 There is no consensus on a cutoff point for excess fatness of overweight or obesity in children and adolescents. Williams et al. [15] measured skin fold thickness of 3320 children aged 5–18 years and classified children as fat if their percentage of body fat was at least 25% and 30%, respectively, for males and females. The Center for Disease Control and Prevention defined overweight as at or above the 95th percentile of BMI for age and "at risk for overweight" as between 85th to 95th percentile of BMI for age [16, 17]. Class Action Lawsuit Targets McDonald's Use of Toys to Market to Children. A mother of two from Sacramento, Calif., says that McDonald’s uses toys as bait to induce her kids to clamor to go to McDonald’s and to develop a preference for nutritionally poor Happy Meals. 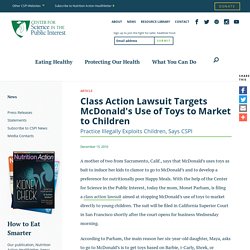 With the help of the Center for Science in the Public Interest, today the mom, Monet Parham, is filing a class action lawsuit aimed at stopping McDonald’s use of toys to market directly to young children. The suit will be filed in California Superior Court in San Francisco shortly after the court opens for business Wednesday morning. According to Parham, the main reason her six-year-old daughter, Maya, asks to go to McDonald’s is to get toys based on Barbie, i-Carly, Shrek, or Strawberry Shortcake. The food seems almost beside the point to the kids, says Parham, because the toy monopolizes the attention of Maya and her two-year-old sister Lauryn. Documents cited by CSPI in the lawsuit show that the Parham family’s experience isn’t accidental. See what experts are saying about Parham v.