| McFarling Law Group was formed in 2003 by Emily McFarling Esq.

The Psychological and Emotional Distress of a Divorce. There is more to divorce than the actual legal proceedings, initiated by a Las Vegas divorce lawyer, to end the marriage. 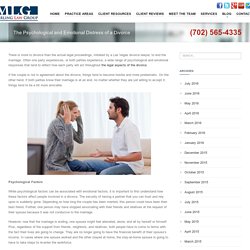 Often one party experiences, or both parties experience, a wide range of psychological and emotional responses that tend to reflect how each party will act throughout the legal aspects of the divorce. If the couple is not in agreement about the divorce, things tend to become hostile and more problematic. On the other hand, if both parties know their marriage is at an end, no matter whether they are yet willing to accept it, things tend to be a bit more amicable. Psychological Factors While psychological factors can be associated with emotional factors, it is important to first understand how these factors affect people involved in a divorce.

However, now that the marriage is ending, one spouse might feel alienated, alone, and all by herself or himself. Emotional Factors FearAngerHatredDepressionAnxietyStress. 7 Questions to Ask Yourself before Getting Remarried – McFarling Law Group. Getting married is a leap into the unknown the first time around, so you’d think that going for a second or third time would be easier. 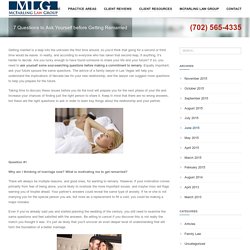 In reality, and according to everyone who has taken that second leap, if anything, it’s harder to decide. Are you lucky enough to have found someone to share your life and your future? If so, you need to ask yourself some soul-searching questions before making a commitment to remarry. Equally important, ask your future spouse the same questions. The advice of a family lawyer in Las Vegas will help you understand the implications of Nevada law for your new relationship, and the lawyer can suggest more questions to help you prepare for the future. Taking time to discuss these issues before you tie the knot will prepare you for the next phase of your life and increase your chances of finding just the right person to share it.

Question #1. McFarling Law Group. Court trials can be grueling for anyone, and divorce trials are doubly so, in large part because they force the participants to dredge up an array of painful memories in an environment where they are pitted head to head against their spouse. 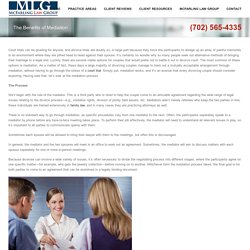 It’s certainly no wonder why so many people seek out alternative methods of bringing their marriage to a legal end. Luckily, there are several viable options for couples that would prefer not to battle it out in divorce court. The most common of these options is mediation. As a matter of fact, these days a large majority of divorcing couples manage to hash out a mutually acceptable arrangement through mediation, without having to go through the stress of a court trial. Simply put, mediation works, and it’s an avenue that every divorcing couple should consider exploring. The Process We’ll begin with the role of the mediator. There is no standard way to go through mediation, as specific procedures vary from one mediator to the next. Keeping Cool During A Divorce. Divorce can be a difficult, even traumatic, event in any adult’s life. 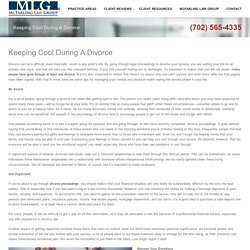 By going through legal proceedings to divorce your spouse, you are setting your life on an entirely new track; one that will take you into unknown territory. If you find yourself feeling lost or distraught, it’s important to realize that you are not alone—many people have gone through at least one divorce. But it’s also important to realize that there’s no reason why you can’t survive and even thrive after the final papers have been signed. With that in mind, here are some tips for managing your mental and physical health during this pivotal phase in your life. Be Social. Glossary of Divorce & Custody Terminology. Divorce is an undeniably difficult event and, for many people, the stress is compounded by their unfamiliarity with the process. 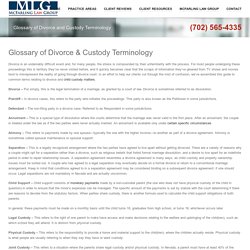 For most people undergoing these proceedings this is territory they’ve never visited before, and it quickly becomes clear that the scraps of information they’ve gleaned from TV shows and movies tend to misrepresent the reality of going through divorce court. In an effort to help our clients cut through the mist of confusion, we’ve assembled this guide to common terms relating to divorce and child custody matters. Divorce – Put simply, this is the legal termination of a marriage, as granted by a court of law. Divorce is sometimes referred to as dissolution. Plaintiff – In divorce cases, this refers to the party who initiates the proceedings. Defendant – The non-filing party in a divorce case. Annulment – This is a special type of dissolution where the courts determine that the marriage was never valid in the first place.

Sources: Dynamics of Domestic Violence. The subject of domestic violence most often emerges in public discussion when stories of celebrity abuse surface. 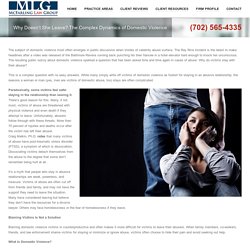 The Ray Rice incident is the latest to make headlines after a video was released of the Baltimore Ravens running back punching his then fiancée in a hotel elevator hard enough to knock her unconscious. The resulting public outcry about domestic violence sparked a question that has been asked time and time again in cases of abuse: Why do victims stay with their abuser? This is a complex question with no easy answers. While many simply write off victims of domestic violence as foolish for staying in an abusive relationship, the reasons a woman or man (yes, men are victims of domestic abuse, too) stays are often complicated. Paradoxically, some victims feel safer staying in the relationship than leaving it.