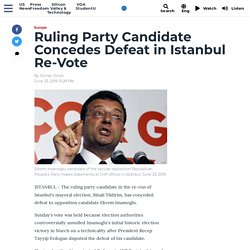 Sunday's vote was held because election authorities controversially annulled Imamoglu's initial historic election victory in March on a technicality after President Recep Tayyip Erdogan disputed the defeat of his candidate. Electoral authorities rejected Erdogan's AKP Party's claims of voting fraud, but ordered a revote on the grounds a number election officials were ineligible.

The opposition condemned the decision and claimed the Sunday vote is now more than just about who runs the city. In a sign of the importance of Sunday's election, voting was brisk from the moment the Kadikoy district ballot station opened, in a city where people traditionally vote late. Early heavy voting was reported across the city. The importance of Sunday's election has seen hundreds of thousands of people cut short their vacations to vote. 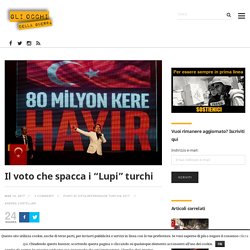 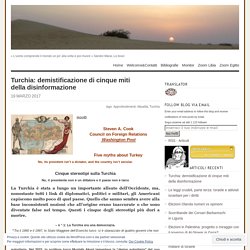 Why some European states have declared war against Turkish ally. In preparation for the 16 April referendum, Turkish ministers planned to meet their citizens in Germany to campaign for the crucial constitutional amendments Instead, Germany decided to ban these election gatherings, an unprecedented measure that compelled both the foreign and family affairs ministers to hold much smaller meetings with their citizens inside the Turkish consulate. 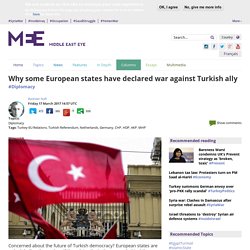 There is nothing to warrant concern by any of the European states whether Turkey is governed by a presidential system or a parliamentary one What is surprising is that, on the whole, Berlin’s relations with Ankara are not bad. Turkish-Dutch “children” stuck in the middle of identity spat. The latest spat between Turkey and the Netherlands has riled both countries while the rest of Europe watched as it reached dramatic proportions. 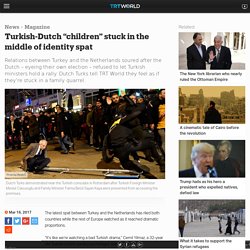 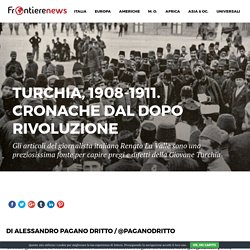 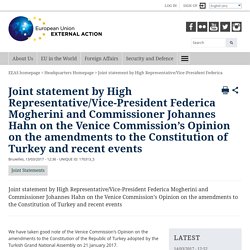 As highlighted by the Venice Commission's Opinion, Turkey has the sovereign right to decide over its system of governance. We acknowledge the fact that the country is going through challenging times and stand by it in its fight against the scourge of terrorism. We will continue to support the country's hospitality to refugees from war-torn areas in its close vicinity. We appreciate that Turkey has announced actions to address the Council of Europe's recommendations regarding the State of Emergency and bring the measures taken in line with European standards. The proposed amendments, if approved at the referendum of 16 April, and especially their practical implementation, will be assessed in light of Turkey's obligations as an EU candidate country and as a member of the Council of Europe.

La rissa che Erdogan vuole per vincere il referendum - Remocontro. Europe's mask has come off now, says President Erdogan. Trial begins for murder of Turkish commando who stopped coup attempt. Turkish soldiers accused of attempting to assassinate President Recep Tayyip Erdogan on the night of the failed July 15 coup are escorted by gendarmes as they arrive at the court in Mugla, Turkey, Feb. 21, 2017. 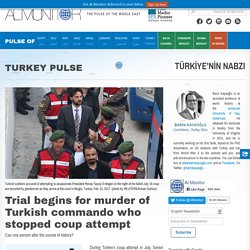 (photo by REUTERS/Kenan Gurbuz) Author: Barın Kayaoğlu Posted February 22, 2017 Can one person alter the course of history? Summary⎙ Print Turks are closely watching the trial of those accused of murdering special forces commando Omer Halisdemir, who was killed in the line of duty as he played a key role in stopping last summer’s coup attempt. All eyes on Pompeo as CIA chief arrives in Ankara. Mike Pompeo waits to be sworn in as director of the Central Intelligence Agency in US Vice President Mike Pence's ceremonial office in the Eisenhower Executive Office Building at the White House in Washington, Jan. 23, 2017. 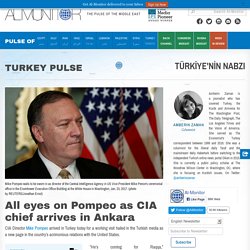 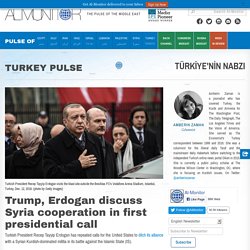 (photo by Getty Images) Author: Amberin Zaman Posted February 8, 2017 Turkish President Recep Tayyip Erdogan has repeated calls for the United States to ditch its alliance with a Syrian Kurdish-dominated militia in its battle against the Islamic State (IS). Ankara shifts public assets to sovereign wealth fund. Turkey's Finance Minister Naci Agbal speaks during an interview in Ankara, Sept. 27, 2016. (photo by REUTERS/Umit Bektas) Author: Amberin Zaman Posted February 7, 2017 Controversy continues to rage over the government’s decision to transfer the assets of major public companies including Turkey’s state-owned bank and telephone operator as well as its 49.12% stake in Turkish Airlines to a new sovereign wealth fund.

Summary⎙ Print In a move critics say is financially risky and intended to concentrate money into corrupt hands, the Turkish government has created a sovereign wealth fund to finance its infrastructural projects as the lira falls. The purpose of the fund, which according to Hurriyet controls assets worth 31.3 billion Turkish lira ($8.8 billion), is to finance big-ticket infrastructure projects and other investments, some of which are deeply controversial as well. The Reina Nightclub Attack Might Change Turkey-China Relations. January 19, 2017 Photo: Turkish flags are placed near the entrance of Reina nightclub in Istanbul, Turkey, January 17, 2017. REUTERS/Osman Orsal The Reina nightclub attack in Istanbul on New Year’s Eve left 39 dead and dozens injured. When he was captured on January 17, Turkish officials said that the main suspect, Abdulkadir Masharipov, is an Uzbek national and a member of the Islamic State. Signs show that he might also be an ethnic Uyghur, and though the attacker carried out the shooting alone, at least 36 people who are thought to be involved have been detained since the assault, several of whom were Uyghurs.

Turkey's constitutional reform: All you need to know. Last December, Turkey's ruling Justice and Development Party (AKP) unveiled a raft of constitutional amendments that aim to fundamentally change the way Turkey is governed. The controversial draft constitution, dubbed the "Turkish-style presidency", is seeking to replace the current parliamentary system with a presidential one paving the way for President Recep Tayyip Erdogan, who has held power for the past 13 years, first as prime minister and since 2014 as president, to become the sole executive authority in the country. The proposed constitution, which is currently being debated in parliament, foresees the creation of vice presidents and the abolition of the office of the prime minister.

If the amendments are accepted, first by parliament and then in a referendum, there would no longer be a formal cabinet answerable to parliament. Log In - New York Times. Turkish MPs pass Article 13th of Constitution change. Will Turkey leave NATO? A Turkish flag (R) flies among other flags of NATO members during the North Atlantic Council at NATO headquarters in Brussels, July 28, 2015. (photo by REUTERS/Francois Lenoir) Author: Yekaterina Chulkovskaya Posted January 10, 2017 In 2013, Recep Tayyip Erdogan, then Turkey's prime minister, surprised many with his statement about the Shanghai Cooperation Organization (SCO).

Addressing Russian President Vladimir Putin, he said, "Get us out of this suffering [of trying to join the European Union]. We are willing to finalize a free trade agreement with Eurasian countries. Turkey and Greece are meeting to unite the island nation of Cyprus – VICE News. Talks are happening in Geneva this week between the Greek and Turkish leaders of Cyprus in what is seen as the last real hope for securing a unified island. What’s happening? Cyprus President Nicos Anastasiades and Turkish-Cypriot leader Mustafa Akinci are holding talks to find a compromise to reunify the island, which has been divided for the past 40 years. If the discussion progresses well, the leaders will be joined by those from Greece, Turkey, and the U.K. — the three parties that guarantee Cypriot independence and security. Turchia, autobomba davanti al tribunale di Smirne. La polizia: due attentatori ucciso, uno in fuga.

While the Turkish side requested that the U.S. provide documented proof immediately, the U.S delivered the alleged documents in Jan. 2015, following constant reminders from Turkey. After careful examination of the CIA's documents, Turkish National Intelligence Agency (MIT) officials revealed that the geographic locations in the document that allegedly shows where Daesh's oil trade was conducted with Turkey does in fact show the asphalt plant of the Turkey's Kilis municipality in southeastern Turkey. Diplomatic sources also added that following this incident, U.S. officials accepted their mistake and the CIA apologized to Turkey in early 2015. Iranian-Turkish tug-of-war over Kurds. Protesters hold flags showing jailed Kurdistan Workers Party leader Abdullah Ocalan during a demonstration against Turkish President Recep Tayyip Erdogan in central Brussels, Belgium, Nov. 17, 2016. (photo by REUTERS/Yves Herman) Author: Pinar Tremblay Posted December 13, 2016 A few weeks before the devastating Dec. 10 twin bombings in Istanbul — for which Kurdish militants claimed responsibility — Al-Monitor spoke with several sources well-connected with Ankara about how Turkey might address Iran's intensified logistics support to the Kurdistan Workers Party (PKK).

Summary⎙ Print Allegations of Iranian support for the Kurdistan Workers Party (PKK) have created fresh tension in the region as Turkey faces new violence from Kurdish militants. For the past couple of months, different media outlets in Turkey and the region have been reporting that representatives of Iran’s Islamic Revolutionary Guard Corps, led by Gen. Turkey says Kurdish militants may be behind deadly soccer bombing. Deaths reported in blasts in Turkey's Istanbul. Two explosions have hit the Turkish city of Istanbul, killing at least 13 people and wounding 20 others, according to news reports. Police have evacuated the area around the Besiktas football arena following Saturday's explosions, which the interior ministry called a "terrorist" car bomb attack. Reuters news agency cited security sources as saying 13 people were killed.

The arena is located across the historic Dolmabahce Palace overlooking the Bosphorus Strait. Al Jazeera's Sinem Koseoglu, reporting from Istanbul, said all the roads leading to the arena have been closed to the public. Public transportation were also suspended, she said. She said the blasts occurred about two hours after a football match attended by thousands of people at the Besiktas Vodafone arena. There was no immediate claim of responsibility for the attack. Turkish Police Detain HDP Co-Leaders Selahattin Demirtas, Figen Yuksekdag and 8 MPs - Turkey-iraq-mosul-operation-isis-ankara-role.html (PNG Image, 19 × 25 pixels)

Turkey: Measure lifting immunity could face court test. The PKK always targets civilians: A grim timeline. Give Turkey a break. Why is Turkey’s Davutoğlu getting skewered by his own party for the EU migrant deal?