DIFFAMAZIONI dello sciopero e di Jewish Voice for Peace. As prisoners recover from grueling strike, IPS maintains no demands were met. The Palestinian Committee of Prisoners’ Affairs said in a statement Tuesday that all prisoners who were transferred to different prisons during the hunger strike were returned to the prisons in which they had initially been held in before the start of the strike. 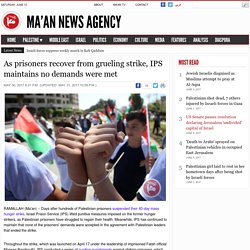 "All punitive procedures imposed in the beginning of the strike were also lifted,” the committee reported, referring to the limitation on lawyer visits, assaults of prisoners, frequent and violent cell searches, among other measures. The committee noted that the health conditions of prisoners at the Ashkelon prison were “still difficult,” following the strike, pointing out that the prisoners were currently consuming fluids and vitamins “to regain their physical power.” “In the past, the second monthly visit was fully funded by the Red Cross, which paid for the buses for the families,” senior IPS official Asher Vaknin told the committee. After 40 days, Palestinians suspend mass hunger strike in Israeli prisons.

Freedom and Dignity strike: Some of Palestine's most high profile prisoners. 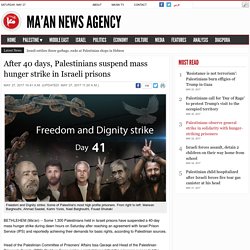 Spokesman for the Palestinian prisoners authority tells i24NEWS the US helped both sides reach an agreement The Palestinian Authority announced Saturday that a mass Palestinian hunger strike, which lasted 40 days, has ended on the first day of the Muslim festival of Ramadan. 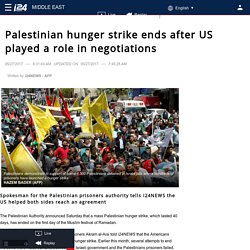 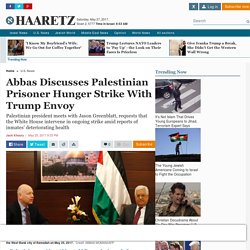 Speaking at the presidential headquarters after the meeting, Abbas said that the issue of the prisoners was discussed in depth “to see what the American side can do on the matter.” He said that "the issue of the prisoners is a sensitive and difficult one, and we want the Americans to intervene so that we can receive answers from the Israelis regarding their commitment to comply with the prisoners' demands, which there is no reason to refuse as they are legitimate and humane.

" According to a senior Palestinian official, Greenblatt is expected to meet with Netanyahu over the next 24 hours, and to relay their position to the Palestinians with an aim to end the strike, which has now lasted for 38 days. Keep updated: Sign up to our newsletter Thank you for signing up. Oops. On 38th day, hunger strikers threaten individual action to pressure Israel. RAMALLAH (Ma’an) -- As hundreds of Palestinian prisoners entered the 38th day of a mass hunger strike in Israeli custody on Wednesday, the hunger strikers have reportedly discussed escalating tactics to pressure Israeli authorities into acceding to their demands. 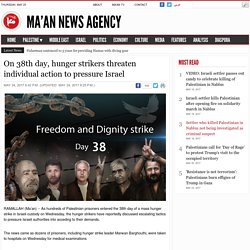 The news came as dozens of prisoners, including hunger strike leader Marwan Barghouthi, were taken to hospitals on Wednesday for medical examinations The Palestinian Prisoners’ Center for Studies (PPCS) quoted anonymous sources located inside Israeli prisons as saying that the hunger-striking prisoners were considering breaking the unity of the hunger strike should one of the hunger strikers die amid continued Israeli refusal to negotiate with the prisoners. 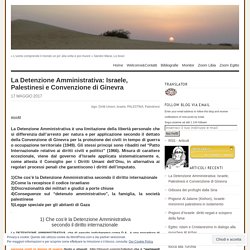 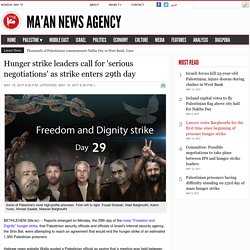 Statement: Barghouthi Calls For Civil Disobedience Of the Israeli Occupation. Marwan Barghouti has been imprisoned in Israel since 2004. 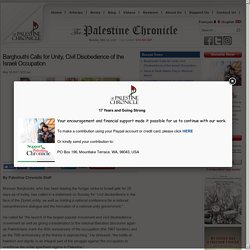 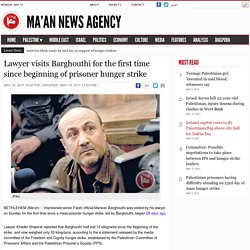 Lawyer Khader Shqeirat reported that Barghouthi had lost 12 kilograms since the beginning of the strike, and now weighed only 53 kilograms, according to the a statement released by the media committee of the Freedom and Dignity hunger strike, established by the Palestinian Committee of Prisoners’ Affairs and the Palestinian Prisoner’s Society (PPS). Barghouthi described to Shqeirat the abysmal conditions in which he was being held, saying that he was kept in a basement cell for four days, from which he was removed only when he stopped drinking water. Barghouthi’s current cell is empty of all basic necessities and infested with insects, Shqeirat said, adding that the Fatah leader had only one blanket and did not have access to any books. 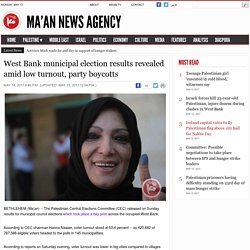 According to CEC chairman Hanna Nasser, voter turnout stood at 53.4 percent -- as 420,682 of 787,386 eligible voters headed to the polls in 145 municipalities. According to reports on Saturday evening, voter turnout was lower in big cities compared to villages and rural areas. The lowest turnout was registered in the Nablus district, with only 28 percent of registered voters heading to the polls, although CEC said voting hours were extended for Samaritans, who observe the sabbath on Saturdays. Nasser said on Sunday that 1.3 percent of voters cast white ballots, while 2.75 percent of votes were null.

Lists that were not officially tied to any political parties won 65 percent of contested municipal council seats during the election, while official political party lists obtained 35 percent of seats. Jenin. Hours of insult for minutes with my brother: My monthly trip to an Israeli jail. Palestinian prisoners sit behind glass during visiting at Gilboa prison in 2006 (AFP) Inas Abbad's brother, Mohammed Abbad, has been in an Israeli prison for 16 years, and is one of 1,500 Palestinians on hunger strike in protest at a lack of basic rights in jail. His family gets 45 minutes a month to see him. Below is a description of visiting day, its hours of waiting, its rigorous searches, and the humiliations suffered by all.

I wake at four in the morning, knowing that I did not sleep well, like every night before I have visited my brother in prison over the past 16 years. I've spent much of the night thinking about how to tell him news about the children, his friends and family, what I should say and what I shouldn't. Committee: Possible negotiations to take place between IPS and hunger strike leaders. Israeli authorities continue attempts to break mass hunger strike on 24th day. Palestinian prisoners are calling for an end to the denial of family visits, the right to pursue higher education, appropriate medical care and treatment, and an end to solitary confinement and administrative detention -- imprisonment without charge or trial -- among other demands for basic rights. Israeli violations amid weakening health conditions of hunger strikers. Pizza Hut under fire for mocking Palestinian hunger strike. L'uomo con le manette. Nelle manifestazioni di protesta che si tengono di frequente in Palestina contro l’occupazione israeliana, accanto ai colori della bandiera palestinese e al profilo familiare di Yasser Arafat, c’è una terza immagine che compare spesso.

Mostra un uomo di mezza età con le mani ammanettate ma alzate sopra la testa, in segno di vittoria. Mass hunger strike grows on 13th day, Palestinian leaders call for continued protests. BETHLEHEM (Ma'an) -- At least 100 Palestinian prisoners joined the some 1,500 Palestinians on the 13th day of a mass hunger strike on Saturday, amid a continued crackdown by Israel Prison Service (IPS) aimed at disrupting the movement inside prisons. Meanwhile, Palestinian leaders have called for the escalation of protests, a day after widespread confrontations between locals and Israeli forces across the occupied West Bank in solidarity with the strike. Abed al-Fattah Dawla, head of the Media Committee of the Freedom and Dignity Strike -- a joint committee formed by the Palestinian Prisoner’s Society (PPS) and Palestinian Committee for Prisoners’ Affairs - told Sawt al-Asra (Voice of Prisoners) radio station that 100 Palestinians being held in Israel's Megiddo prison have joined the mass hunger strike.

Akkeh visited hunger-striking prisoners Fadi Abu Aita, Luay al-Mansi, Sharar Mansour, and Ahmad Sharabati. A spokesperson for IPS was not immediately available to comment. Palestinians on strike in solidarity with prisoners. Behind bars, a famed Palestinian leads his people in a prison hunger strike. He has long been viewed as a future president of a Palestinian state, even as he is reviled by Israelis as a terrorist who is serving multiple life terms in prison for murder. This week, Marwan Barghouti resurfaced in the public eye in a way that put Israel’s government on the defensive and seems likely to burnish his credentials among Palestinians. Israeli prison forces retaliate against Palestinian hunger strikers. Israeli forces instituted measures of collective punishment against all Palestinian political prisoners refusing food, yet singled out leaders for solitary confinement.