Covid-19 Decimated the Fitness Industry, but Some Founders See It as Opportunity Knocking. Eight months ago, Lucy Sexton and Durran Dunn would have agreed: At-home workouts could never surpass the experience of going to the gym or attending a fitness class. 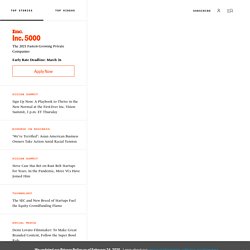 Sexton, a New York City-based boutique fitness instructor, quickly found herself out of a job--so she teamed up with another instructor she knew, Tracy Carlinsky, to host classes on Zoom. Roquette to open US$300m+ pea protein plant in Manitoba. Construction of the giant facility – strategically located in Canada, which produces c.30% of the world’s peas - is set to begin in the second quarter of 2017, with production expected to begin in 2019. 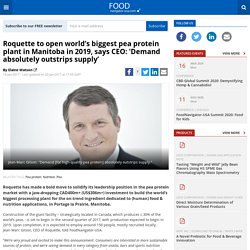 Upon completion, it is expected to employ around 150 people, mostly recruited locally, Jean-Marc Gilson, CEO of Roquette, told FoodNavigator-USA. “We’re very proud and excited to make this announcement​. Consumers are interested in more sustainable sources of protein, and we’re seeing demand in every category from snacks, bars and sports nutrition products to weight management, senior and clinical nutrition products, beverages and meat analogs.”​ Paul Douglas Melnuk Age: 65 In Saint Louis, Mo - Complete Background Info. Fusion BPO Services Opens New Center in Tirana, Albania. Albania has become one of the most sought after outsourcing destination in Europe. 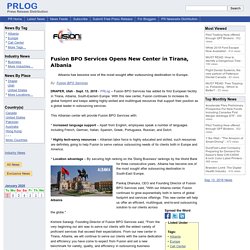 Top 10 Business Process Outsourcing Firms in Canada. Top BPO Companies in Canada - 2020 Reviews. Here are some key people who made an Ebola vaccine happen. Many people contributed to the development of Merck’s Ebola vaccine, the first licensed one for the disease based on data showing it works in humans. 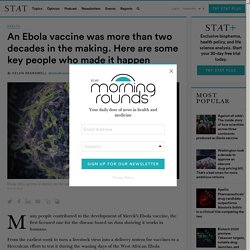 From the earliest work to turn a livestock virus into a delivery system for vaccines to a Herculean effort to test it during the waning days of the West African Ebola outbreak, scores of people were in a position to claim “I helped develop that vaccine” when European and American regulators approved Ervebo, as Merck has named it, in late 2019. STAT can’t list them all. But here are some of the people who made key contributions to the development of a vaccine that seemed for years like it would never be made. The list is chronological in terms of when the contributions occurred. The Spot at East Village – 221 Stradbrook Ave – 18 storey, 145 unit apartments – What's New in Winnipeg. Developer: Private Pension Partners Architect: MMP Architects Inc. 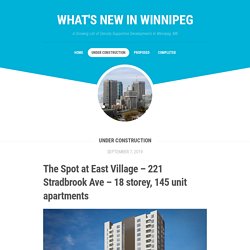 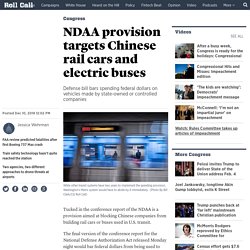 The final version of the conference report for the National Defense Authorization Act released Monday night would bar federal dollars from being used to purchase passenger rail cars or buses from state-owned or state-controlled enterprises, such as those from China. [Final defense authorization authorizes epic spending, puts guardrails on Trump] By including the provision in the bill, lawmakers sought to thwart China’s growing presence in the U.S. passenger railcar and electric bus markets. Critics of the Chinese companies say they have successfully infiltrated the U.S. market by underbidding competition drastically. Electric Bus Jobs At Warren Buffett-Backed BYD Threatened By Defense Bill Targeting Chinese Transit Suppliers. BYD, the electric vehicle maker backed by Warren Buffett’s Berkshire Hathaway, may be recalibrating plans to expand sales of California-built battery buses to U.S. transit agencies as bipartisan legislation heading to the White House excludes China-based suppliers from federal transportation funds–even if their vehicles are made at U.S. factories. 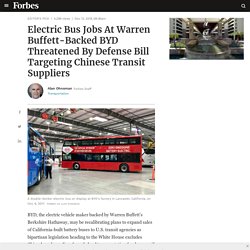 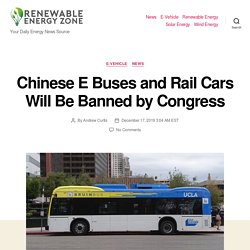 House Democrats and Senate Republican leaders inserted a provision right into a protection invoice on Monday that will prohibit transit businesses from utilizing federal funds to buy buses and rail vehicles made by Chinese-owned corporations. The order is a part of the should-pass National Defense Authorization Act that wouldn’t be applied for a two-year period and would exempt contracts if it passes as it’s at present writing. Ecommerce Platform Market Share in the USA 2019. Making up the world’s second-largest ecommerce market, online sales in the United States is expected to hit $586 billion in 2019 – a 14 percent increase from the previous year. 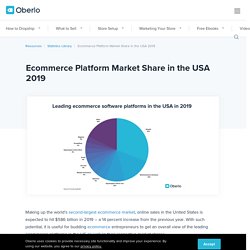 With such potential, it is useful for budding ecommerce entrepreneurs to get an overall view of the leading ecommerce platforms in the US as well as their respective market shares. The ecommerce platform market share in the USA is dominated by Shopify. At 31 percent, Shopify has nearly a third of the overall market share.   A Global Market Share Breakdown. Whether you are a digital business virtuoso, keeping your edge with a data-driven approach to decision making and your zest to invest in profitable online ventures, or one of the daring entrepreneurs that use hard facts to feed their passion for innovation… taking a good look at the current status and dynamics of the ecommerce-platform industry is going to be helpful. 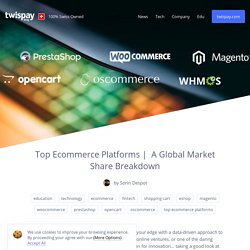 Here is why: The future of retail is online retail (aka e-tail). It varies across different cultural landscapes, but consumer behavior has been steadily shifting toward digitized service from the moment it became an option. Potato shortage looms on Prairies (Canada) Potato processing plants in Manitoba and Alberta, Canada may not run at full capacity this winter. About 20,000 acres of potatoes were in the ground in Manitoba as of the middle of October, and growers needed two weeks of favourable weather to harvest the crop.

In Alberta, temperatures dropped to -7 to -14 C for several days in October. Those temperatures likely caused frost damage to the potato crop, cutting production in the province. The production challenges and a potato shortfall could affect the new processing plants in Western Canada. Province Invests in Improvements for Internet Service in the North. Forever 21 Files For Bankruptcy, Will Shutter Over 100 Stores. Forever 21, a teen apparel retailer that expanded aggressively at malls across America as others pulled back, filed for bankruptcy on Sunday evening. The retailer ended months of speculation about the state of its business by announcing that it is seeking bankruptcy protection under Chapter 11. Forever 21 will look to close up to 178 stores in the U.S. as part of the restructuring, according to a statement from the company.

Where did Forever 21 go wrong? Nearly a decade ago, before Instagram influencers existed, Forever 21 helped teen girls dress like their favorite celebrities, for cheap. It wasn’t a novel idea — teenage girls have always wanted to dress like their idols. The dizzying speed at which Forever 21 could make those trends available and affordable, however, was. The company’s specialty became known as fast fashion, and the chain grew aggressively to become a staple in American shopping malls, opening hundreds of stores and redefining what it meant to be a traditional mall anchor.

But some analysts, such as Marshal Cohen of NPD Group, warned at the time that because Forever 21’s “coolness factor” might eventually fade, the company had “to be careful that they don’t get too big.” It apparently did get too big. Polo Park, "America’s finest racing plant" - ASD OnTrack. Victory Gift in the Polo Park Winner's Circle by Bob Polo Park, the “father” in our family tree analogy, was a 6 furlong oval that opened on June 12, 1925. R. James Speers was given credit for building Polo Park, but he was not the driving force behind the idea to build the west-end track. Rather, he came to rescue the group that had planned it. More than 100 rural communities in Manitoba will benefit from faster Internet. $83.9 million will improve high-speed Internet coverage in the province, allowing residents to get online faster January 9, 2018 – Winnipeg, Manitoba The Government of Canada is helping close the connectivity gap in Manitoba through a combined investment of $83.9 million that will enable 109* rural and remote communities to get online and access high-speed Internet.

A Tooth-Straightening Startup Runs Into Resistance. When Dentists Criticize This Online Braces Company, It Takes Them To Court. For years, a startup called SmileDirectClub has drawn fire from dentists for trying to upend the traditional braces industry. Tanco (Bernic Lake) Mine. The Tanco pegmatite is part of the Winnipeg River-Cat Lake pegmatite field. This vast pegmatite field has been subdivided into two pegmatite districts, and subsequently into several different pegmatite groups according to their mineralogy, geochemistry and location (Cerný et al., 1981).

Alexander Dennis sold to Canadian firm for £320m. E-Sports in the Olympics Face a Hazy Future. Athletes of the future won’t necessarily cross finish lines or score goals. Top Streamers Said To Earn $50,000 An Hour Playing New Games. Barack Obama Timeline. Exploration Plus Deposit Appraisal Expenditures, by Province and Territory, 2013 - 2016 Annual, 2017 Preliminary Estimates and 2018 Spending Intentions. Five things to watch for in B.C.’s new ride-hailing legislation. The B.C. government is expected to unveil new ride-hailing legislation today (Nov. 19). Passenger Vehicle for Hire. Third bus line to compete to fill void left by Greyhound in northern Manitoba. People who were left in the lurch in northern Manitoba after Greyhound decided it was the end of the line for bus service on the Prairies will soon have a new way to get around.

Untitled. StandardAero, a major maintenance, repair and overhaul specialist, is having a good year and, Marc Drobny, the new president of business aviation, says it is the result of a fresh approach he describes as “bigger, better and bolder.” Xplore Mobile website hints at October 9th service launch. Xplore Mobile, the Manitoba regional carrier that was created as a byproduct of Bell’s 2017 acquisition of Manitoba Telecom Services (MTS), has started accepting store appointments through its website. Customers in Manitoba can book an appointment at one of the carrier’s six stores starting on Tuesday, October 9th, 2018.