Create your own electrostatic motor using a 3D printer. May 31, 2015 | By Simon While the wide range of 3D print-based DIY projects could keep anybody busy for the rest of their life, some of these projects aim to solve some of the more pressing problems that we’re dealing with as of late - such as climate change and energy usage. 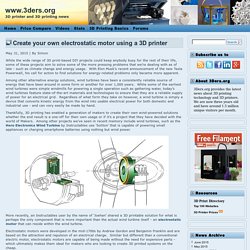 With Elon Musk’s recent announcement of the new Tesla Powerwall, his call for action to find solutions for energy-related problems only became more apparent. Among other alternative energy solutions, wind turbines have been a consistently reliable source of energy that have been around in some form or another for over 1,000 years. While some of the earliest wind turbines were simple windmills for powering a single operation such as gathering water, today’s wind turbines feature state-of-the-art materials and technologies to ensure that they are a reliable supply of power for an electrical grid. In total, the non-printed parts needed for this project include: The printed parts needed for this project include: inShare18. 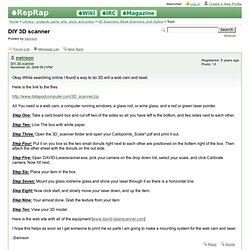 Splinescan used to have something like that as well, sans flash. I'm not sure about the technical details, but ? Javascript? Tracked the mouse and the image rotated. It was only for one scan, and I think it was hand-rolled, but I think Andrew Lewis could write a python script to do it in an evening. He may be open to approaches from people who are up for coding it or who want to play around in the splinescan source to see how things work, dunno. Once he hits a major release, I expect he may open up to co-developers who can add sexy/important features like David-scan has. I reallly want to install things like the flash thing, only without the server imploading. I'm lining up a test server to install a virgin mediawiki and phorum install on in order to test out stuff like this without rolling out unknown code on a primary server. I think it will be nice to support patch fuctionality, so that users can upload 'patches' to Darwin, Mendel, post-Mendel (Eiffel?)

Video - DIY 3D Laser Scanner by Colin Ord. Cheap DIY 3D Scanning… or not. This article did not turn out like I wanted. 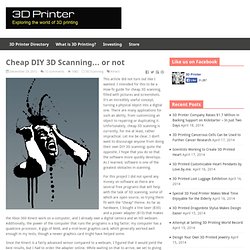 I intended for this to be a How-To guide for cheap 3D scanning, filled with pictures and screenshots. It’s an incredibly useful concept, turning a physical object into a digital one. There are many applications for such an ability, from customizing an object to repairing or duplicating it. Unfortunately, cheap 3D scanning is currently, for me at least, rather impractical. Let me be clear, I don’t want to discourage anyone from doing their own DIY 3D scanning; quite the opposite, I hope that you do so that the software more quickly develops.

For this project I did not spend any money on software as there are several free programs that will help with the task of 3D scanning, some of which are open source, so trying them fit with the “cheap” theme. Since the Kinect is a fairly advanced sensor compared to a webcam, I figured that it would yield the best results, but I had to order the adapter online. We learned that cheap 3D scanning is hard. Man Constructs 3D Printed Concrete Castle. Minnesotan contractor Andrey Rudenko is now the king of his castle; his 3D-printed concrete castle, that is. 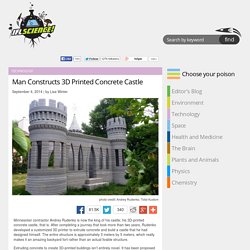 After completing a journey that took more than two years, Rudenko developed a customized 3D printer to extrude concrete and build a castle that he had designed himself. The entire structure is approximately 3 meters by 5 meters, which really makes it an amazing backyard fort rather than an actual livable structure. Extruding concrete to create 3D-printed buildings isn’t entirely novel. It has been proposed to quickly create inexpensive housing in poverty-stricken areas and even to build infrastructure on Mars before the arrival of astronauts. However, those buildings were designed to be fairly simple and lacked architectural details.

Image credit: Andrey Rudenko, Total Kustom As a machine capable of extruding concrete wasn’t commercially available, Rudenko had to develop his own. The concrete was extruded in layers that were 3 cm wide and 1 cm thick.