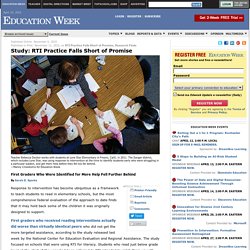 The Sanger district, which includes Lone Star, was using response to intervention at the time to identify students early who were struggling in a particular subject, and get them help before they fell too far behind. —Manny Crisostomo for Education Week First Graders Who Were Identified for More Help Fell Further Behind Response to intervention has become ubiquitous as a framework to teach students to read in elementary schools, but the most comprehensive federal evaluation of the approach to date finds that it may hold back some of the children it was originally designed to support.

The study, involving more than 20,000 students in 13 states, does not look at how students with more severe learning problems fare under RTI. Let the Child Cry: How Tears Support Social and Emotional Development. The classroom is one of only a few primary places in which children can develop sense of self, communicate, and grow in relation to others. 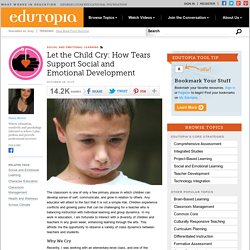 Any educator will attest to the fact that it is not a simple ride. Children experience conflicts and growing pains that can be challenging for a teacher who is balancing instruction with individual learning and group dynamics. In my work in education, I am fortunate to interact with a diversity of children and teachers in any given week, enhancing learning through the arts. This affords me the opportunity to observe a variety of class dynamics between teachers and students. Why We Cry Recently, I was working with an elementary-level class, and one of the children began to cry when conflict erupted between him and another child.

Tears have many biological and psychological bases that have been discovered through research. How Free Play Can Define Kids’ Success. Free, unstructured playtime gives kids a chance to discover their interests and tap into their creativity. 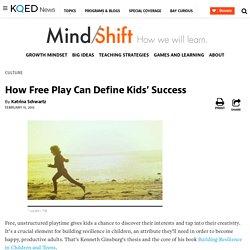 It’s a crucial element for building resilience in children, an attribute they’ll need in order to become happy, productive adults. That’s Kenneth Ginsburg’s thesis and the core of his book Building Resilience in Children and Teens. Ginsburg, a pediatrician at the Children’s Hospital of Philadelphia who also works with homeless children, has spent a lot of time trying to help young people build tools they’ll need to succeed — even when trauma has marred early lives. But the word “success” can be loaded, often carrying different connotations. To Ginsburg, a successful child is one who finds something he loves to do, is generous, empathetic and compassionate, committed to repairing the world, shows grit and the ability to collaborate, creativity and can take constructive criticism.

[RELATED READING: Are We Wringing the Creativity Out of Kids?] 7 C’s of Resilience. The Decline of Play and Rise in Children's Mental Disorders. Delaying kindergarten until age 7 offers key benefits to kids — study. A kindergartner uses a computer at a literacy station in class. 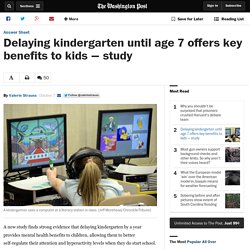 (Jeff Morehead/Chronicle-Tribune) A new study finds strong evidence that delaying kindergarten by a year provides mental health benefits to children, allowing them to better self-regulate their attention and hyperactivity levels when they do start school. The study, titled “The Gift of Time? School Starting Age and Mental Health” and published this week by the National Bureau of Economic Research, found that these benefits — which are obviously important to student achievement — persist at least until age 11. Stanford Graduate School of Education Prof. Does Common Core Ask Too Much of Kindergarten Readers? Sandwiched between preschool and first grade, kindergarteners often start school at very different stages of development depending on their exposure to preschool, home environments and biology. 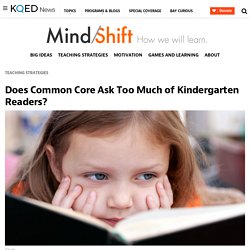 For states adopting Common Core, the standards apply to kindergarten, laying out what students should be able to do by the end of the grade.* Kindergartners are expected to know basic phonics and word recognition as well as read beginner texts, skills some childhood development experts argue are developmentally inappropriate. “There’s a wide age range for learning to read,” said Nancy Carlsson-Paige on KQED’s Forum program. Learning To Play & Playing To Learn (Part 1) I'm super big on "keeping the FUN in the FUNdamentals". 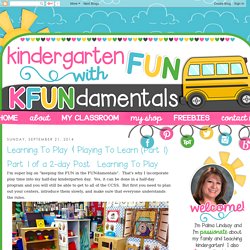 That's why I incorporate play time into my half-day kindergarten day. Yes, it can be done in a half-day program and you will still be able to get to all of the CCSS. But first you need to plan out your centers, introduce them slowly, and make sure that everyone understands the rules. Here are my best 3 tips for setting up centers: It All Begins in Kindergarten. See that chair? 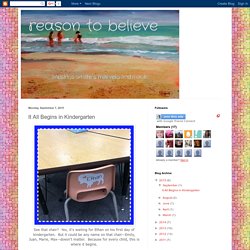 Yes, it's waiting for Ethan on his first day of kindergarten. But it could be any name on that chair--Emily, Juan, Marie, Max--doesn't matter. Because for every child, this is where it begins. Every five year old who enters through that schoolhouse door, full of wonder, intrigue, anticipation, and yes, even nervousness and fear, begins an educational journey completely in the hands of a teacher. Most of us can remember our own beginning. The Decline of Play and Rise in Children's Mental Disorders. How to set up a morning meeting in your kindergarten classroom. 14 Jun, 2015. . 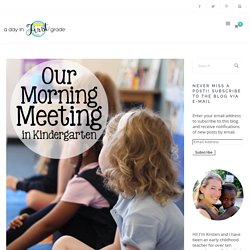 A Day In First Grade, Back to School, First Grade, Kindergarten, Preschool. Why don't more men teach kindergarten? I neutered God in my family's dinner prayer. 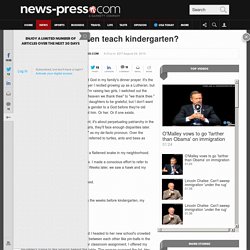 It's the same prayer I recited growing up as a Lutheran, but now that I'm raising two girls, I switched out the "father in heaven we thank thee" to "we thank thee. " I want my daughters to be grateful, but I don't want to assign a gender to a God before they're old enough to form their own conclusions about him. Or her. Or if one exists. It's not about making a theological argument; it's about perpetuating patriarchy in the minutest of ways when, by virtue of being girls, they'll face enough disparities later.

"Oh poor guy," she lamented when we saw a flattened snake in my neighborhood. We had neutered God but not her creatures. If you want your children to succeed, teach them to share in kindergarten. Kindergartners who share, cooperate and are helpful are more likely to have a college degree and a job 20 years later than children who lack those social skills, according to a new study. 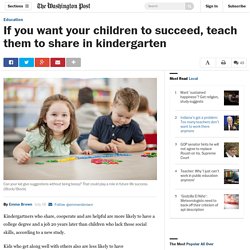 Kids who get along well with others also are less likely to have substance-abuse problems and run-ins with the law. The research, which involved tracking nearly 800 students for two decades, suggests that specific social-emotional skills among young children can be powerful predictors for success later in life. The Kindergarten Smorgasboard: A Kindergarten Smogasboard of Hopes And Dreams. Happy Monday! Remember the time that the weather said it wasn't going to rain for days and days and days...and Mr. Tips and tricks for kindergarten teachers lesson plan ideas. You join a special club when you become a kindergarten teacher.

There are only a few of us who have what it takes to manage these littlest students who are often still moving in ​a hundred directions all at once when they arrive in our classrooms. We’ve scoured our WeAreTeachers ​​Helpline and brought together 50 of the very best ideas for kindergarten teachers. 1. Start at the very beginning. “Don't assume they know how to do anything. 2. Let the Kids Learn Through Play. Photo TWENTY years ago, kids in preschool, kindergarten and even first and second grade spent much of their time playing: building with blocks, drawing or creating imaginary worlds, in their own heads or with classmates. But increasingly, these activities are being abandoned for the teacher-led, didactic instruction typically used in higher grades.

In many schools, formal education now starts at age 4 or 5. Without this early start, the thinking goes, kids risk falling behind in crucial subjects such as reading and math, and may never catch up. The idea seems obvious: Starting sooner means learning more; the early bird catches the worm. But a growing group of scientists, education researchers and educators say there is little evidence that this approach improves long-term achievement; in fact, it may have the opposite effect, potentially slowing emotional and cognitive development, causing unnecessary stress and perhaps even souring kids’ desire to learn.

Continue reading the main story. Getting organized!! Happy Wednesday friends!! I'm linking up with the Blog Hoppin' peeps to share about organization! If you knew me (or saw my bedroom floor right now) you would laugh hysterically at that first sentence. But I have to say that in this, my 5th year of teaching, I am feeling the most organized and put together of any year yet! A huge part of that has to do with my absolute favorite addition to my classroom this year: Table Drawers!! It all started late this summer when I saw this post from Katie King The Queen of First Grade Jungle. Romp and Stompin' Letters! I love watching young children learn the alphabet. It can be such a magical experience. They are gaining the key to a magical word of meaning!

You can make this experience magical for your kids, by getting them to move and "experience" the letters. Kids love to move around and explore their surroundings. You can capitalize on this and have them explore letter attributes in the same way! I have always loved using hands and feet with kids to help them learn. I recently shared an interesting photo with you. Math Stations Tips (and a Freebie) Linky Party. Math Stations! So fun and, yet somehow, so hard to wrap your head around. . . When I first started contemplating math stations, it was shortly after reading Debbie Diller’sfabulous Math Work Stations.

(You should really check it out HERE if you haven’t read it.) Common Core Kindergarten standards. Recent evaluations of the state's preschoolers have determined that only 47 percent are ready for kindergarten, compared to 83 percent judged ready last year. This drastic drop isn't the result of an abrupt, catastrophic decline in the cognitive abilities of our children. Instead it results from a re-definition of kindergarten readiness, which now means being able to succeed academically at a level far beyond anything expected in the past. Collecting Data in Kindergarten - Simply Kinder. The kindergarten testing mess. Kimberley Asselin, on May 19, teaches her kindergarten class at Riverside Elementary School in Fairfax County, Va. (Matt McClain/ The Washington Post) Kindergarten wasn’t what Kimberley Asselin expected when the school year started last fall — and, unfortunately, that turned out to be a bad thing.

Kindergarten Summer Blog Posts - Simply Kinder. Glogin?mobile=1&URI= Education pioneer debunks 'earlier is better' approach to childhood education. How to roll out student work spaces {alternative seating} Redesigning Education: Why Can't We Be in Kindergarten for Life? The Kindergarten Connection: 10 Things Your Kindergarten Student Wants You to Know. This post has been on my heart for sometime. Early Academic Training Produces Long-Term Harm. The Problem with Kindergarten. It is 1984. ‘This really isn’t kindergarten anymore’

Early Academic Training Produces Long-Term Harm. Skip A Grade? Start Kindergarten Early? It's Not So Easy : NPR Ed. On the first day of school, perhaps the only person more discussed than the "new kid" is the "new kid who skipped a grade. " A new kind of kindergarten design encourages kids to be their silly selves. Does Common Core Ask Too Much of Kindergarten Readers? Report debunks ‘earlier is better’ academic instruction for young children. Common Core Kindergarten Reading—A Disservice to Children! Takaharu Tezuka: The best kindergarten you’ve ever seen. The Disturbing Transformation of Kindergarten. Report: Requiring kindergartners to read — as Common Core does — may harm some. Read and Reveal {blending words practice}