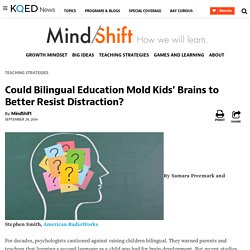 They warned parents and teachers that learning a second language as a child was bad for brain development. But recent studies have found exactly the opposite. Researchers now believe that when people learn another language, they develop cognitive advantages that improve their attention, self-control and ability to deal with conflicting information. Today the benefits of bilingualism are being put to the test in schools all across Utah. Arrowhead Elementary is just one of the more than 100 public schools in the state that have launched language immersion programs in the past five years. Supporters of immersion education argue that learning a second language is valuable preparation to participate in the global economy. The first-graders of Arrowhead Elementary in Santa Clara, Utah, are giggling. 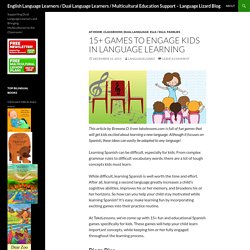 Although it focuses on Spanish, these ideas can easily be adapted to any language! Learning Spanish can be difficult, especially for kids. From complex grammar rules to difficult vocabulary words, there are a lot of tough concepts kids must learn. While difficult, learning Spanish is well worth the time and effort. Day of the Dead information for teachers and students. Get the news Log In or Subscribe to skip Already a subscriber? 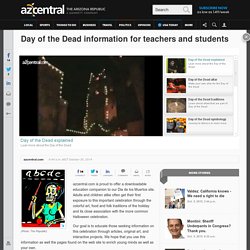 Strategies and Resources for Supporting English-Language Learners. "The hardest part of living in a different country is the language barrier. 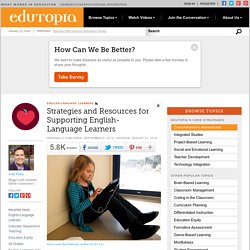 Tips For Teaching Kids to Be Bilingual. It's Hispanic Heritage Month! 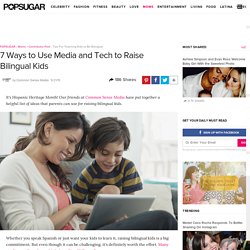 Our friends at Common Sense Media have put together a helpful list of ideas that parents can use for raising bilingual kids. Whether you speak Spanish or just want your kids to learn it, raising bilingual kids is a big commitment. But even though it can be challenging, it's definitely worth the effort. Many studies confirm the multiple benefits of bilingualism. Why Kids Need to Move, Touch and Experience to Learn. When students use their bodies in the learning process, it can have a big effect, even if it seems silly or unconnected to the learning goal at hand. 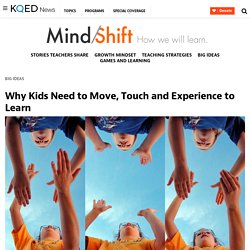 Researchers have found that when students use their bodies while doing mathematical storytelling (like with word problems, for example), it changes the way they think about math. “We understand language in a richer, fuller way if we can connect it to the actions we perform,” said Sian Beilock, professor of psychology at the University of Chicago. Consider this word problem: Two hippos and two alligators are at the zoo. The benefits of a bilingual brain - Mia Nacamulli. Amazed by what you have learned about having a bilingual brain? 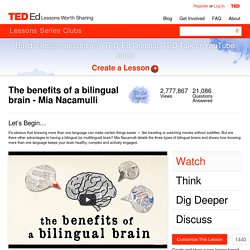 Then, start learning another language now! This website has tons of free lessons, games and quizzes to get you started! Pick one language or even two languages and get that gray matter growing. Speaking more than one language is like exercise for the brain? Read Radiolab blogger Chris Berube discusses the advantages of speaking multiple languages in his post “Mapping the Bilingual Brain” Want to know some more of the advantages of having a bilingual brain? New Syllables in SPANISH with Free Sample. Top 10 YouTube Channels to Learn Spanish. In today’s increasingly wired world, it is easier than ever to use the Web to learn a foreign language. 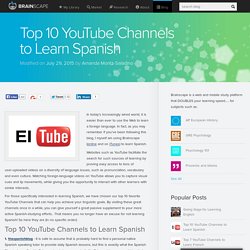 In fact, as you may remember if you’ve been following this blog, I myself am using Brainscape (online and on iTunes) to learn Spanish. Websites such as YouTube facilitate the search for such sources of learning by proving easy access to tons of user-uploaded videos on a diversity of language issues, such as pronunciation, vocabulary and even culture. Watching foreign-language videos on YouTube allows you to capture visual cues and lip movements, while giving you the opportunity to interact with other learners with similar interests.

For those specifically interested in learning Spanish, we have chosen our top 10 favorite YouTube Channels that can help you achieve your linguistic goals. By visiting these great channels once in a while, you can give yourself a great passive supplement to your more active Spanish-studying efforts.. 2. 4. 9. Señora Speedy: Proficiency Level Pyramid. I have never done a really good job of explaining proficiency levels to my students. 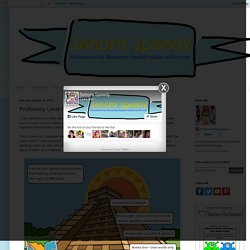 One of my goals this year was to make sure my kiddos understood the process of learning a language. I didn't want any of them to get frustrated because they couldn't speak Spanish fluently after a month. The Chinese and Japanese teachers in our district have these awesome illustrations where students "climb" the Great Wall of China or Mount Fuji from novice low up to intermediate. But us Spanish teachers didn't have anything nearly as cool and culturally relevant. So this summer I decided to make a proficiency level pyramid using Chichen Izta in Mexico. Authentic Resources for Spanish class. Top 5 Reasons for and against Spanish names. Top 5 Reasons for and against Spanish names One of our more popular posts is about an issue that most Spanish teachers are divided on. 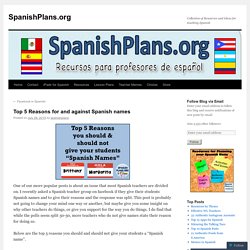 I recently asked a Spanish teacher group on facebook if they give their students Spanish names and to give their reasons and the response was split. f6163d0f72cc5c17ba5ed6d56fdcedad.jpg (JPEG Image, 500 × 501 pixels) New study shows benefits of two-way, dual-language education : Kinder Institute for Urban Research.

To put this in perspective, that is around 6.2 million more Spanish speakers than the entire population of Spain has altogether. If Spain is upset about this, the country only has itself to blame as the highest concentrations of Spanish speakers in the U.S. are in states that were formerly Spain’s possessions. Forty-seven percent of people in New Mexico speak Spanish. The benefits of a bilingual brain - Mia Nacamulli. Back-To-School Freebies and More! It's back-to-school time for me, and I've been busy working on new products that I plan to use with my classes.

I have been sharing them during the summer on my Facebook page and finally decided to put them all together in one post so you can decide what works for you. Some of them are freebies, and some of them are paid products. 1. Las Banderas de la lengua del Español. Learning Spanish, High School Spanish and Spanish. Lead with Languages on Vimeo. Hand clapping games in Spanish - Mariposa and Chocolate.

Effective Classroom Managers Do These 5 Things. I'll never forget my first teaching job. It was at a troubled urban school. I was a 23 year-old grad student with absolutely no teaching experience and absolutely no teaching certificate. I replaced a teacher in the second semester of the school year who had been fired for incompetence. At the end of that first semester in the classroom, the principal confided in me the reason she had hired me. Are there real benefits to being bilingual?

Yet before the War on Terror and the War on Drugs, Chomsky became internationally famous for proposing a novel solution to an age-old question: what does a baby know? Plato argued that infants retain memories of past lives and thus come into this world with a grasp of language. John Locke countered that a baby’s mind is a blank slate onto which the world etches its impression.

After years of research, Chomsky proposed that newborns have a hard-wired ability to understand grammar. Fun Game Apps Kids Should Play in Spanish. Website with educational songs can help teach children Spanish. 50 Latino Childrens Books You Should Know - Mamiverse. Even though Latinos are the largest U.S. minority group and are predicted to eventually become the majority, school curriculums have been slow to keep up with the nation’s changing demographics. Required reading lists contain few titles by Hispanic authors or with Hispanic characters, despite a thriving Latino children’s and young adult books movement. As book editor Adriana Dominguez points out, “we live in one of the most diverse societies in the world, and our children’s literature has to reflect the world they live in. Fun for Spanish Teachers: The Color Game. MaFLA. Mandala Coloring Pages for Spanish Learners. Mandalas are circle drawings, art patterns that integrate figures, geometric forms and colors around a unifying center.

Mandalas occur in nature, art and architecture. They can be used to present information and show the relationship of parts. Mandala coloring pages are an excellent way to integrate art and academic content. You can learn more about mandalas and their use in educational settings at the Mandala Project. The repetition and connections in mandalas make coloring them an excellent activity for language learners.

Fun Learning Activities. Simple ideas for teaching Spanish to Kids - Speekee - Spanish for Kids. The Blog. Mijares: Dual immersion programs benefit English learners and their fluent-English classmates – OCDE Newsroom. Challenges, optimism in learning Common Core in Spanish. More Than Sombreros. New Study Shows Brain Benefits Of Bilingualism : 13.7: Cosmos And Culture. The Fight For Bilingual Education Programs In The U.S. Learning second language 'slows brain ageing' 6 Multilingual Benefits That You Only Get If You Speak Another Language. What happens in the brain when you learn a language? Nine Bilingual Myths That Are Crippling Your Kids. How the Brain Benefits From Being Bilingual. Telemundo 33Reciben sandieguinos educación bilingüe » Telemundo 33. Speaking a second language may change how you see the world. Why Everyone Should Learn A Second Language. » ¿Ser bilingüe retrasa otros aprendizajes?-Todobebé – Could Bilingual Education Mold Kids’ Brains to Better Resist Distraction?

Is bilingual education worth bringing back?