Life in the Learning Lab

Vintage Ads for Libraries and Reading. By Maria Popova “There’s a future in books…and a book in your future!” 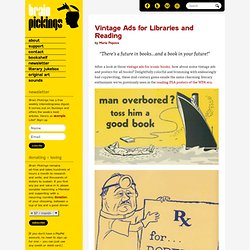 After a look at those vintage ads for iconic books, how about some vintage ads and posters for all books? Delightfully colorful and brimming with endearingly bad copywriting, these mid-century gems exude the same charming literary enthusiasm we’ve previously seen in the reading PSA posters of the WPA era. Blended Learning: Why blended? Social Media Communities of Interest for Targeting Teens/Millennials.

Research indicates that Facebook is getting more popular with adults, which could have something to do with its dwindling popularity among teens. 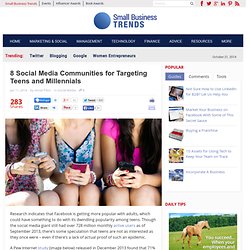 Though the social media giant still had over 728 million monthly active users as of September 2013, there’s some speculation that teens are not as interested as they once were – even if there’s a lack of actual proof of such an epidemic. A Pew Internet study (image below) released in December 2013 found that 71% of adults currently use Facebook. And 45% of those 65 or over now use Facebook, up from 35% in 2012. But it also found that 84% of Internet users between 18 and 29 use Facebook, making up the largest active age group on the site. [Image: Pew Research] Teenage Usability (Jakob Nielsen's Alertbox)