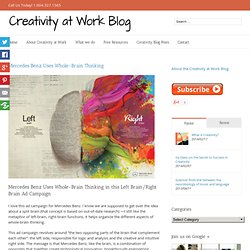 I know we are supposed to get over the idea about a split brain (that concept is based on out-of-date research) —I still like the metaphor of left-brain, right-brain functions. It helps organize the different aspects of whole-brain thinking. This ad campaign revolves around “the two opposing parts of the brain that complement each other”: the left side, responsible for logic and analysis and the creative and intuitive right side.

Copy and tagline: 10 Principles of Effective Advertising. I would like to start by thanking my new sponsor, FoxyCart. Design is what powers advertising, and it is becoming more and more crucial for a company to have an effective advertising campaign. The purpose of an ad campaign is to bring in new clients, buyers, users, and customers. That can be hard, especially today when people are going to be more careful with what they are buying. That is why it is important for an ad to be effective. Here are 10 principles of what an effective ad consists of. 1. A good advertisement must grab people almost immediately. This is an excellent ad that will make almost anyone look at it. 2.

I know you probably hear this everywhere, but it is very true. 3. The louder you talk, the more people hear you, right? It doesn’t get much louder than this, but keep in mind that louder doesn’t mean big. 4. One of the common guidelines, especially in web design, is not to make people think. Here is an example of a clever ad that doesn’t make you think too much. An Inconvenient Truth For Copywriters: How To Write Headlines And Why Your Career Depends On It. Hello, young copywriter. 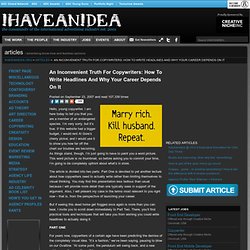 I am here today to tell you that you are a member of an endangered species. I’m very sorry, but it’s true. If this website had a bigger budget, I would rent Al Gore’s cherry picker, and I would use it to show you how far off the chart our troubles are becoming. As things stand, though, I’m just going to have to paint you a word picture. This word picture is no thumbnail, so before asking you to commit your time, I’m going to be completely upfront about what’s in store. Visual Metaphors by Richard Garrod. 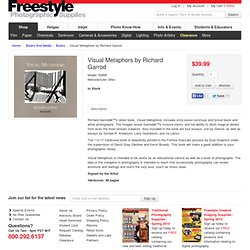 The images reveal Garrodâ€™s incisive vision, and his ability to distill magical details from even the most prosaic subjects. Also included in the book are four essays, one by Garrod, as well as essays by Donald R. Anderson, Larry Gustafson, and Ira Latour. The 11x11" hardcover book is beautifully printed in the Fultone Staccato process by Dual Graphics under the supervision of David Gray Gardner and Kevin Broady. Hiddencowboy's "inspiration" favorite pictures on VisualizeUs. Project : Meanings in imagery. Exercise : Visual metaphors For this exercise I have to collect as many examples of visual metaphor as I can. 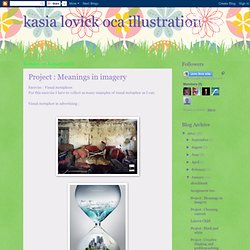 Visual metaphor in advertising : Paul Blow is a very good illustrator who works for many newspapers, it is worth to look on his webside Now I have been asked to choose phrase and create a drawn visual list of objects and subjects which could be used to symbolise them. Reaching retirement Dreams of romance Broken relationship Censorship of the press High achievement Economic catastrophe. Visual Metaphors: 7 rockstar examples on the web. What’s a metaphor? Let’s take a trip back to high school (or over to Wikipedia ), shall we? A metaphor is a direct comparison between two or more seemingly unrelated subjects describing one subject as being alike to another subject in some way. Metaphors are useful for illustrating ideas, simplifying complex subjects and making people think.

Metaphors should not be confused with a simile because a simile makes the comparison by using “like” or “as”. Metaphors are commonly used in poetry, music, writing, advertising and traditional art. “You are my sunshine .” Examples of Metaphors in Advertising. VislMeta.pdf. Pictorial Metaphor in Advertising - Char Forceville. Diğer Taylor & Francis - Book OverviewIn Pictorial Metaphor in Advertising, Charles Forceville argues that metaphor can also occur in pictures and draws on relevant studies from various ...www.ebooksubscriptions.com/home/html/moreinfo.asp? 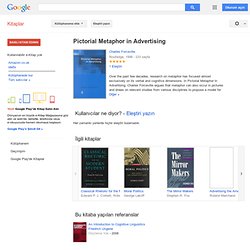