Vasculitis. Vasculitis (plural: vasculitides)[1] is a group of disorders that destroy blood vessels by inflammation.[2] Both arteries and veins are affected. 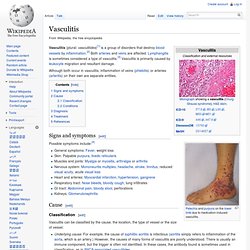 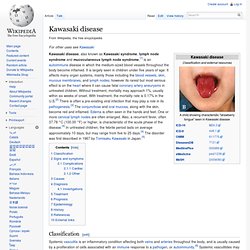 It is largely seen in children under five years of age. It affects many organ systems, mainly those including the blood vessels, skin, mucous membranes, and lymph nodes; however its rarest but most serious effect is on the heart where it can cause fatal coronary artery aneurysms in untreated children. Without treatment, mortality may approach 1%, usually within six weeks of onset. With treatment, the mortality rate is 0.17% in the U.S.[2] There is often a pre-existing viral infection that may play a role in its pathogenesis.[3] The conjunctivae and oral mucosa, along with the skin, become red and inflamed. Classification[edit] Polyarteritis Nodosa. Today News Reference Education. 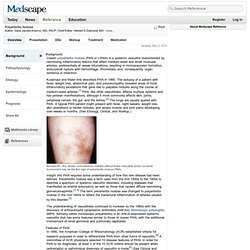 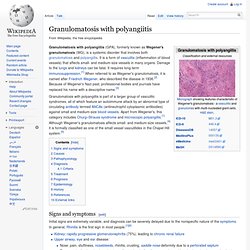 It is a form of vasculitis (inflammation of blood vessels) that affects small- and medium-size vessels in many organs. Damage to the lungs and kidneys can be fatal. It requires long-term immunosuppression.[1] When referred to as Wegener's granulomatosis, it is named after Friedrich Wegener, who described the disease in 1936.[2] Because of Wegener's Nazi past, professional bodies and journals have replaced his name with a descriptive name.[3] Granulomatosis with polyangiitis is part of a larger group of vasculitic syndromes, all of which feature an autoimmune attack by an abnormal type of circulating antibody termed ANCAs (antineutrophil cytoplasmic antibodies) against small and medium-size blood vessels. Churg–Strauss syndrome. Churg–Strauss syndrome (also known as eosinophilic granulomatosis with polyangiitis [EGPA] or allergic granulomatosis) is an autoimmune condition that causes inflammation of small and medium sized blood vessels (vasculitis) in persons with a history of airway allergic hypersensitivity (atopy). 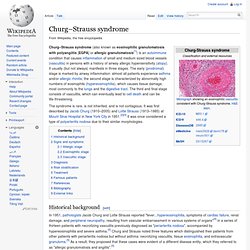 It usually (but not always) manifests in three stages. The early (prodromal) stage is marked by airway inflammation: almost all patients experience asthma and/or allergic rhinitis; the second stage is characterized by abnormally high numbers of eosinophils (hypereosinophilia), which causes tissue damage, most commonly to the lungs and the digestive tract. The third and final stage consists of vasculitis, which can eventually lead to cell death and can be life-threatening. Sturge–Weber syndrome. Sturge–Weber syndrome, sometimes referred to as encephalotrigeminal angiomatosis, is a rare congenital neurological and skin disorder. 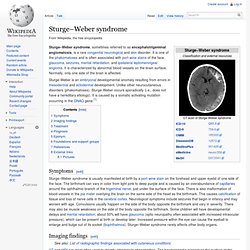 It is one of the phakomatoses and is often associated with port-wine stains of the face, glaucoma, seizures, mental retardation, and ipsilateral leptomeningeal angioma. It is characterized by abnormal blood vessels on the brain surface. Normally, only one side of the brain is affected. Sturge-Weber is an embryonal developmental anomaly resulting from errors in mesodermal and ectodermal development. Unlike other neurocutaneous disorders (phakomatoses), Sturge-Weber occurs sporadically (i.e., does not have a hereditary etiology). Dermatology Image Atlas: Dermatology Images. DermAtlas: Online Dermatology Image Library dermatology image,Sturge-Weber syndrome,vascular malformation,telangiectasia,portwine stain. Vascular tumor. Kaposi’s sarcoma: MedlinePlus Medical Encyclopedia. Kaposi's sarcoma is a cancerous tumor of the connective tissue, and is often associated with AIDS. 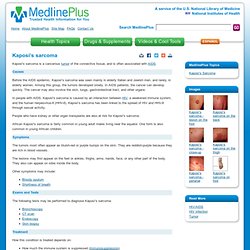 Causes Before the AIDS epidemic, Kaposi's sarcoma was seen mainly in elderly Italian and Jewish men, and rarely, in elderly women. Among this group, the tumors developed slowly. In AIDS patients, the cancer can develop quickly. The cancer may also involve the skin, lungs, gastrointestinal tract, and other organs. Bacillary Angiomatosis. Today News Reference Education Log In Register Print. 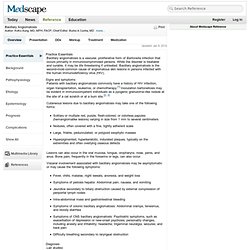 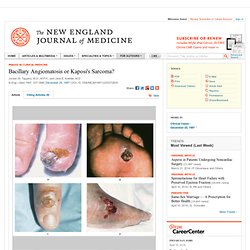 In each pair of figures, one shows a bacillary angiomatosis lesion (Panels A and B) and one shows a clinically indistinguishable Kaposi's sarcoma lesion (Panels C and D). There are many causes of moist, erosive cutaneous vascular lesions in immunocompromised patients. A tissue biopsy is required for diagnosis. Other bacterial and fungal infections, as well as pyogenic granuloma, may also have similar clinical appearances. Glomus tumor. Glomus tumor was also the name formerly (and incorrectly) used for a tumor now called a paraganglioma. 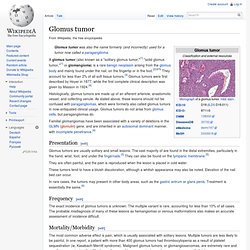 A glomus tumor (also known as a "solitary glomus tumor,"[1] "solid glomus tumor,"[1] or glomangioma) is a rare benign neoplasm arising from the glomus body and mainly found under the nail, on the fingertip or in the foot.[2]:670 They account for less than 2% of all soft tissue tumors.[3] Glomus tumors were first described by Hoyer in 1877, while the first complete clinical description was given by Masson in 1924.[4] Histologically, glomus tumors are made up of an afferent arteriole, anastomotic vessel, and collecting venule.

As stated above, these lesions should not be confused with paragangliomas, which were formerly also called glomus tumors in now-antiquated clinical usage. Glomus tumors do not arise from glomus cells, but paragangliomas do. Presentation[edit] Glomus tumors are usually solitary and small lesions. Frequency[edit] The exact incidence of glomus tumors is unknown. Cystic hygroma. A cystic hygroma (also known as cystic lymphangioma and macrocystic lymphatic malformation) is a congenital multiloculated lymphatic lesion that can arise anywhere, but is classically found in the left posterior triangle of the neck. This is the most common form of lymphangioma. It contains large cyst-like cavities containing watery fluid. Microscopically cystic hygroma consists of multiple locules filled with lymph. In the depth the locules are quite big but they decrease in size towards the surface.