10 reasons to date an Architect. They know what it means to ‘pay attention to detail’ Be it a design or cooking a meal for you, expect nothing short of perfection They ace at creative solutions You think their work is imaginative? 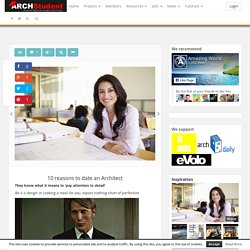 Wait till you see your anniversary presents They are classy as hell An infinite collection of sleek clothes, nothing is quite as stylish They can discuss any kind of art, anytime You’d never have to worry about them being unimpressive in front of your parents There is no such thing as a fat architect Or at least a majority of them are super healthy They know everything there is to know about good coffee Say hello to your all access pass to the best coffee shops in town Nothing sounds as impressive as showing off your architect boyfriend/girlfriend What’s not to be impressed about?

They can handle commitment 5 years of college, 2 years of masters, spending years on a single project – they sure know how to stick with something for the long run They never give up You deserve to! Download FREE Revit families and BIM content .rfa. Revit Tree Collection -... Download this collection of 40 Revit Tree Families / 3D BIM Models of 2D Polygon Trees in Plan and Elevation.

(AutoDesk 2012 Revit .rfa) - Imperial & Metric. There are 10 types of Trees in this collection with 4 different sizes - S,M,L,XL and they are great for use in you Architectural Plans and Elevations. Watch the vid for more info and click the 'buy now' buttons to purchase. Take risks, experiment with architecture: Correa to Goans.

BIG Ideas: 4 Bjarke Videos for Your Viewing Pleasure. “Geologists talk about the age where we are living as Anthropocene... this idea that we are living in a time where human presence is the strongest force of change.” 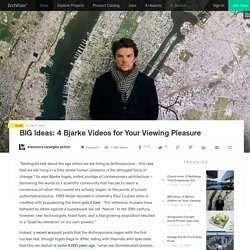 So says Bjarke Ingels, enfant prodige of contemporary architecture — borrowing the words of a scientific community that has yet to reach a consensus on when this current era actually began. In the words of a more authoritative source, 1995 Nobel laureate in chemistry Paul Crutzen (who is credited with popularizing the term) puts it best : “For millennia, humans have behaved as rebels against a superpower we call ‘Nature.’ In the 20th century, however, new technologies, fossil fuels, and a fast-growing population resulted in a ‘Great Acceleration’ of our own powers.”

Video via Louisiana Channel. Relevant segment begins at 4:00 or so. BIG's founder's philosophy is perhaps even more clear in a "Future of Storytelling" video, in which the architect is filmed from above, atop a large white canvas. "If You Want an Easy Life, Don’t Be an Architect" – 10 Takeaways from Zaha’s HuffPo Interview.

Dame Zaha Hadid is a pretty busy woman these days: the British-Iraqi architect has a plethora of new projects on the drawing board and under construction, from New York City to Beijing, and now manages a staff of over 400 across the globe. 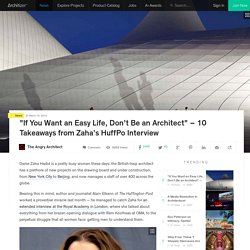 Bearing this in mind, author and journalist Alain Elkann of The Huffington Post worked a proverbial miracle last month — he managed to catch Zaha for an extended interview at the Royal Academy in London, where she talked about everything from her brazen opening dialogue with Rem Koolhaas at OMA, to the perpetual struggle that all women face: getting men to understand them. Add To Collection Save this image to a collection Via Curbed Elkann’s questions got Hadid reflecting on many of her projects, including the MAXXI museum in Rome, the London Aquatics Center, and the “nasty experience” she faced with her unrealized proposal for the Cardiff Opera House.

On the early challenges she faced when attempting to deliver ambitious projects: “Diplomacy! 7 Tips to Beautiful PowerPoint by @itseugenec. Behance. Free Building Product CAD Details, BIM, Specs and much more. EntreArchitect™ — Inspiring Success in Business, Leadership and Life for Small Firm Architects with Mark R. LePage. Final Moves. Adding Depth Via Fog I thought I would pull another move from the Bob Ross play book. 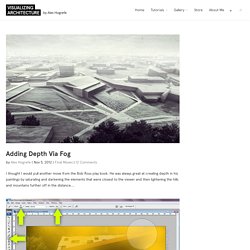 He was always great at creating depth in his paintings by saturating and darkening the elements that were closest to the viewer and then lightening the hills and mountains further off in the distance.... Landscape Tutorial Continued: Final Post Processing I posted a landscape video tutorial a few weeks back, however the video did not cover some final post processing steps used for the final look. I received some comments asking for an explanation so I thought I would put something together quickly.

Sun Rays Tutorial (Video) I received a lot of feedback and emails from people after posting the “Honduras Illustration part 2″ asking for a tutorial on adding light rays. Quick Tip: Adjusting The Verticals As I get more into photography, I find more and more things that overlap into architecture illustrations. Quick Tips: Image Softening.