Girls' education and gender equality. 15 women leading the way for girls’ education. Across the globe, about 31 million girls of primary school age are not in school. 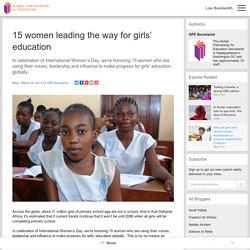 And in Sub-Saharan Africa, it’s estimated that if current trends continue that it won’t be until 2086 when all girls will be completing primary school. In celebration of International Women’s Day, we’re honoring 15 women who are using their voices, leadership and influence to make progress for girls’ education globally. This is by no means an exhaustive list – just a few out of millions of women who are helping make change happen. 1. Michelle Bachelet, President of Chile During her second non-consecutive term, President Bachelet in 2014 ushered through a far-reaching education reform program that raised the government’s investment in public education. 2.

By daring to go to school as a young teen, Malala defied Pakistani extremists and their violent attacks and became a global icon for the importance of educating girls. 3. 4. Through her philanthropy and advocacy at the Graça Machel Trust, Ms. 5. Mrs. 6. Why it’s hard for girls in rural India to stay in school. JUDY WOODRUFF: Fifteen years ago, the United Nations set a goal: By this year, every child in every nation should be able to obtain free basic education. 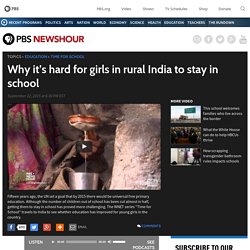 While the number of children out of school has been cut almost in half, there are still 57 million worldwide who have never set foot in a classroom. Hundreds of millions more have dropped out. PBS has been reporting on the global education crisis by following six children from different countries over 12 years, part of WNET’s documentary series “Time for School.” Tonight, we travel to India, where nearly 100 percent of children start primary school. The Malala Fund. Most girls Preeti’s village don’t go to school. 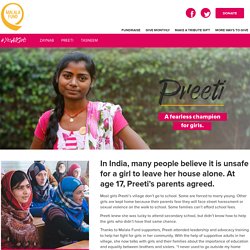 Some are forced to marry young. Other girls are kept home because their parents fear they will face street harassment or sexual violence on the walk to school. Some families can’t afford school fees. Preeti knew she was lucky to attend secondary school, but didn’t know how to help the girls who didn’t have that same chance. Thanks to Malala Fund supporters, Preeti attended leadership and advocacy training to help her fight for girls in her community. Today Preeti is looking toward the future with courage and determination.  Global Campaign For Education United States Chapter. By WomenOne Despite significant progress made in achieving the second Millennium Development Goal (MDG) of universal primary education, an estimated 63 million adolescents remain out of school. 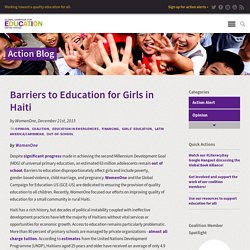 Barriers to education disproportionately affect girls and include poverty, gender-based violence, child marriage, and pregnancy. WomenOne and the Global Campaign for Education-US (GCE-US) are dedicated to ensuring the provision of quality education to all children. Recently, WomenOne focused our efforts on improving quality of education for a small community in rural Haiti. Haiti has a rich history, but decades of political instability coupled with ineffective development practices have left the majority of Haitians without vital services or opportunities for economic growth. Haiti is still recovering from the effects of the catastrophic earthquake that struck in 2010. Girls and Women - Africa Educational Trust. Across many of the communities and countries where we work, girls and women are missing out on the chance to access education. 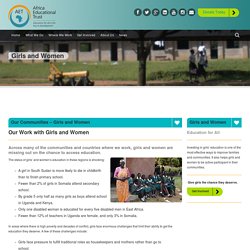 Women in Afghanistan: the back story. Afghanistan has a tumultuous recent past. 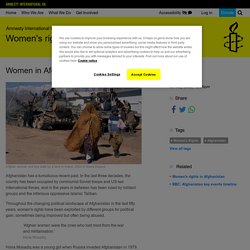 In the last three decades, the country has been occupied by communist Soviet troops and US-led international forces, and in the years in between has been ruled by militant groups and the infamous oppressive Islamic Taliban. Throughout the changing political landscape of Afghanistan in the last fifty years, women's rights have been exploited by different groups for political gain, sometimes being improved but often being abused. 'Afghan women were the ones who lost most from the war and militarisation.'Horia Mosadiq Horia Mosadiq was a young girl when Russia invaded Afghanistan in 1979. Before the 1979 invasion Think of women in Afghanistan now, and you'll probably recall pictures in the media of women in full-body burqas, perhaps the famous National Geographic photograph of 'the Afghan girl', or prominent figures murdered for visibly defending women's rights. 'As a girl, I remember my mother wearing miniskirts and taking us to the cinema.

Malala: The girl who was shot for going to school. Image copyright AFP One year ago schoolgirl Malala Yousafzai was shot in the head by Taliban gunmen - her "crime", to have spoken up for the right of girls to be educated. 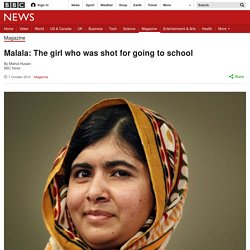 The world reacted in horror, but after weeks in intensive care Malala survived. Her full story can now be told. She is the teenager who marked her 16th birthday with a live address from UN headquarters, is known around the world by her first name alone, and has been lauded by a former British prime minister as "an icon of courage and hope". She is also a Birmingham schoolgirl trying to settle into a new class, worrying about homework and reading lists, missing friends from her old school, and squabbling with her two younger brothers. She is Malala Yousafzai, whose life was forever changed at age 15 by a Taliban bullet on 9 October 2012. The Swat Valley once took pride in being called "the Switzerland of Pakistan".