Reading and Writing Yourself to Gnosis: Philip K. Dick and the Exegesis – Evolve + Ascend. Philip K. 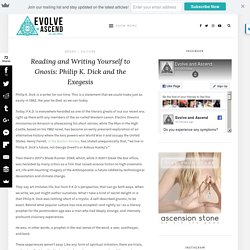 Dick is a writer for our time. This is a statement that we could make just as easily in 1982, the year he died, as we can today. Today, P.K.D. is everywhere heralded as one of the literary greats of our our recent era; right up there with any members of the so-called Western canon. Electric Dreams miniseries on Amazon is showcasing his short stories, while The Man in the High Castle, based on his 1962 novel, has become an eerily prescient exploration of an alternative history where the Axis powers won World War II and occupy the United States.

Henry Farrell, in the Boston Review, has stated unequivocally that, “we live in Philip K. Then there’s 2017’s Blade Runner: 2049, which, while it didn’t break the box office, was heralded by many critics as a film that raised science fiction to high cinematic art, rife with haunting imagery of the Anthropocene: a future riddled by technological devastation and climate change. These experiences weren’t easy. The (Cosmic) Fish. Strange Horizons - Estrangement and Cognition By Darko Suvin. Darko Suvin is one of the most important critics of science fiction. 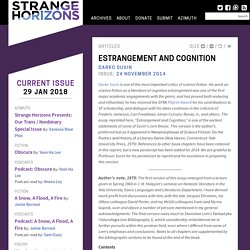 His work on science fiction as a literature of cognitive estrangement was one of the first major academic engagements with the genre, and has proved both enduring and influential; he has received the SFRA Pilgrim Award for his contributions to SF scholarship, and dialogue with his ideas continues in the criticism of Frederic Jameson, Carl Freedman, Istvan Csicsery-Ronay Jr., and others. The essay reprinted here, "Estrangement and Cognition," is one of the earliest statements of some of Suvin's core theses. This version is the author's preferred text as it appeared in Metamorphoses of Science Fiction: On the Poetics and History of a Literary Genre (New Haven, Connecticut: Yale University Press, 1979). References to other book chapters have been retained in this reprint, but a new postscript has been added for 2014. Author's note, 1979: The first version of this essay emerged from a lecture given in Spring 1968 in J. Mood Organ by Philip K. Dick from Do Androids Dream of Electric Sheep?

It is not clear, from the novel, exactly how the mood organ works. 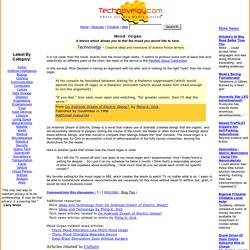 It seems to produce some sort of wave that acts selectively on different parts of the brain; the heart of the device is the Penfield Wave Transmitter. In this excerpt, Rick Deckard is having an argument with his wife, and is looking for the right "tune" from his mood organ. Do Androids Dream of Electric Sheep is a novel that makes use of androids (created beings that are organic, and are essentially identical to people). Haraway CyborgManifesto 1. JOHN C. Programming and Metaprogramming in THE HUMAN BIOCOMPUTER All human beings, all persons who reach adulthood in the world today are programmed biocomputers. 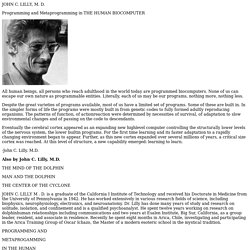 None of us can escape our own nature as programmable entities. Philip K. Dick Theorizes The Matrix in 1977, Declares That We Live in "A Computer-Programmed Reality” JOHN C. Strange Horizons - Estrangement and Cognition By Darko Suvin. Introducing the Guidelines. Data mining. Notabilia – Visualizing Deletion Discussions on Wikipedia. Processing.org. History flow. In the Visualization and Behavior Group we take the perspective that data visualization should make data analytics accessible to anyone, not just the data's experts. 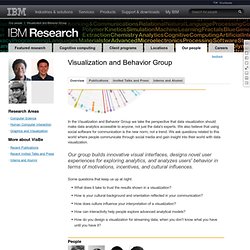 We also believe that using social software for communication is the new norm, not a trend. We ask questions related to this world where people communicate through social media and gain insight into their world with data visualization. Our group builds innovative visual interfaces, designs novel user experiences for exploring analytics, and analyzes users' behavior in terms of motivations, incentives, and cultural influences. Some questions that keep us up at night: What does it take to trust the results shown in a visualization? Previous Projects. Wikipedia article traffic statistics (upgrading, temporarily unavailable) Total Dick-Head. Philip K. Dick - Science Fiction Author - Official Site. Thephildickian.com - Specializing in Philip K. Dick, Sci-Fi and Radical Movement. Your source for hard to find books.

TEDxNYED - David Wiley - 03/06/10. Open textbook. An open textbook is a textbook licensed under an open copyright license, and made available online to be freely used by students, teachers and members of the public. 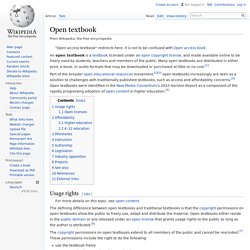 Many open textbooks are distributed in either print, e-book, or audio formats that may be downloaded or purchased at little or no cost.[1] Part of the broader open educational resources movement,[2][3] open textbooks increasingly are seen as a solution to challenges with traditionally published textbooks, such as access and affordability concerns.[4] Open textbooks were identified in the New Media Consortium's 2010 Horizon Report as a component of the rapidly progressing adoption of open content in higher education.[5] Usage rights[edit] The defining difference between open textbooks and traditional textbooks is that the copyright permissions on open textbooks allow the public to freely use, adapt and distribute the material. Open licenses[edit] Some examples of open licenses are: Affordability[edit] Higher education[edit] Philip K. Dick Press Release - MARVEL UNVEILS PHILIP K DICK'S ELECTRIC ANT #1.