Inactivity costing the UK 14.2 billion euros a year with 37 per cent of adults insufficiently active. UK cost of inactivity (taken from Inactivity Time Bomb infographic) A recent study has estimated that inactivity is costing Europe's economy over 80 billion euros per year, reports BikeBiz. 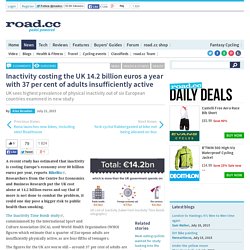 Researchers from the Centre for Economics and Business Research put the UK cost alone at 14.2 billion euros and say that if more is not done to combat the problem, it could one day pose a bigger risk to public health than smoking. The Inactivity Time Bomb study, commissioned by the International Sport and Culture Association (ISCA), used World Health Organisation (WHO) figures which estimate that a quarter of European adults are insufficiently physically active, as are four-fifths of teenagers. The figures for the UK are worse still – around 37 per cent of adults are insufficiently active, failing to perform at least 150 minutes of moderate-intensity activity or 75 minutes of vigorous intensity activity per week. 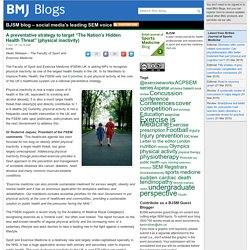 In its Manifesto to Improve Public Health, the FSEM sets out 8 priorities to put physical activity at the core of the UK’s healthcare system via a national preventative strategy. Physical inactivity is now a major cause of ill health in the UK, equivalent to smoking and alcohol abuse[i], it is also a much larger health threat than obesity[ii] and directly contributes to 1 in 6 deaths. [iii] Currently, physical activity is not a frequently used health intervention in the UK and the FSEM calls upon politicians, policymakers and the next Government to address this. BMJ Blogs: BJSM blog – social media's leading SEM voice » Blog Archive » A preventative strategy to target “The Nation’s Hidden Health Threat” (physical inactivity) BHF National Centre - physical activity + health. 23 October 2014 This evidence briefing summarises the key facts on the total cost of disease and the costs that can be attributed to physical inactivity for: cardiovascular diseasecancertype 2 diabetesobesityfalls. 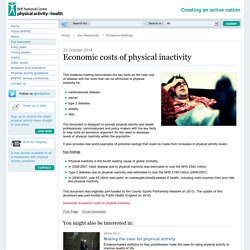 The document is designed to provide physical activity and health professionals, commissioners and policy makers with the key facts to help build an economic argument for the need to decrease levels of physical inactivity within the population. How bad is watching TV for your health? The authors then investigated the impact of sedentary behaviour over time on diabetes incidence and found for all participants, the risk of developing diabetes increased approximately 3.4% for each hour spent watching TV after adjustment for age, sex, intervention and time-dependent leisure physical activity. ''Future lifestyle intervention programmes should emphasise reducing television watching and other sedentary behaviours in addition to increasing physical activity,'' the study said. 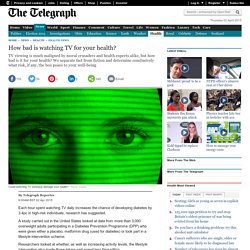 The health case against TV It can increase the risk of diabetes It can be damaging for children's mental health It can increase children's blood pressure Experts say it is as dangerous as smoking or being overweight The TV case for TV Game of Thrones: Among the best TV ever made? The Effects of Stress on Physical Activity and Exercise. BMJ Blogs: BJSM blog – social media's leading SEM voice » Blog Archive » Why Physical Inactivity is the Cinderella of non-communicable diseases: 8 common myths de-bunked. By Thea Franke and Christina Thiele Originally published on the Centre for Hip Health and Mobility’s blog (Follow: ) Much like Cinderella, physical inactivity goes under-recognized and largely under-appreciated. 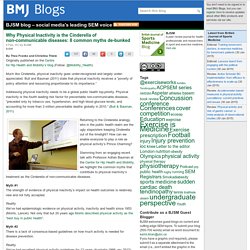 Bull and Bauman (2011) state that physical inactivity receives a “poverty of policy attention and resourcing proportionate to its importance.” Addressing physical inactivity needs to be a global public health top-priority. Physical inactivity is the fourth leading risk factor for preventable non-communicable diseases, “preceded only by tobacco use, hypertension, and high blood glucose levels, and accounting for more than 3 million preventable deaths globally in 2010.” Returning to the Cinderella analogy, who in the public health realm are the ugly stepsisters keeping Cinderella out of the limelight? Move to tackle sedentary behaviour. The event is also expected to ask whether attempts to cut falls among elderly people are putting their health at risk by encouraging them to spend too much time sitting down. 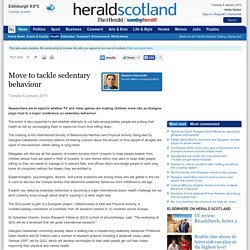 The meeting of the International Society of Behavioural Nutrition and Physical Activity being held by Glasgow Caledonian University reflects increasing concern about the amount of time people of all ages are spent in 'non-exercise', either sitting or lying down. Delegates will discuss all the aspects of modern society which conspire to keep people seated, from children whose lives are spent in front of screens, to care homes which may want to keep older people sitting so they are easier to manage or to prevent falls, and offices which encourage people to work long hours at computers without the breaks they are entitled to.

Ment: Australia vying to be world champion of inactivity. By Tim Olds, University of South Australia It turns out we actually have a beautiful window on the past. 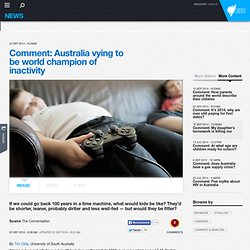 In 1919, a young woman named E.M. Bedale started postgraduate research at University College London, an uncommon undertaking for a woman at that time. Her studies focused on energy balance in children, which led her to spend several years at a serendipitously eponymous school called Bedales in rural Hampshire. During her two years at Bedales, Miss Bedale measured the energy expenditure and intake of the school’s students, using methods that are still considered to be gold standards today.

Her data provide a startling contrast to our time. Clearly, we’re now in the grip of an inactivity epidemic. A shrinking world. Why sitting too much is bad for your health. We all know we need to be more active, but there is increasing evidence that we need to spend less time sitting down as well. 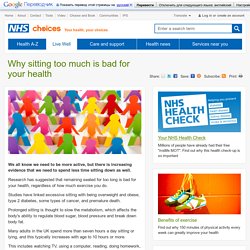 Research has suggested that remaining seated for too long is bad for your health, regardless of how much exercise you do. Studies have linked excessive sitting with being overweight and obese, type 2 diabetes, some types of cancer, and premature death. Prolonged sitting is thought to slow the metabolism, which affects the body's ability to regulate blood sugar, blood pressure and break down body fat. Many adults in the UK spend more than seven hours a day sitting or lying, and this typically increases with age to 10 hours or more. This includes watching TV, using a computer, reading, doing homework, travelling by car, bus or train – behaviours referred to as sedentary – but does not include sleeping.

Having desk job 'doubles risk' of heart attack. Monday October 15 2012 It is estimated that 4 in 5 people in the UK have a desk job ‘Sitting for long periods increases the risk of diabetes, heart disease and death, researchers suggest’ BBC News reports. 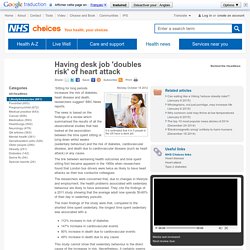 The news is based on the findings of a review which summarised the results of all the observational studies that had looked at the association between the time spent sitting or lying down whilst awake (sedentary behaviour) and the risk of diabetes, cardiovascular disease, and death due to cardiovascular disease (such as heart attack) or any cause. Physical Inactivity May Be as Deadly as Smoking. Failure to Get Recommended Amounts of Activity Is Tied to Heart Disease, Diabetes, and Cancer WebMD News Archive July 17, 2012 -- Not moving enough may be as hazardous to your health as smoking, a new study shows. 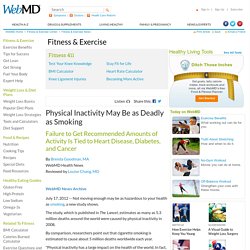 The study, which is published in The Lancet, estimates as many as 5.3 million deaths around the world were caused by physical inactivity in 2008. By comparison, researchers point out that cigarette smoking is estimated to cause about 5 million deaths worldwide each year. "Physical inactivity has a large impact on the health of the world. Experts who were not involved in the research questioned that claim, however. Timothy Armstrong, PhD, coordinator of the surveillance and population-based prevention program for the World Health Organization (WHO) in Geneva, Switzerland, points out that his organization estimates that inactivity causes fewer deaths -- about 3.2 million deaths around the world each year.

Why sitting too much could be bad for your health - British Heart Foundation. Most of us could benefit from spending less time sitting down, and that applies even if you’re keeping active, as Sarah Brealey explains. Most of us know that being active is good for our health. But more evidence is emerging that even if you exercise regularly, spending a lot of time sitting down can be bad for you. Professor Stuart Biddle, Professor of Physical Activity and Health, based until recently at the BHF National Centre in Loughborough, explains: “We sit too much, and research suggests that this is not very good for you. The poor health effects from too much sitting are separate from whether you are physically active or not. They are separate behaviours in the same way that smoking is different from diet.” Physical activity and all-cause mortality across levels of overall and abdominal adiposity in European men and women: the European Prospective Investigation into Cancer and Nutrition Study (EPIC)

Lack of exercise responsible for twice as many deaths as obesity. Physical inactivity has been consistently associated with an increased risk of early death, as well as being associated with a greater risk of diseases such as heart disease and cancer. Although it may also contribute to an increased body mass index (BMI) and obesity, the association with early death is independent of an individual’s BMI. To measure the link between physical inactivity and premature death, and its interaction with obesity, researchers analysed data from 334,161 men and women across Europe participating in the European Prospective Investigation into Cancer and Nutrition (EPIC) Study. Between 1992 and 2000, the researchers measured height, weight and waist circumference, and used self-assessment to measure levels of physical activity. The participants were then followed up over 12 years, during which 21,438 participants died.

The results are published today in the American Journal of Clinical Exercise. Reference Ekelund, U et al. Report encourages organisations to address health needs of young people. PHE continues to see poorer outcomes for young people in England when compared to many other high-income countries: teenage birth and abortion rates remain among the highest in Europe, and the proportion drinking alcohol is still well above the European average.

Inequalities also persist, with poor health outcomes more common among the poorest young people. Professor Kevin Fenton, National director of Health and Wellbeing, Public Health England, said: "Addressing the specific health needs of young people is critical to ensuring their future health and happiness. The cost of being unhealthy. 25 January 2015Last updated at 22:26 ET We eat too much, drink too much and don't get enough exercise. It's that simple. And if you think that doesn't apply to you, you're probably wrong. Are We Sitting on a Major Health Risk? 23 and 1/2 hours: What is the single best thing we can do for our health? Children and the Dangers of Excessive Sitting.

Updated January 25, 2015. A recent study, published in the Annals of Internal Medicine, had adults everywhere suddenly applying their brains to the placement of their backsides. This is only right, since the study suggested that by putting our backsides into seats so much of the time, we were shortening our lives- whether we exercise or not. I have already opined at some length on what I think this study actually means, so I won’t do so again here. Here, I will emphasize something thus far left out of the discussion altogether: children.

If sitting hours a day does, or even might, take years from life, then it stands to reason that the greater the portion of one’s life one spends sitting hours a day, the worse the effect. Well, most of us grew up at a time when recess was routine, and gym class (or “Phys Ed”) was a standard part of the schedule. Any teacher could have told you that was a bad thing. Well, it’s all related. Major NHS action needed to tackle physical inactivity – say Scottish medical leaders Latest Royal College of Physicians and Surgeons of Glasgow.