Exercise referral schemes to promote physical activity... PH54. This is an extract from the guidance. 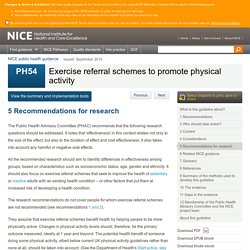 The complete guidance is available at guidance.nice.org.uk/ph54 The Public Health Advisory Committee (PHAC) recommends that the following research questions should be addressed. It notes that 'effectiveness' in this context relates not only to the size of the effect, but also to the duration of effect and cost effectiveness. It also takes into account any harmful or negative side effects. All the recommended research should aim to identify differences in effectiveness among groups, based on characteristics such as socioeconomic status, age, gender and ethnicity. The research recommendations do not cover people for whom exercise referral schemes are not recommended (see recommendations 1 and 2). 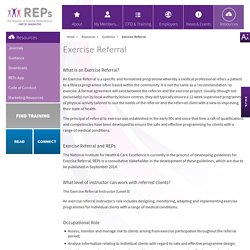 An Exercise Referral is a specific and formalised programme whereby a medical professional refers a patient to a fitness programme often based within the community. It is not the same as a ‘recommendation’ to exercise. A formal agreement will exist between the referrer and the exercise project. Usually (though not exclusively) run by local authority leisure centres, they will typically ensure a 12 week supervised programme of physical activity tailored to suit the needs of the referrer and the referred client with a view to improving their state of health.

The principal of referral to exercise was established in the early 90s and since that time a raft of qualifications and competencies have been developed to ensure the safe and effective programming for clients with a range of medical conditions. D.C. doctor’s Rx: A stroll in the park instead of a trip to the pharmacy. Unity Health Care pediatricians Robert Zarr and María Rueda-González walk in Meridian Hill Park. 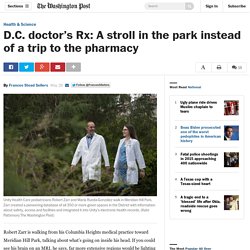 Zarr created a pioneering database of all 350 or more green spaces in the District with information about safety, access and facilities and integrated it into Unity's electronic health records. (Kate Patterson/The Washington Post) Robert Zarr is walking from his Columbia Heights medical practice toward Meridian Hill Park, talking about what’s going on inside his head. If you could see his brain on an MRI, he says, far more extensive regions would be lighting up than if he were having this same conversation sitting at his desk. Zarr, a pediatrician at Unity Health Care’s Upper Cardozo Health Center, has a special interest in the unseen benefits of getting outside. Zarr mentions obesity, diabetes and mental health disorders as he walks.

Hence the D.C. parks prescription program. Zarr is taking on a historically in­trac­table challenge, tackled by John F. Healing power of outdoors Go outside. Ukactive. 23,000 Essex residents to be offered support to get active Let's Get Moving, a proven service that supports people to be more physically active, is to be rolled out across West Essex GP surgeries in June, supporting up to 23,000 residents. 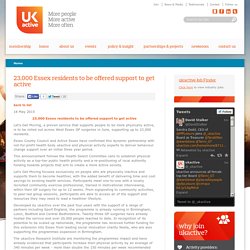 Essex County Council and Active Essex have confirmed this dynamic partnership with not-for-profit health body ukactive and physical activity experts to deliver behaviour change support over an initial three year period. This announcement follows the Health Select Committee calls to establish physical activity as a top-tier public health priority and a re-positioning of local authority funding towards projects that aim to create a more active society. Let's Get Moving focuses exclusively on people who are physically inactive and supports them to become healthier, with the added benefit of delivering time and cost savings to existing health services.

-ends- About ukactive. How the UK is lagging behind Europe in health - UK - News - The Independent. Moderate exercise: The UK is ranked 16th compared to the other 27 EU countries, such as Netherlands where as few as 14 per cent do no brisk exercise, and Denmark and Finland, where the proportion is 23 per cent. 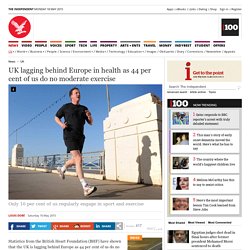 Regular sport: On the positive side, the UK is above average for the amount of people regularly exercising or playing sport. The UK placed 12th for regular physical exercise with 10 per cent of us engaging in the activity frequently. Sedentary behaviour: The UK was 10th for the worst sedentary behaviour, with 13 per cent of the UK sat on their rear for over eight and a half hours a day. The BHF has advised that inactivity is contributing to more people suffering from coronary heart disease, costing the UK an estimated £542 million a year. Catherine Kelly, Director of Prevention, Survival and Support at the BHF, said: “Today’s figures are a worrying indication of the overall picture of our nation’s heart health.