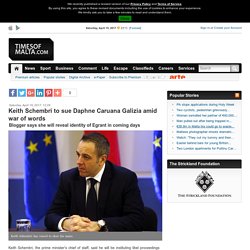 Keith Schembri, the prime minister's chief of staff, said he will be instituting libel proceedings against Daphne Caruana Galizia, minutes after she implicated him in claims of bank transfers from Azerbaijan. In a blog post this morning, Ms Caruana Galizia said that very large sums of money had been transferred from the bank account of a company owned by politically exposed persons in Azerbaijan. Doctors have decades of experience fighting “fake news.” Here’s how they win. Alisa Miller: How the news distorts our worldview. The New York Times will not save us from "fake news," let alone neofascism - Frontpage.

Since the election of Trump, mainstream newspapers like the New York Times have enjoyed a surge in subscribers as readers turn to journalists to scrutinize and fact-check the administration's outrageous claims. 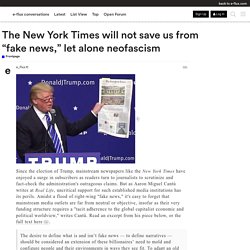 But as Aaron Miguel Cantú writes at Real Life, uncritical support for such established media institutions has its perils. Amidst a flood of right-wing "fake news," it's easy to forget that mainstream media outlets are far from neutral or objective, insofar as their very funding structure requires a "tacit adherence to the global capitalist economic and political worldview," writes Cantú. Read an excerpt from his piece below, or the full text here16. Evan McMullin’s 10-point guide to living under a potentially “authoritarian” Trump — Quartz. Like thousands of other Londoners, Jolyon Maugham took an Uber this morning (Mar. 20). 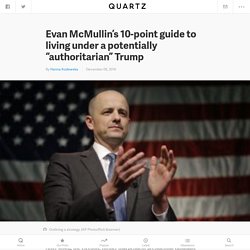 For the service of being driven from his office to Uber’s UK headquarters, he paid £9.86 ($12). Had the driver known what the accomplished tax lawyer was about to do next, he would not have accepted the ride request. Maugham was there to hand deliver a letter that would become the first step of suing the $68-billion startup for tax avoidance. 7 psychological concepts that explain the Trump era of politics. 2016 Lie of the Year: Fake news. Ignoring the facts has long been a staple of political speech. 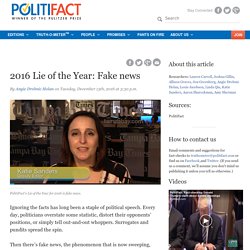 Every day, politicians overstate some statistic, distort their opponents’ positions, or simply tell out-and-out whoppers. Surrogates and pundits spread the spin. Then there’s fake news, the phenomenon that is now sweeping, well, the news. Fake news is made-up stuff, masterfully manipulated to look like credible journalistic reports that are easily spread online to large audiences willing to believe the fictions and spread the word. Why Fox News just can't quit Donald Trump. Transcript: President Trump’s speech to Congress, annotated by Vox staff. Thank you very much. 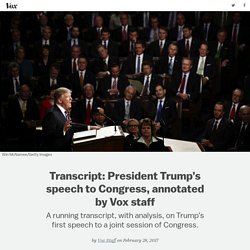 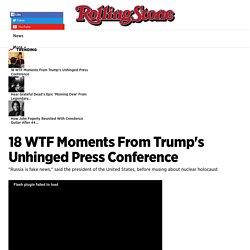 The hastily called press conference came as a surprise to reporters, who would typically have had a briefing with White House Press Secretary Sean Spicer during that time. (According to reports, Trump walked into the Oval Office earlier that morning and said, "Let's do a press conference today. ") How Steve Bannon sees the world. Kellyanne Conway's interview tricks, explained. How should the media cover a White House that isn't afraid to lie? A top Putin critic on how to oppose Trump: “making him look like a loser is crucial” John Oliver bought ads on Trump’s favorite cable news shows to correct the president’s lies.