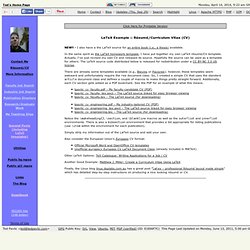 - I also have a the LaTeX source for an entire book (i.e., a thesis) available. In the same spirit as the LaTeX homework template, I have put together my own LaTeX résumé/CV template. Actually, I've just revised my own CV and released its source. Hopefully the source can be used as a template for others. The LaTeX source code distributed below is released for redistribution under a CC BY-NC 3.0 US license. There are already some templates available (e.g., Blevins or Paciorek); however, these templates seem awkward and unfortunately require the res document class. Notice the \makeheading{}, \section, and \blankline macros as well as the outerlist and innerlist environments. Simply strip my information out of the LaTeX source and add your own. Also consider the European Union's Europass CV format: Miklós Csürös: latex. Resume class An example resume: the LaTeX source and the resulting PostScript or PDF. handout class Documentation in PostScript or PDF. 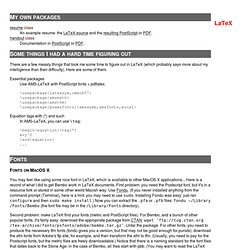 There are a few measly things that took me some time to figure out in LaTeX (which probably says more about my intelligence than their difficulty). Here are some of them. Essential packages Use AMS-LaTeX with PostScript fonts + pdflatex. \usepackage{latexsym,cmmib57} \usepackage{amsmath} \usepackage{amsthm} \usepackage[psamsfonts]{amssymb,amsfonts,eucal} Equation tags with (*) and such In AMS-LaTeX, you can use \tag: \begin{equation}\tag{*} x=y^2 \end{equation} ... Fonts on MacOS X You may feel like using some nice font in LaTeX, which is available to other MacOS X applications... Second problem: make LaTeX find your fonts (metric and PostScript files). Make LaTeX and dvips aware of the new files: sudo texhash. Luc's fonts There are many free fonts available at the Web. (These instructions are for an older Unix machine I used to use.) Pach Bazooka Waaiberg TropDePoils.

Help On LaTeX Commands. Table of Contents Help by Subject, Command, or Environment Subjects LaTeX Commands A LaTeX command begins with the command name, which consists of a \ followed by either (a) a string of letters or (b) a single non-letter. 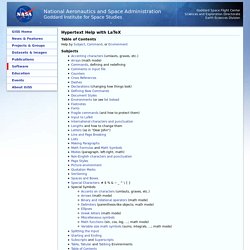 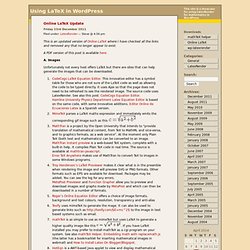 Before you get too excited this assumes You are using at least WordPress 1.2 (which uses plugins)You have the latest files which don’t eat backslashes (detailed on page 2) If not, you can still use the method in 5th August’s post. Also you will need to put some information about where to find files in the latexrender files. MultiMarkdown. BibDesk. TeXShop. TeXShop (v 3.26) Release 11/05/2013 (for Lion, Mountain Lion, Mavericks) TeXShop (v 3.33) Experimental Release 04/11/2014 TeXShop (v 2.47) Release 06/06/2012 (System 10.5 or Higher Strongly Recommended) (for Systems 10.4, 10.5, 10.6) Richard Koch with contributions by Max Horn, Dirk Olmes, Mitsuhiro Shishikura, Seiji Zenitani, Yusuke Terada, Martin Kerz, Isao Sonobe, and Many Others TeX Live 2013 Release June, 2013 TeX Users Group (TUG) and MacTeX TeXnical working group TeXShop is distributed under the GPL public license, and thus free. 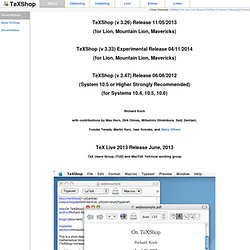 SCons: A software construction tool. Managing a one-person TeX system. The XeTeX typesetting system. You are here: Home Short URL: Click on the map above to watch animated presentations on scripts. 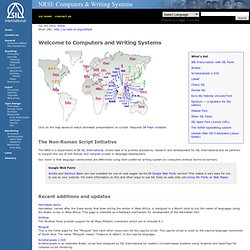 Requires Flash installed. The Non-Roman Script Initiative The NRSI is a department of SIL International, whose task is to provide assistance, research and development for SIL International and its partners to support the use of non-Roman and complex scripts in language development. Our vision is that language communities are effectively using their preferred writing system on computers without technical barriers. Recent additions and updates Harmattan alpha Harmattan, named after the trade winds that blow during the winter in West Africa, is designed in a Warsh style to suit the needs of languages using the Arabic script in West Africa.

ShiShan The ShiShan fonts provide support for all Miao (Pollard) characters which are in Unicode 6.1. Mingzat This is the home page for the "Mingzat" font (and other resources) for the Lepcha script. New and improved Graphite website! Articles of general interest.