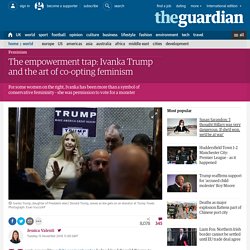 We can expect, in the days ahead, to see Republicans pointing to these votes as proof that women love Trump, and that the openly misogynist president-elect really does have their best interest at heart. What will make this placation dangerous is that the incoming administration has a ready-made symbol to prop up their lie: Ivanka Trump. Trump’s dutiful daughter brands herself as a sort of Sheryl Sandberg-lite: she launched a Women Who Work campaign, was the catalyst behind her father’s vague maternity leave proposal, and carefully curates her social media accounts to present herself as a glamorous but accessible working mom. Top French offices stop work in support of gender pay gap protest. Staff at some of Paris’s most high-profile political and cultural offices stopped work at 4.34pm on Monday in solidarity with a protest against women being paid less than men. 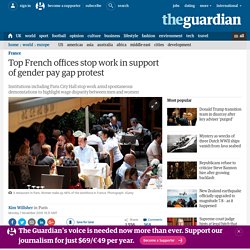 Women’s rights campaigners at the feminist newsletter Les Glorieuses had urged female workers to down tools from that time. They suggested that doing so until the end of the year – in effect taking 38.2 days off – would highlight the global wage disparity that experts say will not disappear until 2186. “From 7 November at 16.34 [and seven seconds] women will be working ‘voluntarily’,” Les Glorieuses wrote, referencing research that women work for free, compared with men, for a certain time of the year. Gender pay gap closing but still wide.

Ben Harvey - The West Australian The latest official report into gender equality in the workplace has shown corporate Australia has made inroads but the chasm between what men and women earn is still huge. 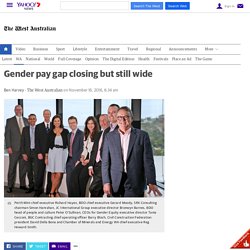 The new study by the Workplace Gender Equality Agency, an Australian Government statutory agency charged with improving equality in the workplace, found women account for half of the workforce but only 16.3 per cent of chief executive roles and 37.4 per cent of all management roles. Women earned 77 per cent of the male average full-time income. The average full-time female employee made $26,853 less than her male counterpart last financial year. Tackling gender inequality 'could add £10tn to world economy' Governments must take the lead on reducing gender inequality to unlock almost £10tn of additional global economic output, a report argues. 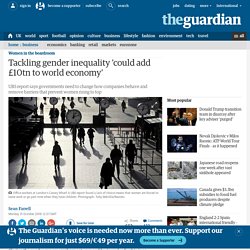 Closing the gender gap on employment, pay and business leadership is an important source of growth in an environment of persistently sluggish figures, UBS Wealth Management says. If countries increase national female participation rates to match the best in their region it could add $12tn (£9.9tn), or 11%, to the world economy by 2025, a recent McKinsey study found. Immoral hazard: the gender inequality of risk. Whilst the international media reported that over 800 people died in Haiti due to the impact of the recent Hurricane Matthew, a gender breakdown was not given even though your chances of surviving a natural disaster often depends on your sex. 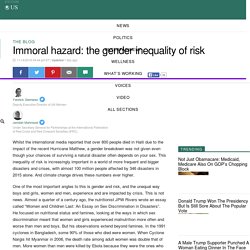 This inequality of risk is increasingly important in a world of more frequent and bigger disasters and crises, with almost 100 million people affected by 346 disasters in 2015 alone. And climate change drives these numbers ever higher. Ashley Graham Now Has Her Own Barbie [Video] Ashley Graham is one of the most prominent plus-size models in the industry — maybe the most. 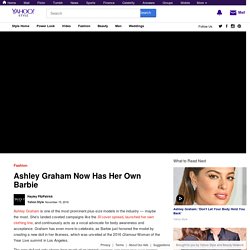 She’s landed coveted campaigns like the SI cover spread, launched her own clothing line, and continuously acts as a vocal advocate for body awareness and acceptance. Graham has even more to celebrate, as Barbie just honored the model by creating a new doll in her likeness, which was unveiled at the 2016 Glamour Woman of the Year Live summit in Los Angeles. The new doll not only shows how much of an impact Graham and other plus-size models have made on society, but it also signifies Barbie’s effort to incorporate all body types in its line of products. “Ashley Graham is a trailblazer who inspires every woman — and girl — to see the beauty in herself,” said Lisa McKnight, general manager of Barbie, in a press release. Malala Yousafzai Wants To Be The Prime Minister Of Pakistan - Motto. Malala Yousafzai may only be 19 years old, but she’s already accomplished more than most people aspire to in a lifetime. 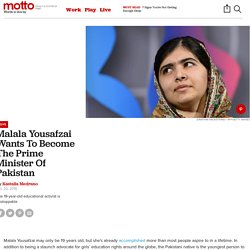 In addition to being a staunch advocate for girls’ education rights around the globe, the Pakistani native is the youngest person to ever win a Nobel Peace Prize and she also has a bestselling memoir under her belt. Now, she’s revealing one more goal: to one day become the prime minister of Pakistan. Speaking at the Investing in the Future conference in the United Arab Emirates on Wednesday, Yousafzai said she hopes her latest dream would enable her to help girls and women more fully reach their potential in her home country. “But when I saw women role models, it broadened my vision,” Yousafzai said according to Gulf News. Women are calling the Trump campaign about their periods. One Utah woman called Donald Trump’s presidential campaign on Friday with a question: Where should she send her used tampons in case of a miscarriage? 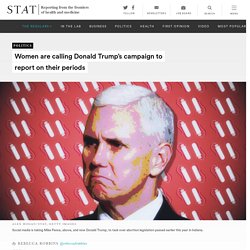 An Indiana woman called with a different query: Could she go swimming, or would the chlorine in the water be harmful to her unfertilized eggs? And a Colorado woman had a message for the campaign: She may have lost a couple hundred eggs just today. The flood of calls, reported in comments on Facebook, are part of a social media push started by women in Indiana opposed to a restrictive abortion law passed earlier this year in Indiana that required the remains of a miscarried or aborted fetus to be buried or cremated.